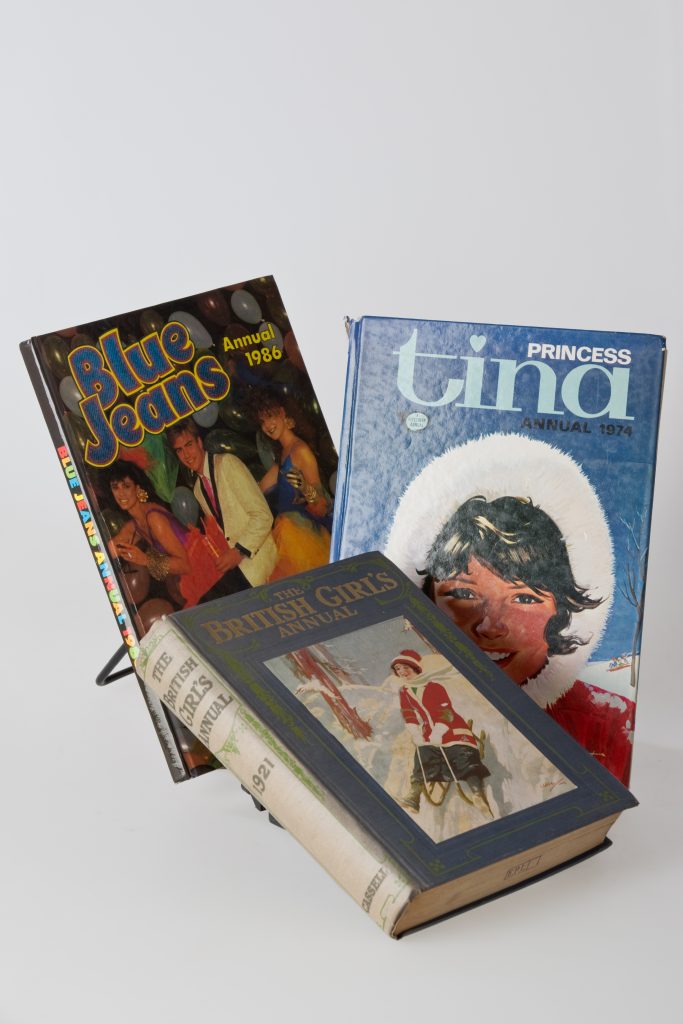 Desperate Dan gets his skates on

A friend told me that he used to love Christmas annuals because they were multi-functional.

“At Christmas, you’d read the stories and do all the puzzles and quizzes,” he said. “Then in the Spring, we’d dig them out and use them as improvised skateboards.”

“We used to balance an annual on top of one of those metal skates – the sort with leather straps that you tie directly onto your feet. Then we’d sit on top and barrel off down the hill.”

He reckoned that he’d be flung off this precarious contraption nine times out of ten, and recalled how furious his mother was at the state of his shoes afterwards. (The heels were worn right down, from excessive use as brakes.)

This story was the initial inspiration for my 26 Winters sestude for the Museum of Childhood in Edinburgh.

Next, I went looking for old Christmas annuals in charity shops and secondhand bookshops, and came across a 1975 copy of The Dandy. Two characters leapt off the page and into my sestude: Desperate Dan and Sir Coward de Custard.

At the top of the hill, the boy feels like Desperate Dan, the square-jawed cowboy who devours Cow Pie and feels no fear. But as he speeds down the hill, he’s transformed into Sir Coward de Custard, a wobbling milksop of a knight whose fighting tactics are to a) run away and b) run away faster.

And by the way, if you’re ever in need of a terrible joke, have a look at that 1975 Dandy Christmas annual. Here’s a taster. “Meet Mrs Sweather and her sun-tanned daughter, Gloria Sweather.”