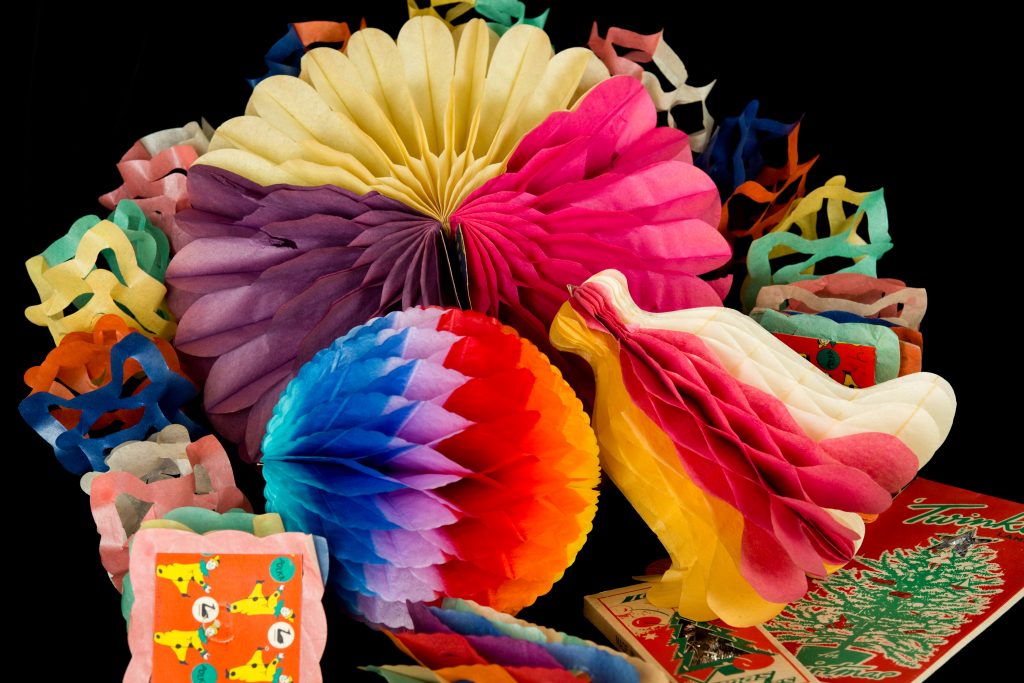 Unwrapping a box of Christmas decorations is rather like experiencing Christmas itself. The anticipation. The excitement at what will be revealed. The careful handling of precious yet familiar items, layered with memory, stuck together with Sellotape and string.

Then the unveiling, that moment of magic. The hanging on the tree.

Only for the weeks to pass, the year to turn. And suddenly those same decorations seem faded, past their best, ready to be folded away once again.

It was this dual sense of wonder and melancholy that I experienced as I unpacked my own box of Christmas decorations at Edinburgh’s Museum of Childhood. And which I wanted to capture somehow within my sestude.

The oldest decorations in the box – a packet of thin silver strips called ‘Twinkles’ and another of spirals known as ‘Icicles’ – were donated by a Miss Graham Montgomery in the year of her death, 1958.

This was the same Miss Montgomery who gifted one of the museum’s most treasured items – the Stanbrig Eorls doll’s house – a monument to perpetual childhood, two thousand miniature objects and real electric light. Members of the public used to pay to see it on display.

But to me these unassuming, yet strangely weighty, silver ephemera (probably made of lead, a common material at that time), conjured a different vision. Not of a child playing with a tiny ham, but an old lady revisiting the magic of Christmas for one last time. Soon to be replaced by the rest of the box’s contents: multi-coloured tissue-paper balls, bells and streamers from the ‘70s, donated by a car collector who didn’t even leave his name.

Even they are somewhat faded now.