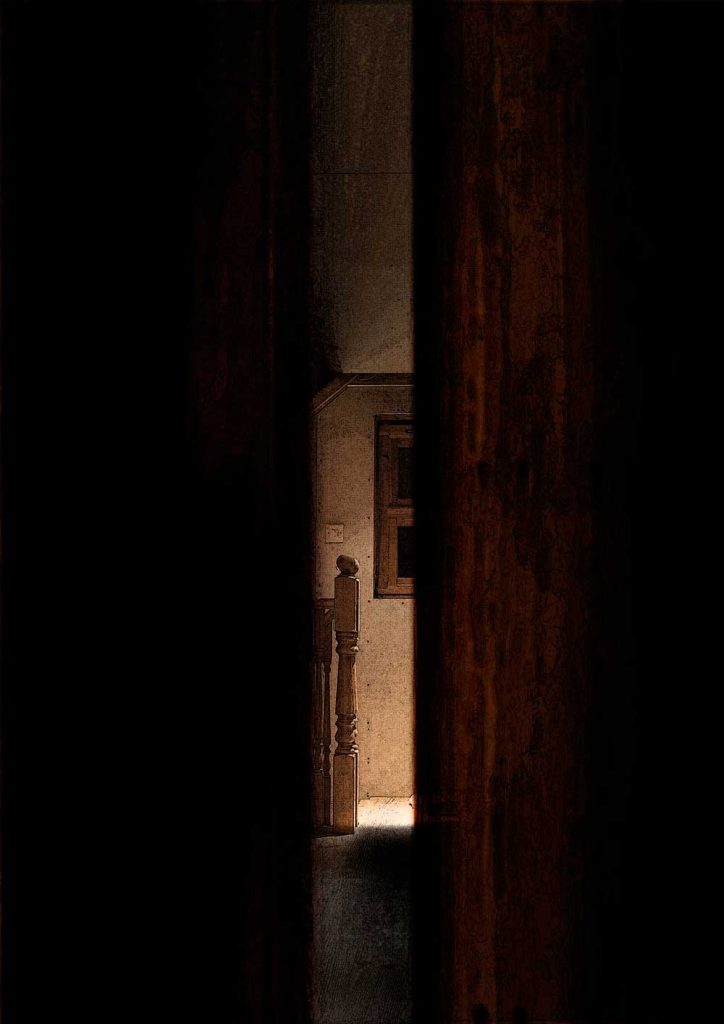 Callum could hear the others moving around on the floors below – someone hammered up the main stairs. Voices shouted: ‘Not here!’

Sooner or later one of them – Jake, surely – would work it out, and steel himself to climb the bare, narrow stairs to this shunned room. He would tease open the wardrobe door, and Callum could spring from the shadows: ‘BOO!’ Callum grinned. Then they would both squeeze into his secret wooden cell, stifling giggles, and wait for the next one.

Ben was such a twat, Callum thought. Telling them all it was ‘best not to hide in the attic room.’ Trying to scare everyone with his spooky stories.

‘Seriously. Don’t,’ Ben had said, obviously trying to sound grown-up. ‘Grandad told me that room was like George’s special place. He said it was George’s “hidey-hole.” George doesn’t like people going in there.’

‘How does he know its name?’ Callum had sneered. ‘Ghosts don’t have names.’

‘It’s not his real name, obviously,’ poncey little Ben had explained, in a tone that suggested Callum was being stupid. ‘Grandad decided to name him. He said if they were going to have a ghost, they might as well give it a name.’

‘That’s such bollocks,’ Callum said loudly, pleased to catch a couple of shocked looks among the other guests.

Ben shrugged. ‘I’m just saying. There are lots of other places.’

It was a stupid party, anyway. Ben was stupid. He was so small and stupid even his dad couldn’t stand him. Ben’s dad had ‘walked out,’ Callum’s own father had told him. Now Ben and his mum lived with his grandad in this dingy old place. It hadn’t even been decorated for about 100 years: there was still weird, old-fashioned wallpaper on the walls with lumpy patterns. The carpets were faded and thin.

‘Ben will need lots of friends now,’ Callum’s mum had said. ‘Look out for him, won’t you?’

Callum smiled in the gloom. He and Jake had looked out for Ben all right. Three days ago they waited behind the hedge at the park, looking out for him. When the other boy appeared, swinging his book bag, they had sprung on him and shoved him over, face down in the dew-damp grass. Jake sat on his back while Callum shoved leaves, grass and earth down Ben’s shorts. His final touch had been daring, even for him: half a dog turd, scooped up in a handful of leaves and pressed into Ben’s waistband. Callum and Jake mashed it in through the fabric, squealing.

‘You stink so much even your dad hates you,’ Callum had told Ben, while Jake climbed off him. Ben didn’t move. He just lay where he was, silent and motionless. He was breathing hard, and his eyes were closed, but he didn’t cry. That was weird – and irritating, somehow.

‘Come on,’ Jake had said, grabbing at Callum’s sleeve, and they had disappeared through the gap in the hedge and up the road to school.

Stupid Ben. Callum pulled a face, tucking himself more tightly into the back of the wardrobe. Now he’d invited Callum to his bloody birthday party.

Except he hadn’t really, of course. Not even Ben could be that stupid. It was Ben’s mum. She came round and sat with Callum’s in their kitchen, drinking coffee. Afterwards, Callum’s mum said, ‘Ben really needs a nice big birthday party, to cheer him up.’ Sure enough, Callum was invited: there was no way out. His mum even tried to pretend that Ben had asked especially for him to come. Like that would ever happen.

He shifted in the wardrobe, his backside feeling numb. Where was everyone?

The house had fallen silent: they must be searching downstairs again. How long did it take to work it out? Or were they all just too scared to come up?

‘Come on Jake,’ Callum muttered. His voice sounded smaller than he liked in the gloom. Instead he tried a heavy, theatrical sigh – but that was worse. The faint echo in the stale wooden box sounded unpleasantly like someone else breathing nearby.

He peered out through the narrow gap at the wardrobe door. He’d left it slightly ajar – no harm in giving them a clue. The converted attic beyond was cramped and dim, lit only by the flat afternoon light creeping in through the cobwebbed window. Callum could see a pile of packing boxes, the end of a rolled-up rug, and a slice of the room’s own doorway. He would be able to spot whoever came in as soon as they arrived, and be ready to jump out at them.

Inside, the wardrobe was empty except for a dozen or so starved metal coat-hangers, spaced out along a thin steel rail above him. They reminded Callum of the skeleton of a boned fish. The air was old and musty, like the books in churches, and the timber itself cool and chalk-dry. Feeling it under his hands, he found himself thinking of his grandmother’s skin – thin, bloodless and papery. Half-consciously, Callum lifted his hands from the wood: it was too easy to imagine it flaking underneath them – or twitching.

A door slammed somewhere below, and then another. Callum held his breath, listening, but all he heard now was the throb of blood in his ears. Silence settled in the wardrobe like smoke.

He should just give up and go downstairs. Who cared about this stupid game? He would just say he had thought the whole thing must be over; that the rest of them had given up. That had to be true, anyway – he had been up here for ages. He would reveal where he’d hidden, enjoy their awed looks, and tease them for not having the guts to join him. Back among the bright, balloon-decked rooms downstairs, he could forget how lonely and adrift the attic felt, cut off by silence from the rest of the house. He wouldn’t have to keep ignoring the way the air seemed to dim around him, like an eye closing.

It was just the light changing, of course. Teatime was in its way, and the day had been grey and flat to begin with. The clouds he’d seen gathering along the horizon this morning were now probably crawling across the pale sun, diluting it even further.

Something chattered nearby, like rattling sticks: loose glass in the casement, Callum guessed. He listened for the first hard taps of rain against the window, imagining the sensation of fat, cold droplets striking his arms. He felt suddenly parched.

‘Sod this,’ he said to himself, and started to unfold his legs, his mind on cold lemonade and chocolate cake.

Then he froze: a voice was talking somewhere. On the floor below, he guessed. Was it Ben? He thought so, but it was hard to tell. Whoever it was spoke so quietly, their voice blurred into a low, shapeless murmur. Were there two of them?

Callum sat forward, straining his ears and squinting at the pale strip of light that marked the open door. In the faltering sunlight, the shapes in the room became as soft and indistinct as the mutterings below. Shadows stole across the floor.

Whoever had been speaking, they had stopped now. He could hear a thin breeze whispering somewhere.

Timber creaked. Callum held his breath. At last, someone was braving the bare wooden stairs to the attic.

He settled gingerly back into the wardrobe, doing his best not to make a sound. The attic doorway was still just visible in the dimness: a narrow slab of deep shadow.

The stairs groaned again. Callum stared harder at the pale vertical strip marking the edge of the wardrobe door – so hard the fragile light seemed to crumble like ash into the darkness.

And then it was gone.

It took Callum a moment to register what must have happened: it was a trick. Someone had slipped into the room and shut him in. He bit back a cry, sudden panic fluttering in his chest, and felt the stab of tears in his eyes. In the suddenly total dark, the space inside the wardrobe seemed to erupt silently outward, becoming so vast and vertiginous Callum grasped for purchase at the wood around him. Dim spores swam and bloomed in his vision.

All he had to do was open the door. He could push it with a toe. He drove one foot forward.

Where was the door?

Something fluttered at the edge of his vision, frail and translucent. Fleetingly, he wondered if he had missed some pale garment hanging in the wardrobe – but what breeze could be driving it towards him? His chest was bursting. If he let himself cry he might never stop. He shoved his foot further forward – where was the door?

Callum tried to shout at whoever had shut him in, but all that emerged was a starved whisper.

Timber shifted and groaned. Something like a hand, heavy and soft as wax, closed over his face, and a low, hollow voice spoke in his ear: