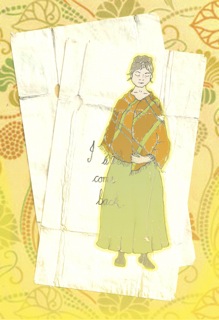 I have watched the machines come closer each month watched the great chimneys topple, the slate roofs slide, and then crash to the ground. I have seen the dust clear

and reveal what remains of a demolished house after the machines have gone. They are one street away from this house. I am afeared. I am attached to this house, to these rooms and I may not leave until Martin returns. He could not return to a pile of dust. How would he find me if he cannot see the stone steps or the great green door that shut behind him the day he left? His promise and mine ring in my ears yet.

I try not to be angry, but how could I know how long it would be? How could I know my own promise would bind me to this house beyond life itself? I remember the illness. The fever. The iron band round my head, the red roaring pain in my joints, and the slow fading to almost nothing. The children weeping then leaving my bedside downcast. Then the rise of my words in my ears, whispering at first, becoming louder as my still body flowed into a new shell, transparent and weightless.

Watching them from my window take my dead flesh, pray over it, box it and carry it through the great green door to a cart, my children following my sister and brother to wherever they took me. I have been here since, waiting, knowing his vow will bind him as mine binds me to this house, which is condemned. But I must not be angry.

I have stopped counting the hours and days, the years and decades even, but only spend my time in moving through the rooms that knew such happiness, such great love. I watch by the window that overlooks the street. I take very little interest in the people who pass through here. They have changed the door knobs, painted the doors – they have been seven different colours in the time I have been waiting. The house is so strong, so well-built, they have not needed to mend much of it though from time to time the sash cords rot and the windows crash down. There is no longer gas light here but shining silent globes and they have brought wires into the house for their talking machine. This is strange. In my transparency they have not sensed my presence but I have noticed lately that when this particular family use the talking machine, which they call ‘phone’, seems to be listening to my thoughts and sometimes tries to say them out loud. This makes them shake the phone and complain about something called BT.

So I have taken a closer interest in this family, a mother and two children, not unlike my own. The mother has many worries and work that tires her. She cares for homeless     people. She sometimes works through the night, sometimes has to leave the house urgently and I have wanted to convey to her that I will keep a motherly eye over her children while she is gone, but I do not know how to communicate with her, though I can sometimes overhear her dreaming. The other thing she worries about is having to leave this condemned house without knowing where they will go. That worry we share. She talks to the girl about her work and I listen by the door. It seems work full of danger and ill-use. The mother is sometimes close to weeping and the daughter makes her tea and comforts her. I have started to watch for them reaching for the phone, and thinking hard, standing close to them. The machine crackles in response and almost speaks my words. Just once the daughter seemed to hear something.

‘Did you hear that?’ she asked her mother. ‘The phone. I just dialled but before it

connected, it said something like ‘I will wait.’ A bit scratchy, you know the noise it makes,

but it was clear enough.’

‘Can’t have been connected. Crossed line? Used to get them a lot in the old days. Whatever it is I wish they’d sort it.’ her mother had replied. ‘Perhaps it’s those bloody excavators  interfering with the lines. The house is full of dust.’

It was the daily progress of the machines, the raising of great dust clouds and the crash of bricks that gave new urgency to my desire to speak to them. I could see the battered front doors lying on top of the rubble. I see our great green door lying there too. The first of the machines was parked at the top of the street, a great yellow hook-nosed monster with crushing jaws. It could only be days away before it began its advance. I have to keep my anger and fear at bay.

That afternoon I saw the mother was excited. She had been using the phone and saying ‘Yes’ a great many times. When the daughter came home she flew to her and hugged her tightly. A new job, a better job, best of all a house and they could move straight away. Leave the tiring job, leave the condemned house. I shivered – that would leave me in the rubble. I walked back and forwards in great agitation in the hallway, wondering if I was to be bound forever not the house but to a wasteland that Martin would never recognise. What to do? What to do? My dilemma was pounding in my head. I looked up and saw her staring at me open-mouthed, the phone in her hand. She seemed to be seeing something outside her natural vision. I thought as hard as I could, focussed my will on the phone.

She did. I came to her in her dream and she saw me. She tossed and turned, cried out, trying to throw me off. I thought to make her understand I meant her no harm, but the strength of my feeling seemed to frighten her. Her cries brought the daughter to her side and then she woke, and I lost her. Her daughter stroked her head until she drifted back to exhausted, dreamless sleep where I could not reach her. That night anyway. I swallowed my frustration even as I watched the yellow machines advance, felt a juddering in the very walls and I knew it was only days now.

But though I tried every time she slept, she pushed me away. I needed to make her see my predicament before they took the house down and left me homeless. Through the following days I watched them pack their precious things into boxes. I made the phone crackle so much in the end the daughter took the wire from the wall and when it fell silent, so did I. With no-one to listen I took to destruction, smashing small things, fraying the sash cords so the windows crashed down, blowing the light bulbs with my fury. ‘We must have a poltergeist,’ the daughter laughed. ‘Just as well the house is coming down.’ So they left and the house came down.

I felt the strength of my vow, the love it had fed upon, turn sour in my breast. I watched the walls of our family home implode all round me as a great metal ball swung like a monstrous conker at them. I saw shreds of the cornflower wall paper from the bedroom that Martin and I shared when first we loved. I saw the shattered floorboards, the broken glass, the worn rug from the children’s room that no-one had bothered to replace, all in a tangled heap.  At last, I raged.

This is my permanent bitter state now. With no hope of Martin returning I pace a circle of debris with the great green door at its centre. It lies on the heaps of rubble and it is where I sit through the endless hours waiting for children to come and play. It is where I place floorboards with nails uppermost, or shards of old glass, or twists of washing line between uprights. It seems so very long since I loved a child – the memory is a wisp of feeling brushed aside by a growing hatred – so since I must be here I invent ways to pass the time. In time the authorities will sweep all this away and construct new buildings. By then I will be well practised in expressing malice.  I will inhabit their new building and I will wreak havoc there until I understand why the curse of undying was laid upon me. Martin will never come, and I will make lives hell such as mine until my end.