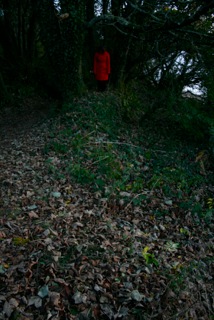 “You are my property. I own you and all your sordid thoughts. I travel in dimensions and densities that your feeble half-brains could not understand. I move in planes that touch everything, everywhere and at all times. I slip with ease between time and timelessness. You have stumbled into my domain and become my prey”.

I tried not to think what unseen but ghastly vocal entity I had summoned into being but too late, a wet finger tingling at my shoulder betrayed the fact that my thoughts were not wholly my own. Words were dangerous and, as I tried hard not to think of anything, I succumbed to a fatal weakness of mind. In terror at my own folly, I saw a catalogue of past moments moving at incredible speed into a blur of events that were best unremembered. All my petty crimes of hurt towards spurned lovers were laid bare and I was seeking forgiveness for exposing even my unkindly feelings towards others, however trivial. It looked into my soul and saw I was wanting as a person fit for adaptation when the veneer of bodily attachment was spent.

I snapped back into my dense, alcohol befuddled reality with a shudder and took a breath. Why on God’s earth had she persuaded me to go to the crypt of a deconsecrated church to drink strong wine and why had we possibly imagined that St James’s Park at night would be a good place to make love. What had we been thinking? My attempt at rational thought ceased as abruptly as it had started. I turned in the direction of the finger on my shoulder and tried to fuzzily comprehend the misty, headless figurine shimmering before me. Was this wet, bleeding spectre in a red striped dress, standing with pleading arms outstretched, a vision of the torments of Hell? It was as ‘real’ as my mind could conjure from thoughts that I did not know I had.

“See, I own your thoughts…and your bodily functions. I can cause you fear, pleasure or calm and I can blot all your imagined memories or treasured thoughts with a sigh. I can give you visions of cruelly murdered bodies, slashed and bleeding just as ‘real’ as the day I had them despatched. You now only exist in a ‘reality’ that has been conjured by me. You are a demented butterfly fluttering at the attic window of another world.”

As I stared at the waterlogged apparition my incomprehension and fear subsided into a gentle sleepiness of warm, comforting, softness. This lasted a few soothing nano-seconds before the adrenaline-rich anguish of terror and a hammering heartbeat signalled that I was again merely a demon’s plaything. With another spasm I involuntarily cried out and saw my once but nevermore lover run and scream, but soundlessly, fleeing the bushes, the park and my life.

“You brought me here my sick friend. Your drunken depravity excited me into existence on this plane, at this density, in this moment, at this point. As so many times in the past this place was always seething with those attracted by the unseen scent of corporeal corruption and so-called earthly pleasures. Once summoned of course this genii does not easily go back into the bottle. Naturally, as you have now surmised I could snap your limbs, core your rectum, burn your flesh, extract your eyeballs or exsanguinate your pathetic blood and drink it in goblets if I so wished. But I am bored with these practices of mere magicians. I feel that you could offer more interesting sport. So, the question is, are you prepared for supplication before me at this place in this time?”

I was trapped in a mental cage with the perfect torturer. I tried desperately to think what I had done to get to this place, this time and the precise coordinate of the twain but what the hell was this nexus. This was St James’s Park in central London for goodness sake, dressed in night in the middle of a brightly lit, bustling city although in truth I could hear no sound at all nor smell the air. Was there something here, in this unreal bubble that was important; that would explain what I had done to excite this monster? We both wanted that knowledge but what was it? The very act of thinking hurt but perhaps this was because there were two of us in my mind trying to mine this precious quantum of essential consciousness. I just could not remember anything useful as if my memories of ‘here’ were being stymied by abnormal manipulation. I gave up.

“But to business; you’ll probably want to know why I have invaded your mind and dangled the vision of this unfortunate decapitated woman in front of you. I was her incubus. I owned her then and I own her remains now and forever. She was the pretty wife of a soldier in the Coldstream Guards, once barracked near this place in the time you call the late eighteenth century but took to fornication with others, naturally with excessive lust, at my behest. I feed off their perverted energy you see but I wanted more. So, I had her cuckolded husband drag her into these bushes in a murderous. He buried her head here and threw her body into the canal that once took the blood of Tyburn’s gallows to the fetid tides of the Thames. These mortals were my playthings as were your King Charles and his many mistresses who cavorted in this place and the prostitutes and their clients who followed. I pushed their minds to excesses and fed from their perverted bodily desires, fears and pleasures.”

“I am a dark energy, a time-travelling, shape-shifting trickster. Whatever you think, I will become. In your night terrors you will writhe like a fly stuck in a web that occupies all of your past, your present and your future. I might suck the blood from you and leave you as a husk for someone else to clear up. Tonight, however, I am made ghostly as the ‘Red Lady of St James’s Park’. You are not the first to be my witness as I play my pranks and sieve the rich broth of fear from the minds of innocents.

I fumbled for a mental map out of this place and also for a weapon but Holy water and silver bullets were absent. I looked downwards. Was this exactly where the poor woman’s severed head was buried? Was this the precise point? Maybe this was the reason for our assignation here: as above, so below? Perhaps it was a portal that required a key?

It read my thoughts…

“You are correct!  You are that key. That is the point! I want to feel your spirit attempting to leave your body like a fat bird trapped in a small suffocating box slowly filling with noxious gases. I will be replenished by the energy of your trammelled soul. I want you to die here of tormented fear and I want to watch.”

Expectant of some unutterable terror but knowing not how to prepare I took a deepened breath that quite possibly might be my last ever on this solid Earthly plane.

Then I felt an electric surge within me and heard another, strong, deeper, voice that was definitely not mine. In the same telepathic conversational tone I felt my mind register a sense of relief that escape from this curious nightmare might even be possible. I made an involuntary gasp as I exhaled and heard this otherly voice exclaim in calm but affirmative words.

“Every force has an opposite and I am yours, Devil”, it paused…

“Step outside now human and leave this place of entrapment. I have a bad entity to nail; right here, right now. Be pleased that your addled mind will remember little detail of this encounter with evil but take care and be thankful that this was not your time or place”.