Words and artwork by Roisin Clarke 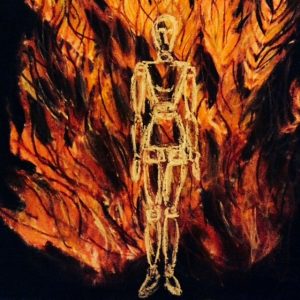 I see Susie’s playing with that doll again. Hang on, my mistake – mannequin. An old drawing mannequin, from before my time. Thought Kat had torched it before the move, with the rest of all that old stuff from before. Grimacing slightly, I pick at a hitched loop on the arm of our sofa. This is supposed to be a fresh start; a new dawn.

Susie burbles gibberish to her new friend, clicking its limbs this way and that into a stiff, upright position and perching it on the edge of the armchair. Perhaps I should take it off her; at four, she’s probably still too young to be messing around with all the choking hazard hinges and balled joints keeping that thing together. But it’s keeping her quiet, and that’s what I need. I’ll just keep a close eye on her instead. It’ll be alright.

They say moving house is up there with bereavement and divorce, in terms of the stress it puts you through. We’d certainly found that to be the case, although it wasn’t really the move itself that was hard. More everything that came before it. Finding the right place, this place, no.42 – was pretty straightforward. No. It was the stuff surrounding it that sent my anxiety flaring like flames up a petrol trail.

Unfortunate analogy perhaps, but never mind. It took two long years to get that money after the fire. The insurance company wouldn’t pay out because they said John – the ‘bastard artist’, as I like to call him – torched the place himself. It had been tough on us both, to say the least. Things had gotten pretty… fraught.

“Sometimes I wonder why you stay”, she’d whispered one night, cowering between the back door and the kitchen cabinet. Stiff and sore-looking, not unlike Susie’s doll – mannequin, sorry. Ditto, I’d thought as I’d crouched beside her, jeans pulled tightly across my knees as the tight-lipped smile on my face. Muffled apologies and a promise into her thick, auburn hair that it wouldn’t happen again. Let’s start afresh, we agreed. So we burned the rest of the stuff. It was meant to be a ceremonial release… an unburdening. That’s what we agreed.

“Pee, pee – pee-kahhn…” My eyes flick open and upwards at the hitch in Susie’s speech. She’s dancing the mannequin across the olive-green corduroy now, a stray blonde curl slipping across her right eye. She has his eyes. The mannequin’s splayed on the floor, now. Is that a scorch mark on its back, or a smudge of dirt? I don’t like it. Don’t want it here.

“What’s she doing with that?” We pretty much read each other’s minds at times, Kat and I. Hip against jamb, dirtied dishcloth balled in her left fist, oven grease smeared across her right cheekbone. She’s been sorting the kitchen whilst I watch Susie, then I’m taking on the bathroom.

“No idea. Must’ve salvaged it from the bonfire. Susie –” I drop my voice a notch and lean towards her. “That’s dirty. Pass it to Daddy so’s we can put it in the bin.”

“NO!” Susie snatches up the wretched thing and skitters round the side of the chair. “It’s Pee-kahhn. I want him to stay.” Kat and I exchange glances; don’t push it. I reach up for Kat’s hand. She grips mine a moment, a loose assent before retreating into the hallway.

“How weird that she calls that thing ‘Pecan’”, I hear her mutter as she crosses the kitchen threshold.  “That was John’s nickname.”

“I called him that because he was so hard to crack. Then, when he finally did, I wished he hadn’t.” That thickness in Kat’s voice again; I can’t tell if she’s about to cry, drop off, or both.

It’s been years – I’m sick and tired of this, I think as I curl away from her in the darkness. Why can’t we just leave him behind? Why can’t she just focus on the here, now, us?

“I know you’ll think I’m mad…” A pause unfurls over several minutes, it seems. Then a sharp shift, a snap of tension in the air as I feel her twist to face me. “… I could’ve sworn I saw him earlier.”

What? The man’s long gone. What’s she on about?

“When I was cleaning the sink … I could’ve sworn I saw someone in the garden. It was dark by then. But I’m pretty sure it was him.” Kat’s voice is even, low, calm. I don’t get it. My chest-knot tightens again. “I can’t… Of course it wasn’t him. You’re seeing things. There’s no one around for miles -”

“I know it doesn’t make sense. I just… Then, straight afterwards, I saw Susie was playing with his old mannequin. I thought – maybe he wants something. Maybe he thought we were mocking him in some way. The night we burned the rest of the stuff.”

What?! My brain can’t process this. The woman’s mad. She’s lying there, totally unfazed, telling me the bastard artist – a dead bastard artist, no less – what, wants his toy back? I ball my fists beneath the duvet.

“It’s hard to explain. I don’t think he’ll – ” I’m up and across the room before I can hear what she says next. Fine – I’ll get rid of the mannequin. It was freaking me out anyway. I’ll deal with her later.

It’s only when I reach the landing that I smell burning.

The alarm didn’t go off. Why didn’t it go off? I swore I’d put the battery in yesterday. One of the first things I did.

I’d managed to put the fire out quickly. Must’ve been something stuck at the back of the oven that sparked when we cooked dinner earlier. Clearly Kat didn’t clean it properly; probably because she was busy hallucinating dead men in the garden. At least she’s gone back upstairs to check on Susie now. Out of the way.

I peer at my hands and forearms, covered in oven-grime and shaking slightly. Weird, weird day. Maybe I can scrub the strangeness off with the soot. Better make the water hot as I can, get properly clean.

I assess my reflection in the glass, careful not to make direct eye contact. Then I look beyond, into an expanse of gloom. It’s so dark out there. How could she have seen a thing?

“Tim!” I flick my head towards Kat’s call, then back to the window. Got to deal with the dirt first, then her. I roll my hands one over the other, one over the other. The water’s not nearly hot enough; I break the cycle to turn the cold tap off. That old, familiar knot pushes against my chest. Don’t clench.

“TIM!” More urgent, now. The distraction makes me forget what number I’d got to, and now I’m going to have to start again. For God’s sake.

“He’s back.” She slips across the lino in thick socks, skittering too close. I’m going to have to start again. My hands feel raw and prickly, skinned and bloated. I clench the front of the sink to stop myself from shaking her. I can’t go there. She’ll leave me if I do.

“No, please, Tim. Please… Listen to me..” She clutches at my right elbow, yanks my forearm up and out of the water. I reel around and get a grip on her wrist, pull it down hard. For a moment it feels like we’re doing some stupid dance. Yank her towards the hallway. Get out of here.

“I said – DON’T. START!” I can feel her resisting me, trying to push back into the kitchen, but I’m not having it. “Just go. Get back upstairs and stay with Susie.”

With that, she stops still. Rigid, stiff, like that bloody mannequin. I sense her staring at something behind me. I look up, my hand still clenching her wrist, my hip jammed up against hers. Something moves into my peripheral vision. I turn, slowly, towards the back door to see the patio light flick on.

“She’s not there, Tim.” Kat whispers.

I can smell burning again.