Words and artwork by Tony Clarke 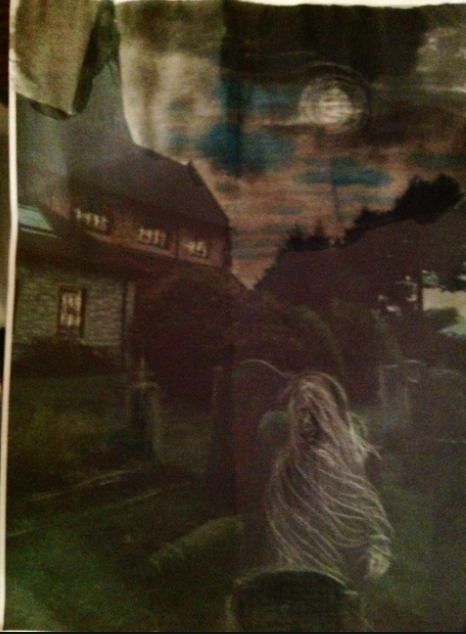 It’s not bad weather. For October. For Scotland. Just mizzle-damp. Not busking weather, though. That poor wee girl singing at the entrance to the pedestrian underpass must be chilled right through. Couples stroll past, too absorbed in each other to acknowledge her efforts. I feel obliged to. There but for the grace of God and all that. She’s singing a cappella; a fragile keening, all the more beguiling for her accent. I give her a smile of encouragement, wiggle my instrument case in a gesture of solidarity and drop a couple of pound coins into the empty beret at her feet. Her brown eyes meet mine and she stops singing. ‘Just a rehearsal’, she mutters, before continuing. I wonder what she means but don’t want to interrupt her and walk on. The tune has now wormed its way into my head. Ewan MacColl, I’m pretty sure, but the title evades me. It’ll nag at me for ages now. I contemplate returning to ask her but she’s already gone when I look back.

I like to get to venues early to practise. Probably just as well this evening, what with Graham giving me the silent treatment – the sulks, the head-shaking, the full works – after my little prang in his – sorry, ‘our’ – new car. Not even so much as a ‘goodbye’ or ‘see you later’ when I left the house.

I walk on towards the palace chapel, St.Thomas’s. I doubt many of tonight’s special guests have graced its pews too often before. Certainly not local boy made good Alex Wallace; he’s not the sort to feel the need to confess his sins. One of which is undoubtedly his attempt to build another of his budget hotels here, right on the edge of the palace grounds. The Stuarts must be turning in their graves at the prospect. And God alone knows what the ‘Braveheart’ namesake he laughingly claims direct descendancy from would make of it.

He’s a divisive figure. There are those who find it expedient to buy into his ‘jobs for locals’ spiel and those who know only too well that his ‘McMotel’ franchise is built on the back of an exploited, mostly immigrant, labour force and, moreover, that his treatment of the young female contingent gives a whole new meaning to the term ‘performance-related pay’. Few believe his publicly-expressed incomprehension as to what could have driven the young cleaner found sprawled recently, a sad Marilyn Monroe parody, complete with empty pill bottle, on the bed in one of his tasteless tartan rooms, to end it all. Fewer still would dare say so publicly, such is the reputation of his attack-dog lawyers.

The sight of the chapel and the palace beyond – bold, ancient, implacable against the grey sky – ejects him from my mind. I push open the old wooden gate to the chapel grounds and, almost without thinking, find myself in amongst the scattering of headstones to the left of the path. What tales could those interred beneath these green-algae-spattered slabs, their inscriptions worn by centuries of Scottish weather, tell? I rest my hand on one, close my eyes. It feels cold but smoother to the touch than I imagined, strangely comforting. I feel connected to the past and clutch my viol to my breast; it seems appropriate to be playing such an instrument here.

‘She walks in the cold dark hour before the morning.’ That song again. Has she followed me? I whirl around, scan the headstones, now beginning to merge into the dusk. I hear footsteps, slithering through wet leaves. I try a tentative ‘Hello.’ No response. I see no-one. Just the flickering shadows cast by the gently swaying trees.

It suddenly seems much darker now and the light spilling from the chapel windows more welcoming than ever. I slalom hurriedly between the graves, back towards the path. I stop when I reach it, turn my head, ears straining. Hear nothing but the breeze and the patter of rain. I turn again, stumble, almost falling to my knees as I struggle to hold onto my precious viol. ‘The hour when wounded night begins to bleed.’ There’s no mistaking that voice this time. And, this time I can see her, a silhouette darting past the glowing windows along the chapel’s east wall; now you see her, now you don’t. Now you don’t.

I scamper to the chapel door, fumble the heavy iron latch and am relieved when it opens easily and I am suffused with soft, warm light. It’s just as Father Michael said it would be. The stained-glass image of St.Thomas gazes beatifically over the candle-lit area in front of the altar that is to be our stage tonight. As I take out my sheet music, I notice that my hands are shaking. I breathe deeply, calm down. I take my viol out of its case, savouring its shape, its polished wood, its smell, its sound. Graham is a genius; you’d swear these reproductions of his were originals. I’ll tell him that again later; get back in his good books. I turn the pegs till each string is in tune, pick up my bow and, closing my eyes, start to play.

My immersion in the music is total. Time is of nothing. When I open my eyes again I see that Graham and the others have slipped in and are now positioning themselves around me and tuning their own viols in quiet concentration. It’s a rule we have that we don’t disturb one another when we are ‘in the moment’; the small-talk can wait until later.

People are now drifting in, ordinary members of the public filling the pews from the back forwards, special guests claiming the front two rows. Predictably, the dishonourableAlex Wallace awards himself prime position, centre of the front row, beaming and nodding like a cross between a Cheshire cat and one of those toy dogs once ubiquitous in the backs of certain cars.

The chapel fills rapidly, and there’s an almost audible air of expectation. Father Michael enters ‘stage-left’ and makes a point of coming over to speak to Graham at some length. He doesn’t speak to me but I can see he’s pushed for time as our MP and the Mayor are now with him, about to address the audience. Both seem less concerned with our music than with ensuring that they mention a certain businessman’s generous sponsorship of this event.

Father Michael, however, does us proud. He is surprisingly well-informed, detailing our revival of the Renaissance-period viol, painstakingly explaining how it differs from the violin and the viola and enthusing about how its unique sound is ‘admirably suited to the playing of Bach in this beautiful setting.’ Disconcertingly, he singles me out for special mention, and, even more oddly, Graham thanks him for doing so. If our fellow violists are upset by this faux pas they don’t show it.

Sometimes – call it synchronicity or whatever – things just come together so well that it seems magical. Dare I say it, almost spiritual. Tonight is one such night. When the last note fades, a brief hush prefaces an explosion of applause and cheering. There are calls for ‘more.’

As the applause finally dies, I await a cue for an encore piece but none comes. Without thinking, I draw my bow once more across the strings of my viol, and a tune comes to me. Not Bach this time. Instead, the folk song that’s been nagging at me all day: Ewan MacColl’s paean to his mother, and all the other foot-soldiers in that great army of cleaners who toil unnoticed, unthanked, underpaid, in the cold, dark hours, the world over. Fingers and bow set free the beautiful melody. And then I see my young subway singer again, making her way, diffidently at first, then with growing confidence, up the aisle from the back of the chapel. She is singing, and this time her voice is soaring, as she comes to join me on the stage. I am pleased to see that Wallace is now staring, unsmiling, red-faced and open-mouthed, at us and we lock our eyes on his when we get to the last two lines, just so he knows for sure that they’re for him: ‘When did we cease to look and see her? How is it no-one knew she was there?’

The romantic in me perhaps expected wild applause. Maybe even a public denouncement of this odious man; the Hollywood, if not quite Holyrood, ending. But the audience members are just talking amongst themselves. I feel embarrassed. And alone. The young woman has left, without even telling me her name, and the rest of our ensemble are ignoring me. I look to Graham for some comfort but he looks in need of some himself. He seems almost tearful, and a number of people are coming up to him and making a point of shaking his hand.

I need some air. I make a quick exit through the side door and walk towards the gate. I’m not sure where I’m going, or why, but keep walking, down to the underpass, right through to the far end. I stop, lean against the wall, slide down and sit, chin on knees, trying to clear my head. I stare at the damp floor, and at the two pound coins lying there.