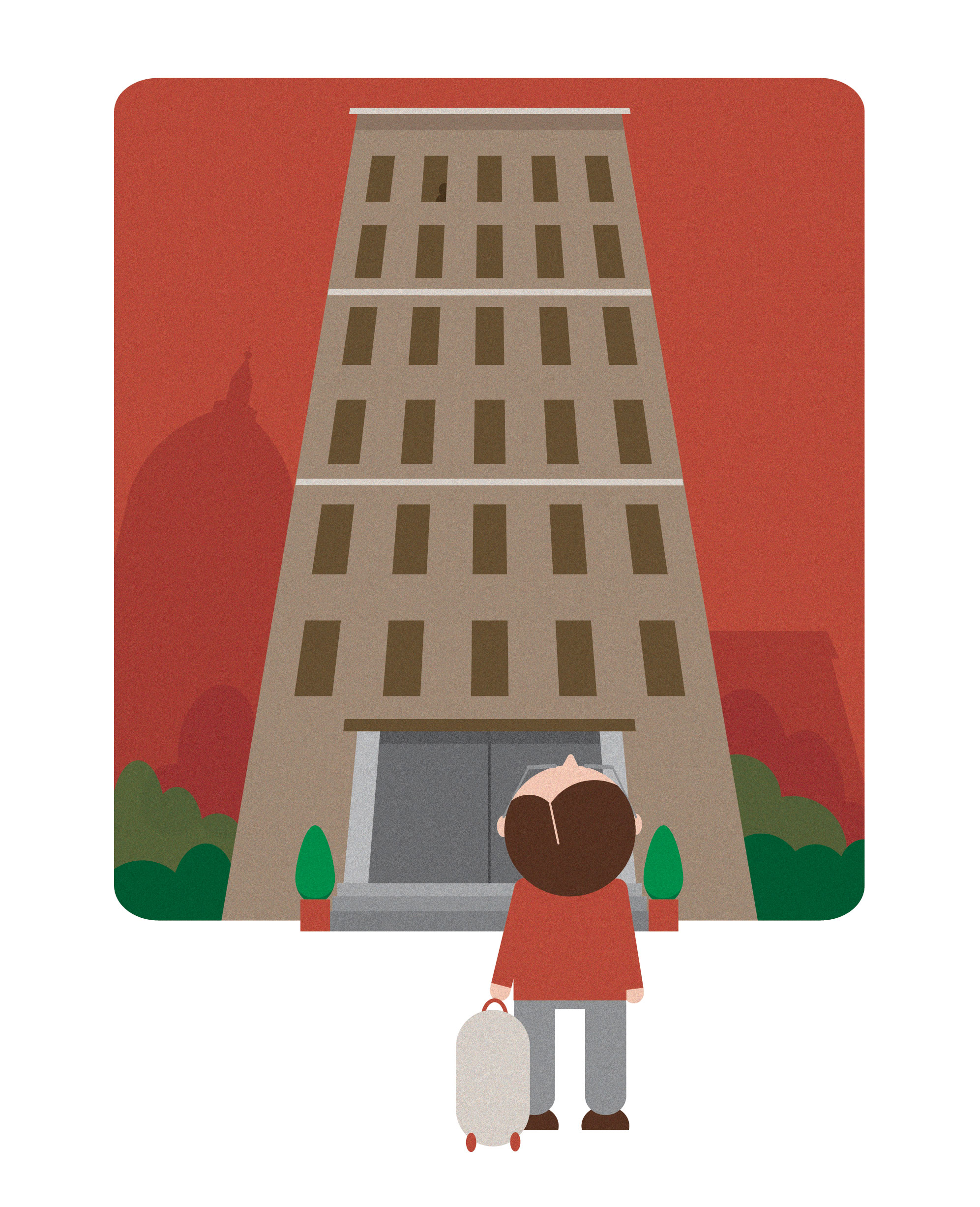 He was going to be fired. There was no doubt about it now in Charlie’s mind. Five meagre months into the job, this was to be his first and last business trip as junior menswear buyer for Juju & Mace.

It wasn’t his fault, he protested to himself as sweat dripped down his back on the tourist packed train. If only his flight hadn’t been redirected. All being well, Charlie would have been in Florence, at what the promotional site breathlessly described as “the most stylish trade show on earth.” But sadly for him, and his future employment prospects, he was too late to even make an appearance.

Finally Charlie reached his hotel. Slowly, dejectedly, he made his way up the stone stairs, through the lobby and into a sparsely lit reception.

“Yes?” enquired a man in his late forties, appearing from the dark of the staff quarters behind the desk. His name badge drooped towards the ground, as if feeling downtrodden by the enforced familiarity. Charlie could just about make out the name, Rodolfo.

“I have a reservation for two nights,” replied Charlie. His oval glasses slipped down his nose as he spoke.

While Rodolfo searched for the details, Charlie looked around. It seemed much like any other corporate hotel he’d encountered in central Europe. Marbled floors, tick. Inoffensive, vaguely abstract artwork, tick.

“One of the girls will bring it back to you shortly,” he said, passing Charlie the hotel key card. “Room 154, 6th floor, halfway down the… corridor on your right.” Rodolfo’s voice trailed off. Caught in thought. Without speaking he retreated back into the darkness.

Before leaving for Florence, Charlie had overheard tales of luxury apartments and exclusive hotel pool parties. Perhaps someone else had already booked them this year. Or maybe Juju & Mace had experienced a tougher financial time than they let on. Either way, Charlie’s lodgings fell some way short of what he had envisaged. Stain-resistant seating fought with beige accessories in a battle of the bland. Neither won. The only real character came from an incongruously large old mahogany wardrobe that stood in the far corner of the room.

Charlie dropped his travel bag on the carpet and headed over to the window. Opening the heavy beige drapes, he looked outside. High above the old stones of Florence, the sky had begun its daily transformation from clear blue to blazing orange.

He stood there for a long time, hypnotised by the slowly moving clouds. They were so at odds with the bustling streets below. Inevitably his thoughts gradually drifted back to his job. Or rather, the potential lack of one. Charlie had never really felt like the other buyers trusted him. He had struggled with confidence since he was a nervous teenager. This job had brought those feelings rushing back. Whatever he did, it never quite seemed good enough for them. Now he feared they’d been proven right.

He became aware of movement behind him in the reflection of the window. He turned sharply. No-one was there. As he looked across the room he saw something lying on the carpet. It was just his passport. The chambermaid must have pushed it under the door.

Walking back past the wardrobe to retrieve it, Charlie shuddered. He pulled his sleeves up over his hands. It had been a warm day, but now there was a definite chill. Like a window, left wide open in the depths of winter. Maybe he was becoming unwell. He considered taking a relaxing warm bath. In the end he decided that rest would be the best option. He’d missed the main trade show, but there was still a meeting with a promising young designer in the morning. Charlie was determined to prove his worth then. He slipped into bed and was asleep in moments.

A faint noise in the distance invaded his dreams and tugged at his eyelids until he woke. He sat up. Rubbed his chin, felt the stubble under his fingers. Had a creature found its way into the attic above him? Couldn’t be. The sound wasn’t coming from that direction.

Maybe it was a problem with the heating system? That would certainly explain the draft still coming into the room. Whatever it was, it wasn’t stopping. If anything it seemed to be getting louder. He glanced at the clock on the bedside table. 3.40. Charlie pulled the covers all the way up to his brow in an attempt to block out the sound and waited for morning to arrive.

He woke unrested. His mouth felt dry, his head heavy. Looking at his watch, he saw there were only twenty minutes left to catch the hotel breakfast. Jumping into yesterday’s clothes, he hurried downstairs.

As Charlie reached the dining room, he passed Rodolfo from reception. “I could barely sleep at all last night.” he said, mustering all the conviction he could while still blurry eyed.

“Room 154, yes? I shall have someone collect your belongings. We have a better room for you now Mr Johnston.”

This wasn’t the response Charlie had anticipated. “But, I’m only here for one more day. Really, I don’t need to move. I just want to…”

“As you wish,” Rodolfo interrupted. Before Charlie could respond, he had already scurried away to greet another guest.

Returning to his room after breakfast, Charlie opened the door. Immediately he was struck by a blast of cold air. He shuddered. Perhaps he should have moved after all. He pulled down hard on the bathroom light cord. The fluorescent light flickered several times before settling on its unflinching yellow glare. Heavy bags and a pale complexion stared back at him in the mirror. He began to brush his teeth. Moments later he was distracted by a loud sound coming from outside.

It must have been the chambermaid, thought Charlie. What did they want now? Raising his voice, he told them to come back later. Or better yet, not to bother at all.

Putting on his dressing gown, he stormed out to confront whoever was there. Absolutely no-one. The corridor was deserted in both directions.

The noise continued. It was louder now. More desperate. Its urgency pulsated through the cold air in the room. And now Charlie could tell where it was coming from. He turned back around, suddenly feeling exposed and vulnerable. An intruder? How? The door had been locked. Quietly, he made his way across the room. He began breathing in short shallow bursts, his pulse racing. It appeared to be coming from the wardrobe. Grabbing the ornate metal handle Charlie opened the door sharply, with an urgency he could not explain.

Silence. The knocking, moments before so audible, had stopped immediately. He paused for a second. Caught his breath. He tilted his head around and looked inside the wardrobe. A dank, decaying odour filled his lungs. Then, just for a moment, he thought he caught sight of something; or rather someone. A dark shadow, slumped and turned away in the furthest corner of the wardrobe.

With his ramrod gait and well-practised smile, Charlie certainly looked like he’d regained his composure by the time he arrived at his meeting with the designer. Waiting in the plush office reception, he decided to leave an online review of the hotel. A disparaging one, naturally. First though, he curiously browsed through what others had to say.

“Well located,” three and a half stars.

Must be the owners, Charlie joked to himself. He continued to scroll down. The next review was different. The message simply said “READ THIS” with a link attached.

Soon, Charlie had discovered all there was to know about poor Amina. The troubled background in Senegal. The forged papers used to gain employment at the hotel. The struggles she faced with accommodation. The decision to hide overnight in the large wardrobe of an unoccupied bedroom. The corroded pipe in the water heater below. The open window. The silent, deadly fumes that filled the room. The cold, lifeless body found the following morning. The young family, bereft.

As Charlie read on he could tell his saliva was changing, becoming more viscous. A wave of nausea swept up from the pit of his stomach. As the elegantly attired receptionist began to compulsively tap, tap, tap her manicured fingernails on the desk, a pale Charlie urgently raced down the corridor to the nearest bathroom. He knew that the hotel had changed owners and name since poor Amina’s time there. But, as the staff who still avoid room 154 would no doubt testify, some things cannot be removed that easily.