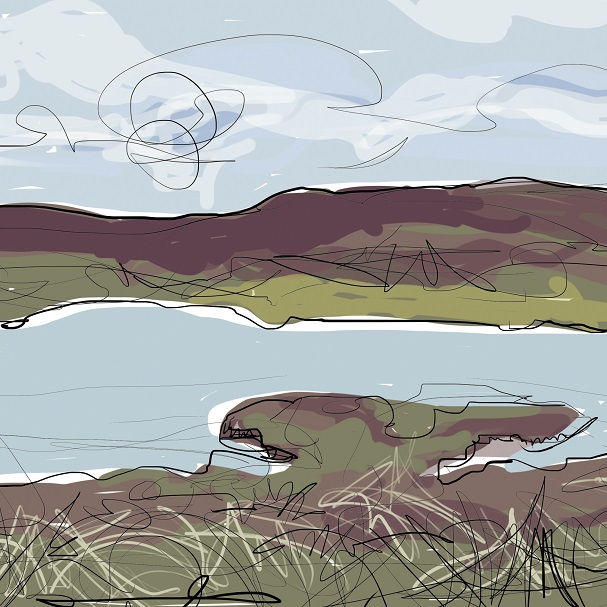 For peat’s sake, really LOOK and see the goodness deep within the earth
Beneath this barren landscape, stand and listen, hear the Pipit’s mirth
At living in this hidden treasure, beyond measure, ancient ground
An unctuous sink that traps the tainted gases so they’ll ne’er be found.

A carbon sponge, expunge or plunge into a sodden peat-filled grave
That sucks it down and drowns in acid, still, with not a single wave
Death, decay, new life, all rife with nature’s gentle thrum, her endless slake
This fecund blanket holds the key, if we would look and SEE, for peat’s sake.

There’s so much crisis talk around nature and biodiversity that it’s hugely encouraging when a positive story is uncovered. It gives me cause for hope that the survival of our planet – with or without humans; doesn’t matter – just might be possible.

I didn’t realise before visiting the Garron Plateau in County Antrim, that it was the most extensive area of intact blanket bog in Northern Ireland. Nor did I expect it to imprint itself so forcibly and indelibly on my mind. Perhaps visiting with the express purpose of seeing, feeling, and learning for this project made me extra mindful. Perhaps it enabled me to soak in the tranquillity of the area and to really look and listen for the wildlife. Whatever it was, I had the feeling of stepping out of one damaged world and into another – one filled with potential and hope. I felt extremely privileged to be among the sphagnum mosses and cotton grass, the orange-tipped butterflies and the pipits and skylarks. There may be limited vertebrate species in blanket bogs, but those that had chosen the Garron plateau as their home were enjoying the rich diversity the landscape has to offer – most of it invisible to my untrained eye.

I felt bad for the times I’ve burned peat, relishing its earthy aroma as a truly special home comfort. Had I known then the consequences, the destruction my seemingly innocent act had wreaked, would I have foregone the pleasure? I hope so. I will in future. Peat belongs where it grows. It achieves more good in situ than it can ever do as a source of warmth.

In my day job, I advise and support companies on sustainability issues, and biodiversity and natural capital are increasingly part of our discussions. Despite my chosen field, I only recently learned that trees rank around 5th in the list of nature-based solutions for sequestering carbon, with peatlands in first or second place. I suppose it’s easier and more accessible to embrace the concept of planting a tree than rewetting a bogland.

Nevertheless, that’s exactly the challenge that NI Water has undertaken in extensively rewetting the Dungonnell catchment at Garron. Its actions since 2013 have helped turn the tide of degradation and restore wildlife habitats, providing a home for hen harriers, merlin, marsh saxifrage and more, and giving me good reason for my optimism. More of this, please. Let’s increase the paltry 14% of peatlands in NI classed as intact and give back to nature. She gives so much in return.

Blanket bog first began to appear in the UK more than 5,000 years ago as the climate got wetter and warmer. Find out more about this fascinating habitat on The Wildlife Trusts’ blanket bog page.