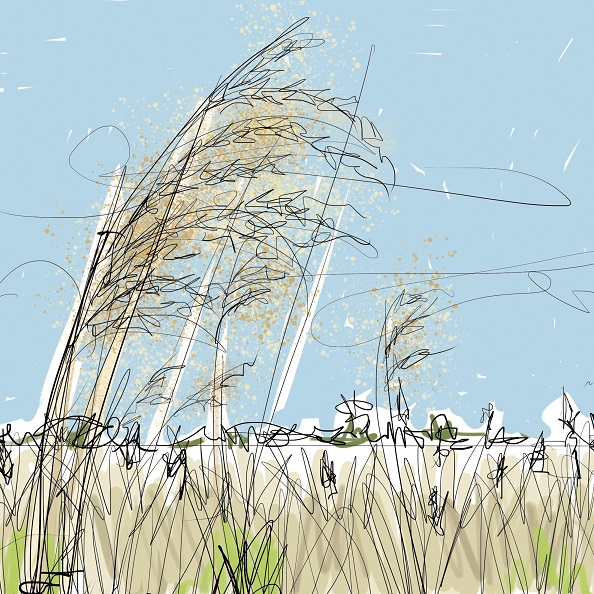 A man drives an iron post into the peat,
Its tip earth-level, its foot thirteen feet deep.
Behind him, a lake shimmers in the heat,
Three miles wide, all eel-slither and beetle-creep.

A breeze lifts, sails fill, windmills creak.
Ditches deepen – the lake shrinks. As pump slurps fen,
Pools become sludge, then dust. The wind in a week
Whips off a century’s peat. That was then.

Now, the post stands where the man once stood,
Thirteen feet tall in a small birch wood.
This island, lapped by flat black fields, survives.
The rest is air through which a man drives.

Wild magic at the Great Fen

The Wildlife Trusts began in the fens. Conservation pioneer Charlie Rothschild bought Woodwalton Fen in 1910, as part of a radical idea to protect certain places exclusively for nature. He made a list of places to protect – and these became the founding sites of the Wildlife Trusts. Rothschild’s hut still stands, on stilts, at Woodwalton Fen, in a pocket of wild space in the middle of what is now the UK’s most productive agricultural land.

We’ve lost 99% of our fenland habitat in the UK. In East Anglia, the fens were extensively drained in the 19th century, exposing the rich peaty soil that now produces 20% of the UK’s food output, and half our agricultural carbon emissions. The land itself has shrunk, and continues to disappear at a rate of 2-3cm every year. The Holme Fen Post is a stark monument to the scale of this loss. William Wells, an engineer in charge of draining this area of the fens, buried it in the peat in 1850. It now stands lamppost-tall.

The Great Fen project has ambitious plans to reverse some of the damage, and everyone I spoke to there was full of hope. The project covers 14 square miles between Peterborough and Huntingdon, with a 50-100 year vision that will transform the whole landscape. “It’s about creating the habitats and watching the species return,” says Henry Stanier, ecologist on the Great Fen, who has seen lapwings raise chicks on the restored land for the first time this year. “Having a big mosaic of grassland, ditches, wet meadows, reedbeds and woodland makes it really work for wildlife.”

It can be good for farming too. Lorna Parker is leading an innovative experiment in paludiculture on the Great Fen, looking at ways to grow profitable crops in wet ground. “We’re not turning farms into rice paddies,” she says. Instead, it is about developing novel crops like bulrush and sphagnum moss that can be profitable and nature-friendly at the same time.

I visited Woodwalton Fen on a warm spring day. Having cycled from Peterborough, past endless miles of flat black fields extending to the horizon, the difference was stark. I stood enveloped by head-high reeds, the air filled with the calls of cuckoos and reed warblers, watching damselflies and dragonflies dart and hover across the rides. In the distance, a bittern boomed – and I began to understand the wild magic of the fens.

Home to everything from orchids and swallowtail butterflies to water voles and harvest mice, lowland fens are an extraordinary, vital wetlands habitat. Find out more about them on The Wildlife Trusts’ lowland fens page.