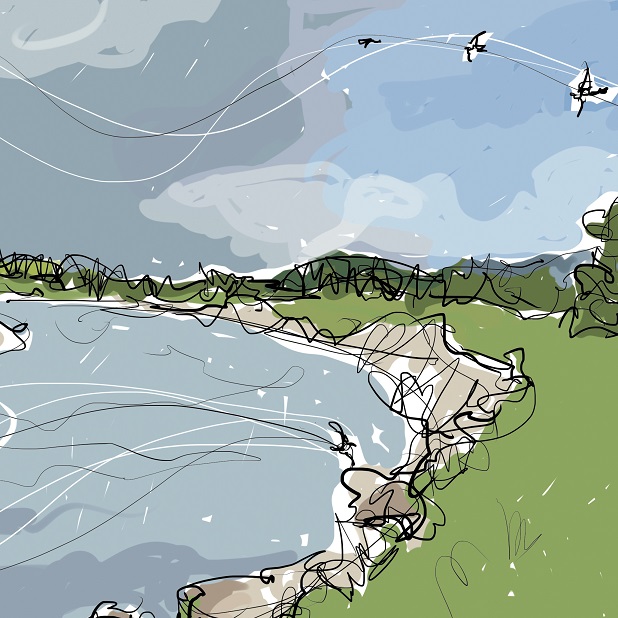 Hear above Tweed, screaming swooping swifts.
Sand martins glide to riverbank nests.
Where are the swallows?

A journey along freshwater habitats

We are the people of the Anthropocene, a poetic and ambiguous word, a geological term, describing an epoch when humans are the driver for change in our environment. In this, our epoch, the boundary between humans and nature is indistinct. Over recent centuries people have been  implicated in the destruction of habitats. Can we flip the Anthropocene narrative to be protectors and improvers of our freshwater habitats?

I met several fascinating people who are doing just this. They are taking action, focused on the river Tweed, ‘the artery giving life to the valley’ as Derek at Tweed Forum calls it. I walked with Derek at Old Melrose, along the oxbow, as I learned from him about the Tweed’s watershed and its 5000 square kilometers of catchment. He explained how the river is a crucial habitat corridor for wildlife: otters, salmon, swifts. They need buffers, he explained, and the river needs them as protection from agri-chemicals. Each buffer from scrub to woodlands to meadows has its role.

Emily and Rachel introduced me to David. They are ‘Connecting Threads’ developing collaborations between communities and artists along the Tweed. David has created meadows at Merlindale. On a misty spring day, with the meadow coming to life, we crouched to touch the small jagged leaves of precious yellow rattle. In his old orchard we saw tangled blackberry bushes, a haven for moths.

Andrew has a life-long interest in moths, birds and insects of the Tweed Valley. Over the last year, he has seen ninety-four species of birds, spotted a rare moth called Chinese Character and mourns the disappearance of the Common Blue. He talks to me of ‘old knowledge’ and how a recent proposal for a housing development will threaten a heronry that has been there for decades.

Nigel has been a gamekeeper on the Boleside beat for four decades. He has seen shifts to improve the habitat, but unfortunately salmon numbers continue their decline. Legislation has changed in recent years to ‘catch and release’ to save the salmon. Nigel enthuses about where I can see kingfishers and watch roe deer feed by the river at dawn.

For the last twenty years I have lived within a stone’s throw of the River Tweed. I’ve taken it for granted and not appreciated how my contribution can make a difference. I am inspired to create a meadow, my small contribution to a river of the Anthropocene.

With thanks to the many people who walked with me along the Tweed and shared their knowledge so freely with me.

‘Rivers of the Anthropocene’ edited by Kelly, Scarpino, Berry, Syvitski and Meybeck, increased my understanding of the challenges our freshwater habitats face.

We may moan about the rain but without it the UK wouldn’t be rich in freshwater rivers, streams and lakes. Find out more on The Wildlife Trusts’ freshwater page.