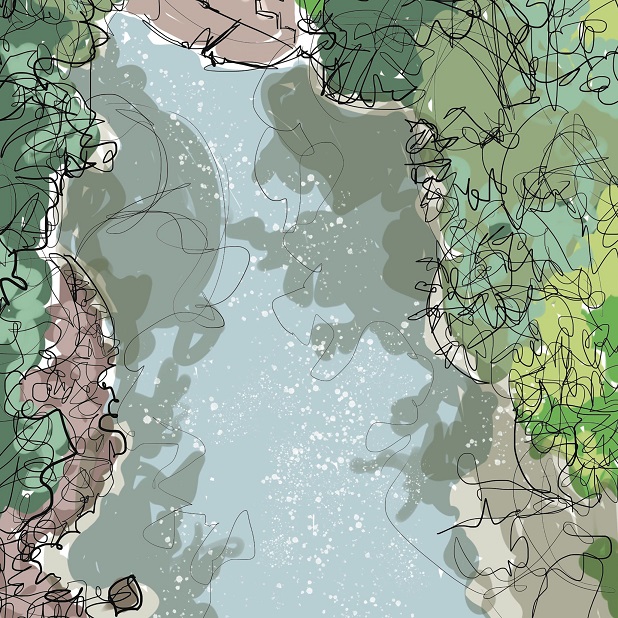 I see you – curved, straight,
loch, locked, burn, bordered, marsh, me-
ander – I see you

3 facts, a poem, a memoir a list and a pledge

(From Her Lines, My Lines
by Joan Lennon, illustrated by Kyla Tomlinson)

But earthed, water realigns,
moulds itself to the old ways,
cleaves to what is round,
to curves and circles
that overlap, combine.

In the town,
confined
along the sharp-edged gutter,
it swirls
makes shapes around lost buttons
and fag ends
disappears down drains
to make Pictish spirals in the dark.

Impelled
towards rivers
that trace the contours of hills,
it swerves over boulders,
strokes the concave sides of fish,
the black boots of fishermen,
the sleekness of otter and vole,
eddies past pier and over weir,
all the way to the curved sea.

Wild swimming is something we’re hearing a lot about lately. When I was growing up, we called it swimming. What an old fart thing to say! But it’s true. I grew up in Ontario. I learned to swim in a lake where you could open your eyes underwater and if you floated long enough, fish would come and nibble your toes, and you would gradually turn blue and pruney. I was always the first one in and the last one out.

I didn’t see an ocean till I was in my twenties. I started with the Pacific. It was pretty impressive – terrifying – seductive. Forty years later, I’m still hooked. An ocean insists on your attention – a river or a loch or a stream extends a more gentle invitation. I don’t take oceans for granted. I need to remember to do the same for water that is fresh.

Let’s
back beavers
Instagram your litter picking haul – as artistic as you like
put wonderful freshwater words into your poetry kit, like
winterbourne
swale
pingo
riffle
upwelling
turlough
fluctuating mere

And that will be my freshwater pledge: from rainfall right through to estuary, to see you – curved or straight, loch, locked, burn, bordered, marsh, or meander – I will see you.