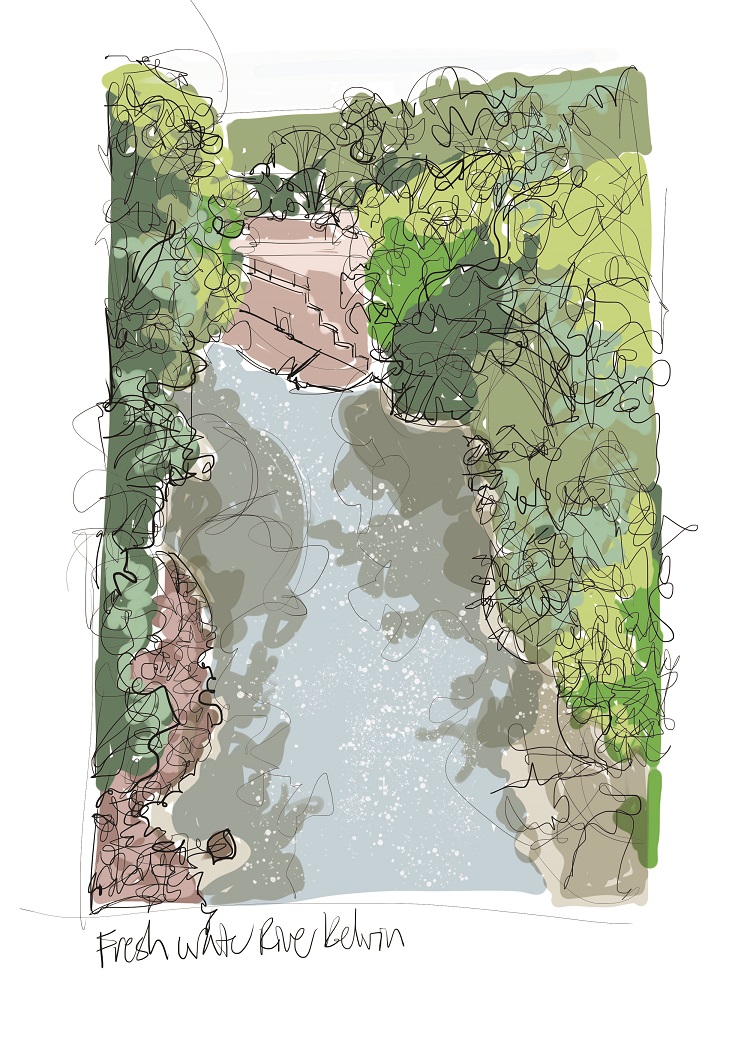 To the Sea – And Back Again

The circularity of the centena constraint makes it a perfect form in which to recollect a river.

Rivers involve air and water, and loop between mountain and sea. A powerful reminder of the interconnected nature of our world; looking at a river we can imagine water as it evaporates from the sea; shapes into clouds; falls as rain; soaks into soil or rock and streams back into rivers which cair once more to the sea.

Cair means, ‘to return to a place where one has been before’ and is one of a gorgeous collection of words gathered in, ‘A Scots Dictionary of Nature’ by Amanda Thomson. Other Scots words I’ve used from this treasury include, swealing (eddying), sletch (riverbed slime), and dead-thraw (‘the last expiring agonies of nature’). I love the visceral sounds of these words and the distinctions they describe. The nature dictionary is an enchantment of weather and landscape, offering ways of perceiving elements of the world around us that might otherwise remain hidden, especially if, like me, you grew up in a city.

Glasgow (‘green hollow’) is a city full of generous nooks for biodiverse plants and animals; from cultivated areas within parks, to wasteland; bogland and riverbanks. I’ve seen the River Kelvin iced over in winter – stalactites lining its bridges; and in spring made flavourful soup from the wild garlic which grows along its banks. The Kelvin is a ‘stalk’ of the larger Clyde estuary which once provided water for shipbuilding, calico and paper production: manufacturing processes which generated polluting wastewater.

In recent years the river has been cleaned of this pollution and brown trout now swim in its water alongside the otters and salmon that my poem notes. Whilst this aspect of the river’s regeneration is exciting, unfortunately new pollutants still fall in the Kelvin: all kinds of other objects including, yes, a Shrek VHS tape (!) and many forms of disposable plastic have been discovered. We know the harm that plastic wreaks in our oceans, but it might not always be so obvious that the plastic that finds its way into the Kelvin is destined for the Firth of Clyde and from there, the Atlantic Ocean.

The pattern formed by the words of my centena is arranged via an additional constraint: increasing and then decreasing numbers of words in each line are organised according to the mathematical growth pattern of the Fibonacci code.

All animal life – humans included – rely on freshwater and rivers are a hugely important source. Find out more on The Wildlife Trusts’ rivers page.