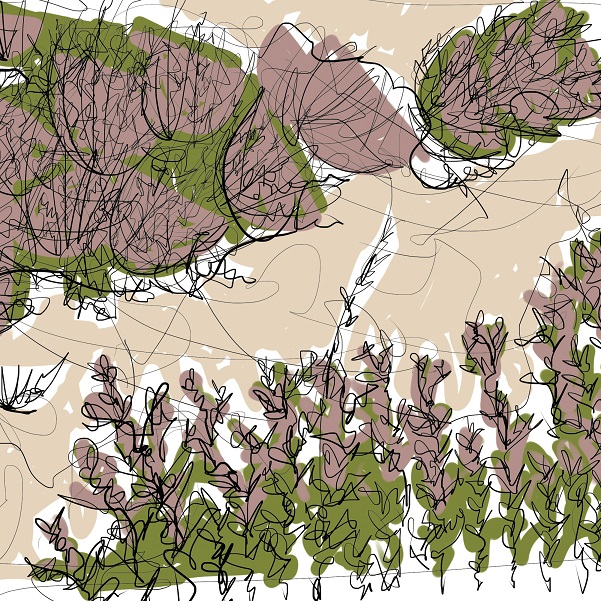 Shared by the commoner and the creature,

Bracken for thatch, furze feed for the drover,

Circle the heath, push the poor to ghettoes.

The last Silver-studded flits from the gorse.

The Dreamer sees the Commons we bequeath –

Balance the books? Rarer than Rainforest.

This is a companion piece to my 26Wild contribution, which celebrated the sand lizard – one of 133 priority species of lowland heaths. I found some on Crooksbury Common, Farnham and I returned this year to discover Crooksbury Hill (managed by Wildlife Trusts). Out of breath at the summit I admired its fine views, birch and soaring pine, and wondered why it was so different from the Common, apart from south-facing clearings of heather.

Heathland isn’t entirely natural but, like much of our countryside, bears the footprint of humans. Several thousand years ago our ancestors discovered agriculture and felled the wildwoods across England. When soils became exhausted – especially sandy, acidic soils – the farmers moved on. Settlers grazed livestock and cut saplings for building, preventing the land from reverting to woodland: heaths resulted. For 200 generations ‘common lands’ like these supported the ‘commoners’ who enjoyed inherited rights of access to land which was ultimately owned by a wealthy institution or lord.

This was to change after around 1700. Enclosure began – land fenced off by the owners, to ‘improve the wasteland’ with plantations and agriculture for capital return. Some 5200 Acts of Parliament authorised enclosure of one-fifth of England – impacting on the land and the poorest it supported.

Crooksbury Hill bore witness. Once heathland, after its enclosure in 1848 it reverted to woodland when rural people were excluded from their age-old foraging and grazing rights.

I love John Clare’s evocative poems of place and people. He lived through enclosure and witnessed the impact, the often violent transformation from a social to a market economy. It surely hastened his declining mental health. Inspired by Clare (the ultimate ecological poet), my piece is in his favoured iambic pentameter.

Destruction of heaths resumed last century – urbanisation, agriculture and tree planting accelerated. Lowland heath is today an internationally endangered habitat found only on Europe’s western edge. We have lost 85% from the UK. We hold 20% of the world’s remaining heathland. Statistically its rarer than rainforest. Conservationists labour tirelessly to maintain and restore what’s left.

Today the talk is of the ‘global commons’ – the shared resources of oceans and atmosphere. While not ‘owned’ they are metaphorically privatised: dumping grounds for waste – the impact left off the economic and ecological balance sheets for too long, leading to the crises we are living through. The final lines of the poem link the local to the global, past to present.

They may look wild, but humans have shaped heathlands for centuries. Find out how on The Wildlife Trusts’ heathland and moorlandhttps://www.wildlifetrusts.org/habitats/heathland-and-moorland.