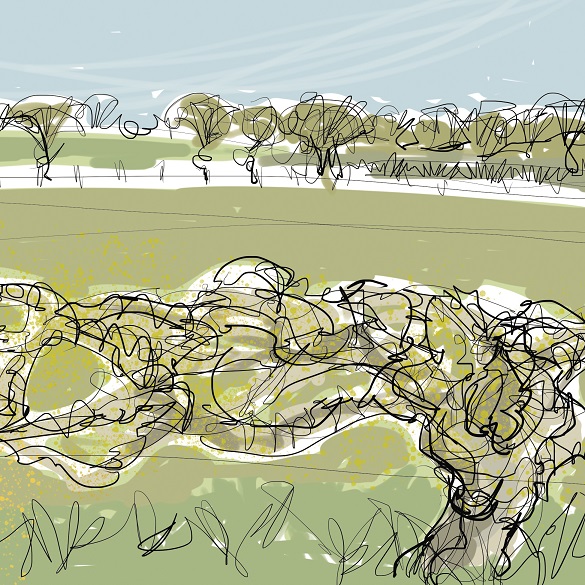 a stitch in time

Well-tended, a hundred metres can sustain

Take the dormouse, weaving a nest of honeysuckle bark

the new moth, warming its wings for take-off

the greenfinch feasting on hips and haws

So let’s plant the gaps

give the hedgerow time to breathe

trying to be trees.

There’s too much to lose

to leave our hedgerows

For centuries, habitat creation was a serendipitous by-product of traditional hedgerow management: if you wanted to invent a wildlife habitat that represented perfect synergy between humans and nature, you’d design a hedgerow.

It’s often assumed that most UK hedges date from the Inclosure Acts of the 19th century. In fact, people have been enclosing land to consolidate land holdings and make farming more efficient since at least the 12th century. And many hedges and hedge banks are far older, dating back to the Bronze or even Stone Age, when settlers clearing the original wildwood for cultivation left strips of trees as boundaries and shelter.

As farmers tended their hedgerows in a way that worked for agriculture, wildlife thrived alongside.

The industrialisation of farming changed everything. Since the Second World War, we’ve lost half our hedgerows, ripped out in a bid to intensify food production and cut costs.

Though such destruction has now largely come to an end (in the main, thanks to the 1997 Hedgerow Regulations, mandating local authority permission for hedgerow removal), most of our remaining hedgerows are in decline.

With hedging no longer essential to keep stock in or out (fences are cheaper and easier), the motivation to care for hedgerows well has dwindled. Alongside this, traditional hedge management skills have been lost. Poorly managed, hedgerows are either turning into rows of trees (too little cutting) or losing structure and becoming gappy (overly-harsh cutting).

As a result, only 41% of hedgerows are in ‘favourable’ condition. The stitching that holds together lowland Britain’s iconic patchwork quilt landscape is breaking up. The species that make the hedgerow their home or rely on it for survival are struggling. Population numbers are falling, with some hedgerow-specialist species at risk of extinction.

There is hope. As biodiversity concerns grow, farmers are increasingly looking for ways to balance food production with care for the environment. The government’s new Sustainable Farming Incentive scheme makes encouraging promises. Organisations such as Hedgelink are working with landowners to provide training and support.

What can you do? Start to notice your local hedgerows. Talk to anyone you know who may be responsible for hedgerow management – farmers, landowners, local authority staff, councillors. Show you’re interested. Ask about the challenges. Don’t cast blame – it’s the future that matters. Point people to Hedgelink.

Find out more about why hedgerows are so important over on The Wildlife Trusts’ hedgerow page.