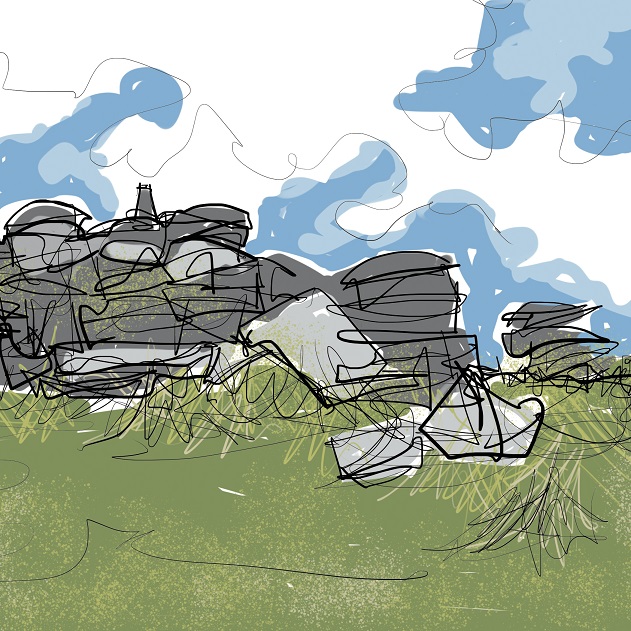 Her spongey sphagnum contracts in pain,
She holds on but in vain,
Her protective waters burst downstream,
Flooding careless housing dreams.

We didn’t see, she smoulders.

Peat has played an important role in the lives of Dartmoor farmsteads for millennia, whether for heating, cooking or selling as a commodity. It is no surprise, therefore, that it has also fuelled their folklore. On New Year’s Eve, all eyes would be on the peat fire. A merry glow foretold of a prosperous year ahead. However, should the fire smoulder, it warned of death.

Inspired by the concept of smouldering – and the fabulous word itself (along with sphagnum, thanks for that!) – I wondered whether Dartmoor herself was within her rights to smoulder. Humans make lousy tenants, so no wonder our time on Earth is looking increasingly temporary.

I confess, my family and I are shameless tor baggers. Indeed, the poem prompted much bickering over well-worn OS maps as we seized the opportunity to find new routes to photograph burned gorse. At least having written the first draft, I trod lighter and tried not to imagine the moorland wincing with each step.

You don’t have to go far to see evidence of ‘swaling’, the controversial burning of gorse moorlands. We might shake our head at Brazil’s attitude to the Amazon, but peatlands are our rainforests. They are nature hotspots. Numbers of meadow pipits have dwindled across lowlands over recent decades, and Dartmoor provides a vital sanctuary. Once you tune into these hardy brown birds, you catch the joy in their squeaky song.

In addition to being enormously important for wildlife, as stated by The Wildlife Trusts, peatlands such as Dartmoor, “store vast amounts of carbon, so are right on the frontline of efforts to tackle climate change and nature’s collapse”.

Peat is partly decomposed plant matter, and some peatlands are 10 metres deep. So why, then, are we sacking Dartmoor’s black gold on an industrial scale for garden compost when the arguments for protecting them are indisputable? Losing five percent of UK peatland carbon equals the UK’s entire annual greenhouse gas emissions.

Peatlands also act as a huge sponge, retaining water, so in the words of the Wildlife Trusts, they “are of huge importance for people too. They help to prevent flooding and preserve buried treasure from centuries gone by.” We destroy them at our peril.

Mother Nature sometimes has a voice, one example being “Nature Is Speaking” voiced by Julia Roberts. I love the concept that our actions will determine our fate. Mother Nature will endure. We just need to wake up to see her smouldering.

Visit The Wildlife Trusts’ peatlands page to find out more about this remarkable habitat and the essential role it plays in storing carbon.