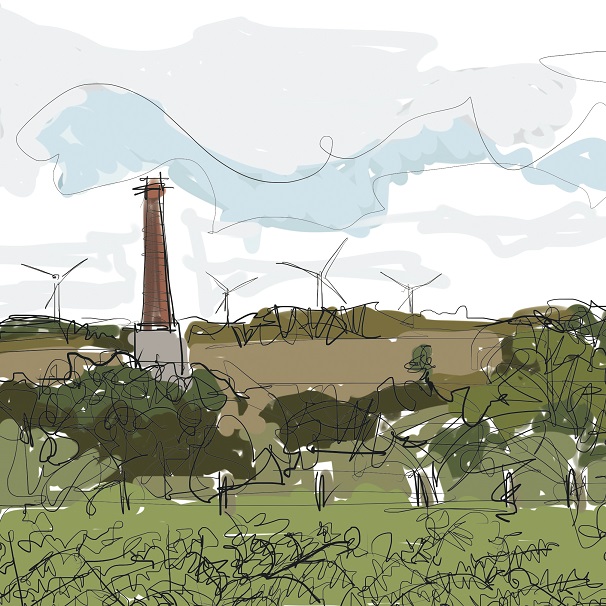 Air once broken with the clamour
Of iron picks, and the drag of coal wagons,
Cools to the sussuration of grasses
Recalling tropical seas
That once covered this land.

As ice retreated
It remained.
A puddle scrape,
Knit by moss, fringed by ferns.
A succulent sponge
To soak up precious water
And save us all from inundation.

Our northern rainforest.
The silent bog.

On a hot dry summer’s day there was little essential bogginess underfoot at Ford Moss in Northumberland. Warnings about soggy paths and helpful diversions went unheeded as I circled the paths around the raised bog, trying to get a feel for this wild habitat.

A raised bog is no beauty. It’s scrubby and desolate. Like many things of true worth, you have to understand what lies beneath to appreciate its value. Locked away below the rough-looking cotton grass and saturated sphagnum moss is water, and carbon. The elements of life itself.

Raised bogs were born as the ice-ages retreated, leaving shallow lakes, mere puddle scrapes compared to the oceans of water that once covered the land. Gradually, these lakes and hollows became filled with vegetation, ferns and mosses that, deprived of light and oxygen, over thousands of years, began to form peat.

The peat acts as a sponge, retaining water so that the raised bog is wetter than the surrounding land, which is what gives it its damp and boggy disposition. A local friend described a school field trip where the class bounced on its wobbly meniscus like a trampoline.

I walked through a rich soundscape of birds, insects and waving grasses that made me think of those long retreated pre-historic oceans. Butterflies and my first red damselfly of the year, showed that the wildlife recognises this as a special place.

The raised bog’s ability to soak things up is invaluable in keeping the land from inundation in heavy rain or flood. But it also acts as a carbon sink, locking away carbon dioxide, so it remains trapped outside the atmosphere.

When we think of ways of reducing the greenhouse effect that’s contributing to climate change, one of the easiest solutions is to plant more trees. But peatland is actually more efficient at soaking up carbon dioxide. In digging and draining vast swathes of it, we have lost the northern hemisphere’s rainforest.

Peat from Ford Moss no doubt kept many warm in years gone by. A brick chimney and derelict pit buildings mark where coal was mined from the late 17th to the early 20th century. Nowadays we know there are cleaner, greener ways to live within our landscape and fuel industry. The bog still works away, unseen, doing the same job it’s done for millennia.

Thanks to Northumberland Wildlife Trust for suggesting a location where I could safely visit a raised bog.

Visit The Wildlife Trusts’ raised bog page to find out more about this remarkable habitat and the role it plays in storing carbon.

One thought on “Raised bog”