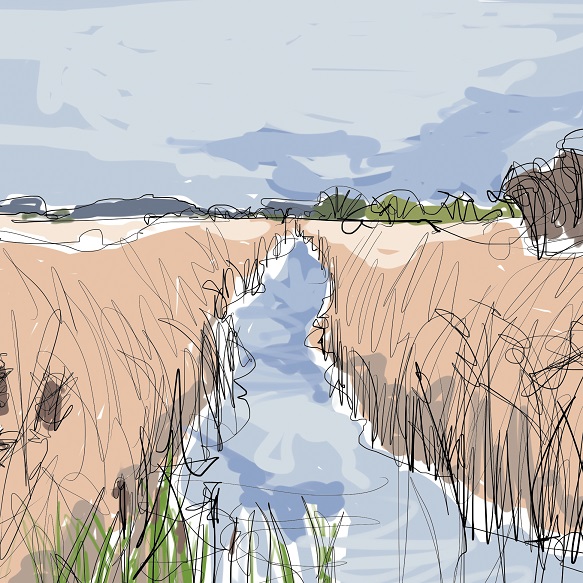 Where are they, then?

The rest of them?

The turtle doves to herald spring?

Bitterns, to stalk the curling streams of silver rudds?

Show me the slender crests of nested lapwings

And a snaking, shining, otter’s back.

Let my heart beat the echo of a drumming snipe,

As a harrier hangs, and claws for prey.

Squint through blinds of dusky reeds

To seek out those we almost lost.

Wetlands are one of our most biodiverse habitats, and they need us as much as we need them. Healthy wetlands support countless species and play an important role in slowing climate change by storing carbon. Modest human interventions, such as harvesting reed for thatch, and drying peat for fuel, once enabled wetlands to thrive. But times have changed – and now we need collective action to protect this habitat from industrial overuse and secure its future.

My poem focuses on Otmoor, a broad expanse of wetland in Oxfordshire that has long been fiercely protected by its people. In 1830, following landowners’ attempts to drain the wetland for farming, over 1,000 locals walked the seven-mile perimeter of the moor, destroying the new fences with hatchets and billhooks. In the 1980s, Joe Weston and Friends of the Earth protected Otmoor from the M40 by buying ‘Alice’s Meadow’. By dividing the meadow into 3,500 plots and selling each small plot to individuals around the world, they prevented the government from carrying out its compulsory purchase order. More recently, Otmoor was placed at the centre of a ‘development corridor’ for an Oxford-Cambridge expressway. Extensive campaigning followed, with plans shelved in March 2021.

On Otmoor, I was struck by the sound of birds, not cars. May is an important time in the life cycle of the wetland. Summer migrant birds arrive and the nesting season begins. There’s plenty to hear – although dense reed beds might prevent you from seeing much!

‘Booming’ bitterns are Britain’s loudest bird. Near extinction in the 1990s, there are now 80 breeding pairs of bitterns in the UK. Their calls echo across Otmoor at dawn. The rapid drum of the snipe, a wetland visitor currently on the UK’s Amber conservation list, isn’t a call at all: it’s the sound of tail feathers beating in the wind.

I worry about the future of wetlands, and of these beautiful birds. Although some species are doing well, their habitat is in decline – not just in the UK, but across the globe. We are the biggest threat to our environment, but in many cases we are also its only means of protection.

Happily, collective activism has safeguarded Otmoor thus far. If you can’t fight for a wetland on your doorstep, consider developing a bog garden at home instead. You might not attract a bittern, but you will be doing your bit to sustain a disappearing habitat.

Find out more about why the UK’s wetlands matter over on The Wildlife Trusts’ celebrating wetlands blog post.

One thought on “Wetlands”