‘Beneath suburban skies’: A Cartographic Apology
In our primary school, the name ‘Strawberry Fields’ always meant one thing: the kids from the Sally Army home, up on Beaconsfield Road, who suddenly turned up one morning, stuck around for a few weeks, then disappeared again. It’s now a quarter of a century since I left that school in Woolton and, unsurprisingly, I’m struggling to recall the names of most of the Strawberry Fields kids who passed through our classroom. Looking back, though, I can still clearly remember one boy, Brian, who appeared mid-way through our second-year in the Juniors. Brian’s school clothes were almost-but-not-quite right: he wore a grey shirt rather than a white one; his gym shorts were navy blue rather than black; his V-neck had an unorthodox red trim. I stood around, only semi-detached, as we all laughed at Brian’s idiosyncratic take on the uniform. I am conscious that I have still to say ‘sorry’. 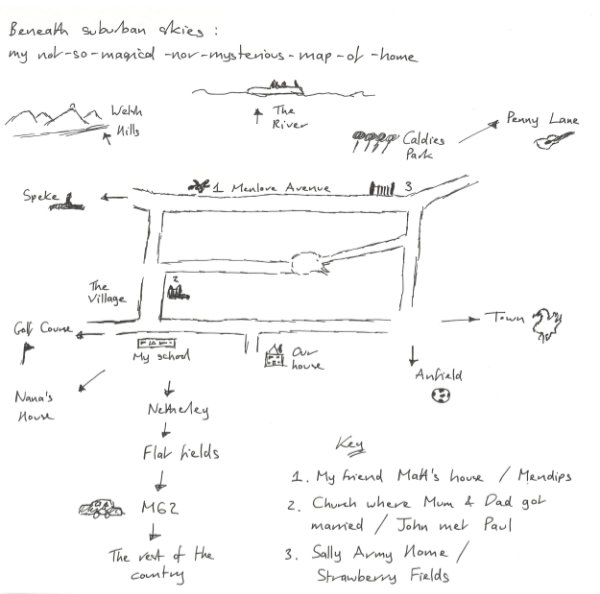 Creation Story
Mendips. Strawberry Fields. St Peter’s Church Hall. Growing up, those toponyms were simply part of my personal geography of suburban south Liverpool. They were the co-ordinates of the quotidian. In drawing this map, though, I can’t help but overlay those memories with more recent experiences of revisiting the city with my own children. I think of the Magical Mystery tour buses rolling down Church Road and the National Trust logos placed, improbably, outside an inter-war semi on Menlove Avenue. Yet, even in adulthood, I have difficulty computing why some people would travel halfway across the planet to see such places.