Boudicca kept a hare in the folds of her skirts. The direction it ran when released revealed the will of the gods in battle. It was said to scream ‘like a woman’ as it ran, terrifying her oppressors.

The hare at South Greenhoe Middle School was a place to climb and survey my oppressors. Its slim concrete column had arms like signposts spiralling toward the statue at the top. The metal climbing frame next to it was where the bullies hung out, pulling hair, pinching skin, threatening with their presence.

I liked to see the world askew, perching precariously by the hare. Or turning everything the other way up, hanging by my knees, hair skimming the concrete.

One day I was challenged to fight the red-haired girl. She was pale and quick. She expected to pound me. I expected her to. But some rage from underneath screamed out of me. 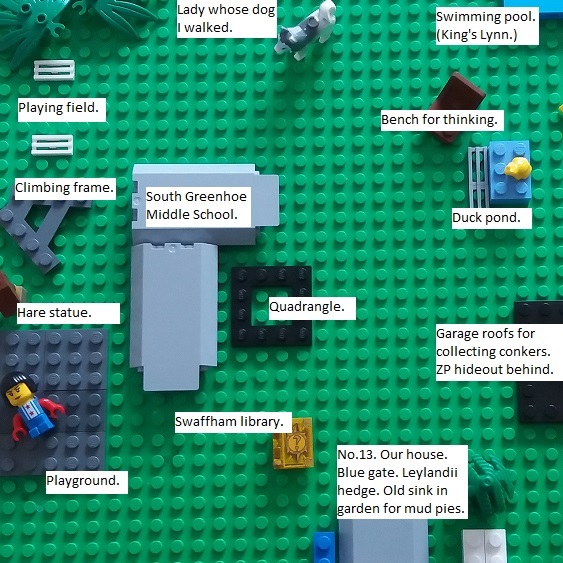 In writing my latest book, hares recur. They’re native to Scotland, which is central to the collection. But I’ve always had ornament hares.

My memory map featured a hare on top of a concrete spiral statue/climbing frame at my middle school. I don’t know if it was actually a hare, or if my memory is right. It seems an emblem of fear for me, and of conquering fear.

School was a place of refuge and torment. A release from home pressures, a place for bullies and essential friendships.

I released my hare into this prose to see where it went.