For years, I yearned to play a cover drive. The left hand batsman in me wanted to do unfurl a ‘Gower’. The ground where I grew up playing cricket was for right handers. On the lefthanders’ offside, there were a bunch of ferocious people who uncompromisingly pursued their evening exercises. Violently pinging a cork ball into them was not an option.

One day they had given way to a cooking program to feed the poor. Large cauldrons of food balanced unsteadily on rocks with logs of wood burning underneath them. The unfettered joy of a perfectly timed cover drive gave way to overwhelming fear as the ball dislodged one of the rocks and a cauldron of rice almost toppled.

Thirty five years on, people remember how the cauldron almost fell, how the quickly the players disappeared, how a bewildered cook steadied the cauldron. No one remembers the glorious shot! 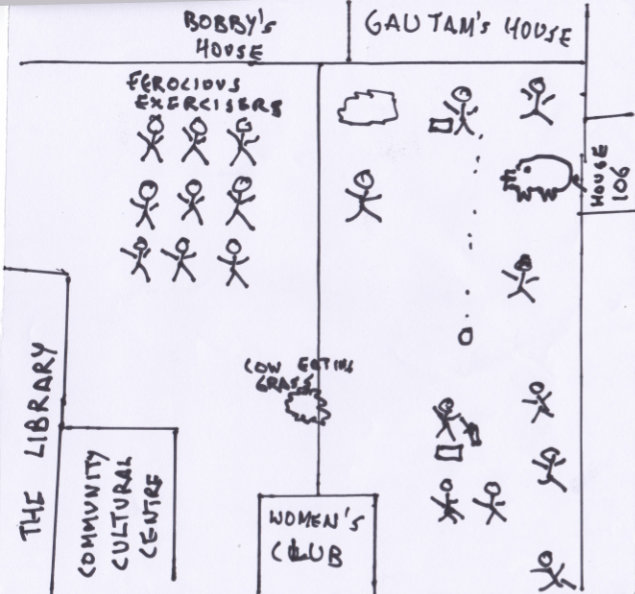 As I drew the map I remembered the ground where we played cricket. The ground had animals going through it all the time. Play would get suspended for a herd of cattle to walk through, the bowler would have to abort bowling mid action as a dog ran onto the pitch, there was a pig that slept at mid-off, Buddhi dropped a crow with a vicious hook shot.

I remember kind people giving an exhausted bunch of kids water to drink, us volunteering to collect the ball from Gautam’s sister, us drawing lots to avoid collecting the ball from House 106.