I can see school from home. It’s seems a few steps away, with no roads to cross. School is new. The houses are new.

At home, Mum is sitting on the floor, with four big bits of paper in front of her. She’s sucking on a pencil, thinking. Looking at her pictures of four men with beards. My mum can draw. She looks sad.

At school, Dad is in the hall talking to other dads. He’s pointing, hand on hip and serious face. Then scratching his forehead, which shows he’s thinking. He’s telling the men what they need to do to ‘make it happen’. And they listen. He’s good at that.

Home and school merge and I’m on the stage my dad designed. Behind me are the portraits my mum drew: John, Paul, George and Ringo. I’ve learnt the words to Eleanor Rigby. 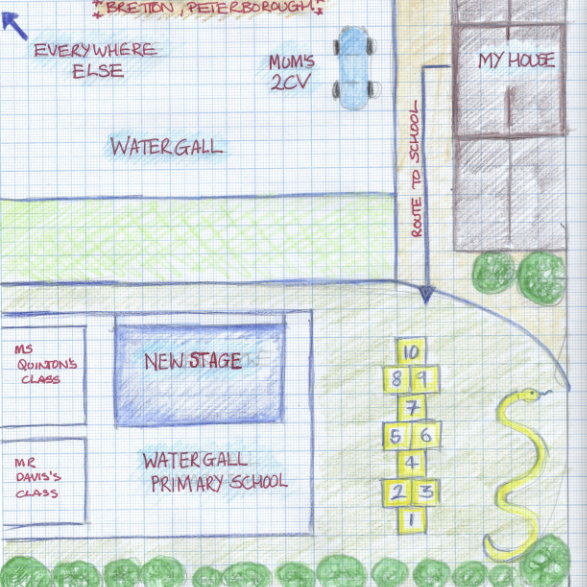 I lived in lots of houses as a child and so had many fragmented maps in my memory. This one just bubbled to the top. School was on the doorstep and I loved it. Though it’s hard to frame my nine-year-old thoughts, I think it was relaxed and collaborative. My mum and dad were a similar age to my teachers and I’m sure they were all very affected by the murder of John Lennon. And so they staged a musical tribute! Mum drew the backdrop and Dad built the stage. And lots of pupils learnt Beatles’ songs by heart.