Words by Sandy Wilkie, Photography and Illustration by Jane Marshall 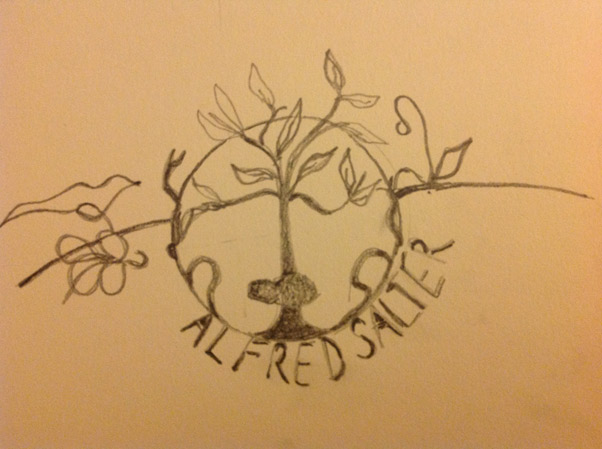 Picking up the author’s baton on Surrey Quays Road in the shadow of the Daily Mail printworks didn’t feel the most auspicious start to Mile 9 of the London Marathon. It’s raining – brush-stroke grey, water-washed flat tarmac. Perhaps this is a runners’ paradise; head down, count the paces, check the watch, keep moving on. But the hulking monolith of the Harmsworth Quays printing plant sits behind me, brooding. Built in 1989, now facing closure with the planned 2013 move of the Daily Mail to Essex, it symbolises the transitory nature of this mile. And yet, in this anonymous urban landscape sits a brightly painted snack van, serving travelling workers with steaming tea, hot rolls and a sense of place. 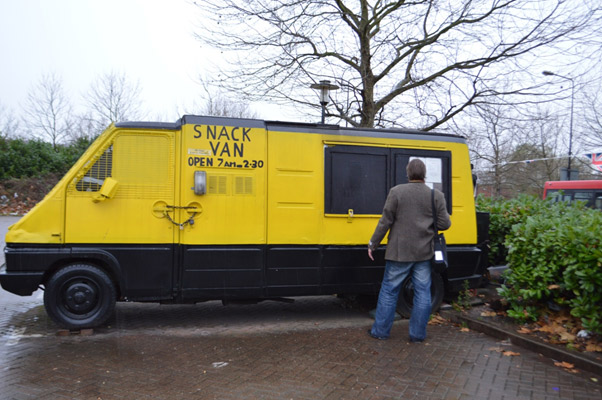 Surrey Docks forms the eastern part of Rotherhithe. The area has a strong connection to sea-faring trade back as far as Roman times. In the early 19th century, a new bill to improve the Thames as a tidal reach and the extensive development of wet docks shaped a new industrial landscape. River traffic became regulated and commerce flourished; trade from Surrey Docks was mostly with Scandinavia, Russia and the Baltic states. 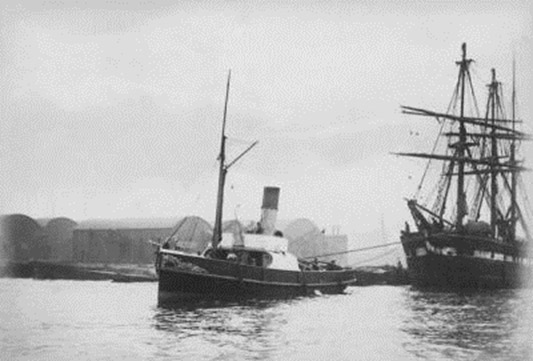 At its peak, Surrey Docks would have stored up to a million tonnes of timber; the prevailing smells in those days would have been of softwood larch, spruce and pine with engine oil from the ships, hoists and machinery. By the time of Charles Booth’s 1889 Descriptive Map of London Poverty, the pattern of interlinking waterways and yards is clear. 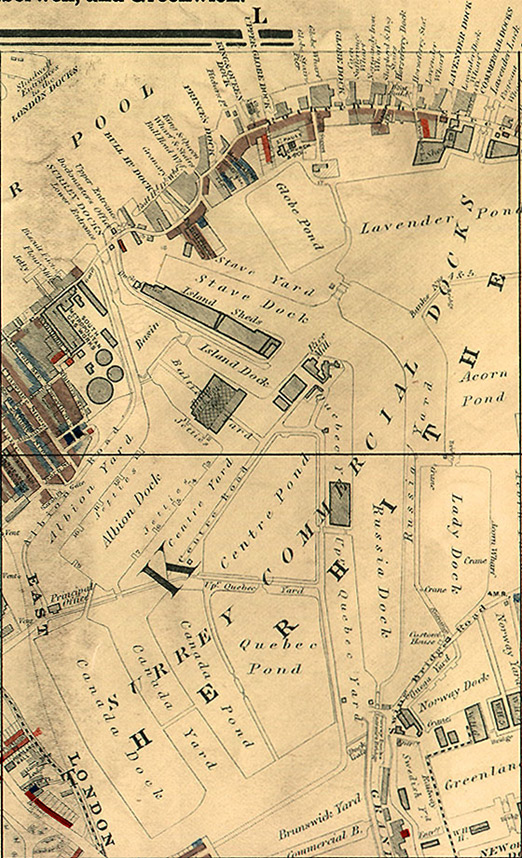 Surrey Docks operated well into the 20th century, with changes such as the rebuilding of Greenland Dock in 1904 to handle larger and heavier steamships (Ackroyd, 2007). The closure of the whole facility in 1970 by the Surrey Commercial Docks company led to a decade of dereliction and decay. But the patterns and outlines of a docklands landscape live on.

Turning right onto Canada Street, past the residential developments of Winter Gardens and Wolfe Crescent, you see the significant amount of redevelopment that’s taken place since Margaret Thatcher established the London Docklands Development Corporation in 1981. I’m walking over the site of Albion Dock and yards, yet the landscape has been transformed. The ghosts of a maritime industrial past live on, mainly through street names. Turning right onto Quebec Way, I pass the Alfred Salter Primary School opened in 1995 by David Blunkett to meet the needs of the expanding local population of the renamed Surrey Quays in 1989. 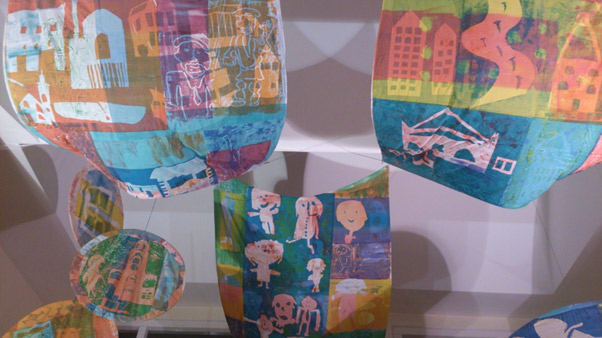 Regeneration brings in new urban vistas and voices; we try to cast off the ghosts of our industrial past. But as I pass one of the London Marathon water stations, Quebec Way swings round to the right to follow the old road that separated Quebec Yard on the left from Centre Pond and Quebec Pond on the right. The roots of this particular regeneration are firmly on the lines and shapes of the earlier Surrey Docks landscape.

At the far end of Quebec Way, a double roundabout next to Cafe East signals where Mile 9 turns left onto Redriff Road. It’s on this gentle gradient up towards Rotherhithe that most of the Surrey Docks maritime legacy can still be easily traced. On the right-hand side of Redriff Road, next to Hudson Yard House, lies a swing bridge mechanism used to carry the original road over lock gates that gave ships access between Greenland Dock and Russia Dock. Under the road I can see the lock gate mountings and water depth numbers carved in granite. 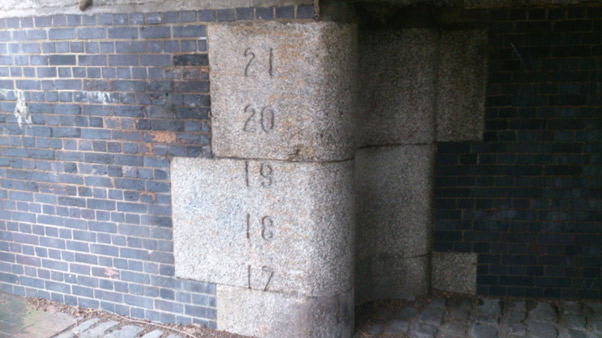 The maritime links of the Surrey Docks area are also echoed in the fashionable waterfront housing developments between Greenland Dock and Norway Dock. The street names Omega Gate, Finland Street, Norway Gate, Helsinki Square and Odessa Street all conjure up images of heavily laden steamships bringing in cargoes of Scandinavian timber. In November 2012 when I first walked Mile 9, I stumbled across the demolition of an 1871 Norwegian Seaman’s Mission Hall between Redriff/Salter Road and Rotherhithe Street. The foundation stone for this brick building was laid by Prince Oscar, the Crown Prince of Sweden. The mission hall was used by seafarers until the 1920s, when it became part of the Docklands Settlement project to give local families and the young unemployed of Rotherhithe a haven of friendship, warmth, refuge and recreation. 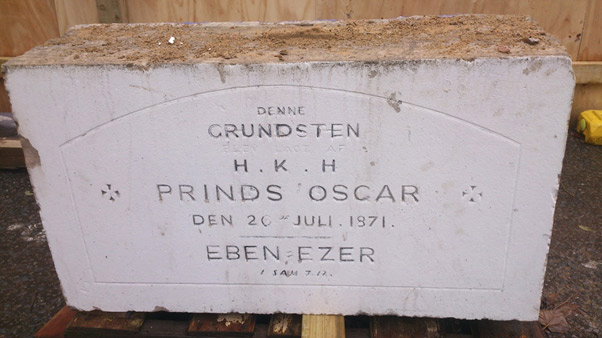 But with the demolition of the historic Norwegian Seaman’s Mission Hall the cycle of regeneration continues. The development of the new Dockland Settlement complex will be complete by the end of 2013. It aims to provide 28 new homes, including some for social rent and shared ownership status. It will also have new community and sports facilities for local people.

As the route of Mile 9 continues up Salter Road towards its end point, the blandness of the modern urban streetscape masks some hidden gems. The walk up Redriff Road a few minutes earlier passed the access point to Russia Dock Woods. As part of the Docklands regeneration started in 1980, Russia Dock was infilled and planted as a 34.5-acre woodland. It still contains dock features including capstones, bollards, mooring chains and tracks. With a small stream running through it, it’s now the home of grey squirrels, magpies and even a kingfisher. This is a little haven of tranquility within the busy streets of Rotherhithe. 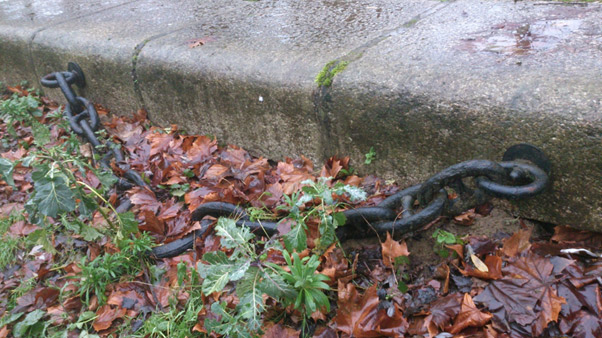 As the walk approaches the start of Mile 10, a right turn and then a left onto Rotherhithe Street takes you down to Surrey Docks Farm. This was established nearby in 1975, and in June 1986 was moved to its present site, 2.2-acres on the river Thames at South Wharf. As a working farm with charitable status, it serves the local community in valuable ways. A Young Farmers project brings in local school kids to learn about animals and how they are reared. Likewise, the New Leaf project is for adults with learning disabilities who attend the farm four days a week. Backing onto the Thames Path and facing the gilded edifices of Canary Wharf, the farm provides a rural experience that makes visitors feel closer to our countryside and pre-industrial farming past. 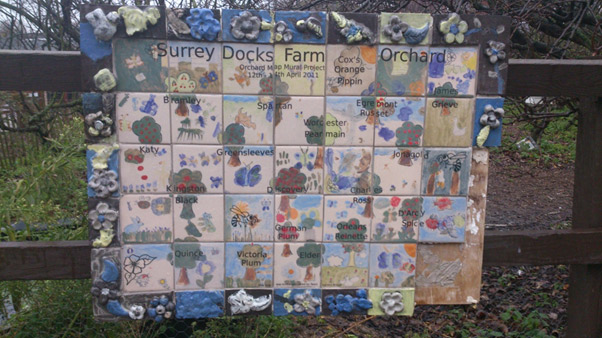 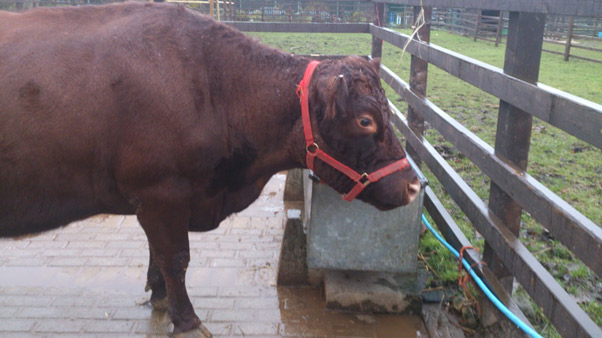 The walk along the otherwise unassuming urban landscape of Mile 9 has revealed some interesting aspects of maritime industrial foundations, regeneration and green space. Buildings and land-use come and go, yet something of the past remains in this cycle of renewal. Perhaps the most positive message from this route comes from the diverse voices of local people who are here in the present, but point at the future.

The work of the Surrey Docks Farm staff and volunteers to engage with the local community through educational experiences is admirable; their commitment and dedication to influencing contemporary lives shines through. Otherwise anonymous industrial estates units on Quebec Way are actually home to three evangelical churches, with connections to Nigeria, Ghana and Sierra Leone. Next to these buildings is the Virtex Wholesale shop, established in 2011, which supplies Afro-Caribbean foods to local residents and London restaurants. A wonderful array of dried catfish, West African herbs, exotic flour and oils are on display, illustrating the new vibrancy of Surrey Docks. 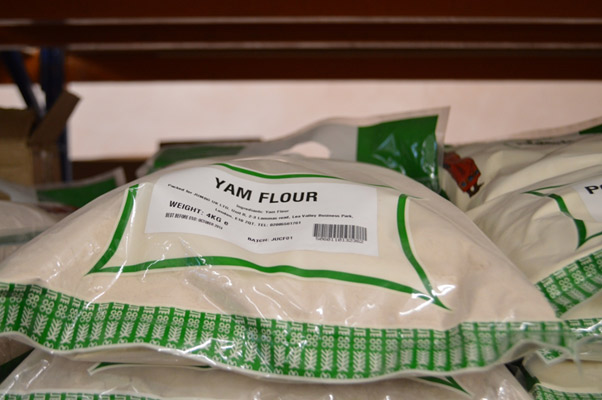 And it’s the children who will inherit this regenerated landscape. The motto of Alfred Salter Primary School near where we began Mile 9 is “Building strong relationships, celebrating difference and creativity today. Inspiring individuals who fulfil their potential as world citizens of tomorrow”. My hope is that each and every one of these 470 or so children will grow up to appreciate the legacy of Surrey Docks and look ahead to their future in this community, or further afield, with an awareness of both the aspects that remain constant and the things that change around them. 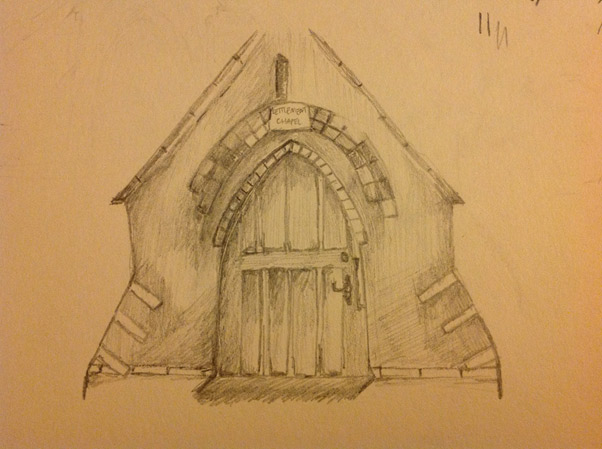 “Fifty years, and the countryside will know the old landmarks no more. They will have vanished as the monasteries before them. At that moment, however, Mary’s mind was not moved by these considerations”