Letting the days go by…

Stella grew up in Cobham, Surrey and was an account manager in a big ad agency in Canary Wharf. She moved to Bermondsey as it was cheap, and had good transport links to work through the Rotherhithe Tunnel.

The tunnel had always scared Phil as a child. Joe, his older brother, said it was a black hole which sucked in traffic. ‘Young Pip’, as he was known, had a good imagination, and pictured helpless drivers spat out into an alternative universe. Then, one day, he worked out that cars came out as well as going in.

His family had lived in the area for donkey’s years. He was born in Dickens House, right opposite where Bermondsey Jubilee Line station is now. Stella would head into work from there, once the line extended its silver reach south of the river.

His dad worked at the local Peek Freans factory, and made Ginger Nuts, Bourbons and Custard Creams. He was a hard-nosed, gravel-voiced man, but after a few pints, had a heart as soft as London clay. His mum had high hopes for her youngest son. He’d always shown interest in the arts. She said he should be a writer as they lived in Dickens House. His Dad joked that he’d probably be a waiter. Joe said that he’d always be a wanker.

Pip was drinking with work pals in The Boatman on the night he met Stella. He worked for the council and had spent the afternoon scooping up dog shit in Southwark Park. He didn’t mind. He had set his sights low and liked being outside. He listened to music on his Walkman, and carried a pocket camera and notepad to record the daily events of his life. He made sure no one else knew. They would only take the piss.

He had no idea where this creative impulse came from. No one in his family had ever shown the slightest interest in the arts, although his Auntie Doris once sold choc-ices at the London Palladium. She was standing in for a friend who’d caught the clap off a Latvian sailor.

His future wife came into the bar that night with a friend from work she’d invited round for supper. She lived nearby in Drummond Road. The Peak Freens factory had closed in 1989, and she slept near the spot where his Uncle Tommy used to taste Twiglets for a living. They’d peered through the steamed-up pub window before taking a few tentative steps in. It was the best time of day: early evening, just before tea. Men with red faces in white overalls shouted at each other. Pints were consumed at an alarming rate. Crisps were crunched noisily. They ate with their mouths open. “Toto”, whispered Stella, “I’ve a feeling we’re not in Kansas anymore.”

He saw the girls come in and made sure he found a spot at the bar right next to them. At first, he couldn’t decide on which one to go for. Both were really attractive, well-dressed and well out of his league, but he soon settled on her. The other one was holding a tissue over her mouth to stop herself gagging. It was smoky and noisy and she didn’t want to stay. The asparagus tips were beckoning back at Stella’s flat.

He slapped his half-empty pint on the bar, turned to her and said – “So, sweetpants, what y’ gonna buy me then?” She stared straight back at him, liked what she saw, and asked the barman for three Campari and sodas. The barman, a miserable walrus-man known as Smiler, laughed, for the first time in four years. Pip fell in love with her right there and then.

She loved his rough charm, and the fact that he read Dickens, but hadn’t told anyone this except her and his own mother. They both had the same favourite song, Talking Heads’ ‘Once in a Lifetime’. When they went out and got drunk they’d sing ‘Same as it ever was’ repeatedly on the last bus home. When she berated him for not fulfilling his potential, he shrugged and sang ‘Letting the days go by’, and held his hands up like David Byrne impersonating a Deep South evangelical preacher. He made her laugh, and her salary introduced him to wholemeal bread and good red wine.

Her mother thought this was just a phase she was going through. She knew from experience, if she challenged her, it would only harden her resolve. Her father loved her more than Margaret Thatcher and the Daily Telegraph crossword, so anything she did was OK by him.

His family were made up. “She’s class that one”, said his dad. His mum couldn’t keep the smile from her face. But in a small dark place in her heart, she knew it couldn’t last.

They got married, in a bit of a hurry as Jake was on his way. Her father, meeting his family for the first time, quipped that the last time he saw such a ragged bunch of men in ill-fitting suits, they were awaiting judgement at the Old Bailey.

They started to drift apart when Jake was nine, and Jodie, their second, was seven. She took up running and he took up drinking. They used to share a glass of red wine once the kids had settled down. Now he swapped back from Pinot Noir to pints. She started training for the marathon, and he encouraged her, so it would get her out of the house and off his case. There were still brief glimmers of affection, but mostly, things just stumbled along, unravelling gently.

On the day of the marathon he gave her a kiss and squeezed her bum. He whispered that he still loved her and apologised for being an arsehole. He wished her luck. She hugged him and held back the tears. She reminded him to be at the Surrey Water bridge around 11.30.

The pubs were open early as it was race day, so he went to The Boatman. He bumped into Bill. They had been best friends at school. Bill was bitter and drank it by the bucketload as if to emphasize the fact. They had a couple, then he realised he really needed to get going. He fancied another one. He liked Bill and didn’t want to leave him alone. She wouldn’t notice would she?

Bill had no one. He had her and the kids. But he missed not having any responsibilities, getting drunk, and even falling over now and then. It was true, she had civilised him, and made his life richer. But he also felt tamed. A wild beast in a gilded cage; fed red meat at regular intervals, but neutered – rendered harmless and insignificant.

He ordered two more drinks. Bill hugged him. He felt good, rebellious, back in the jungle once more. On the prowl, stalking prey. He ordered two packs of Cheesy Wotsits to celebrate.

She was doing well. She kept time with her race plan and was well hydrated. She was in a good mood. Pip had moved her that morning. Her mother, friends and relations had been wrong about them. Yes they argued and didn’t have a lot to say to each other these days. But they had had a lot of fun over the years, too. He could still surprise her with his tenderness, and make her laugh at the most mundane things. At least they had stuck together, unlike a lot of their friends.

She passed Lagado Mews. It was only a short distance now to Surrey Water. Then she hit the bridge.

He was nowhere to be seen.

The bastard: The dirty, lying, lazy, shitting bastard. She almost felt like turning round, going home and packing her suitcase. But no, he wouldn’t ruin her big day. She wouldn’t be dragged down to his level. She didn’t need him. She could leave him now the kids were older, they would cope – they probably wouldn’t even notice he was gone.

She carried on running, focusing on the race and her target time. Then, when she got to Brunel Road, she could just make out some lunatic who’d broken through the watching crowd, and was heading in the opposite direction to all the runners. What an idiot. But, as he got closer, she recognised the man from The Boatman all those years ago. He was running straight towards her, looking flushed, sweating and clearly out of breath. He’d grabbed a bunch of flowers from the garage: “Sweetheart”, he roared, “I’m sorry I’m late. Go girl, go… I fucking love you!”

And with that she melted, reluctantly at first, then grinned, blew him a kiss, and shouted back, “Same as it bloody ever was!” She could hear him singing “Letting the days go by…” as the race marshals dragged him away, his arms flailing wildly in the pale April sun. 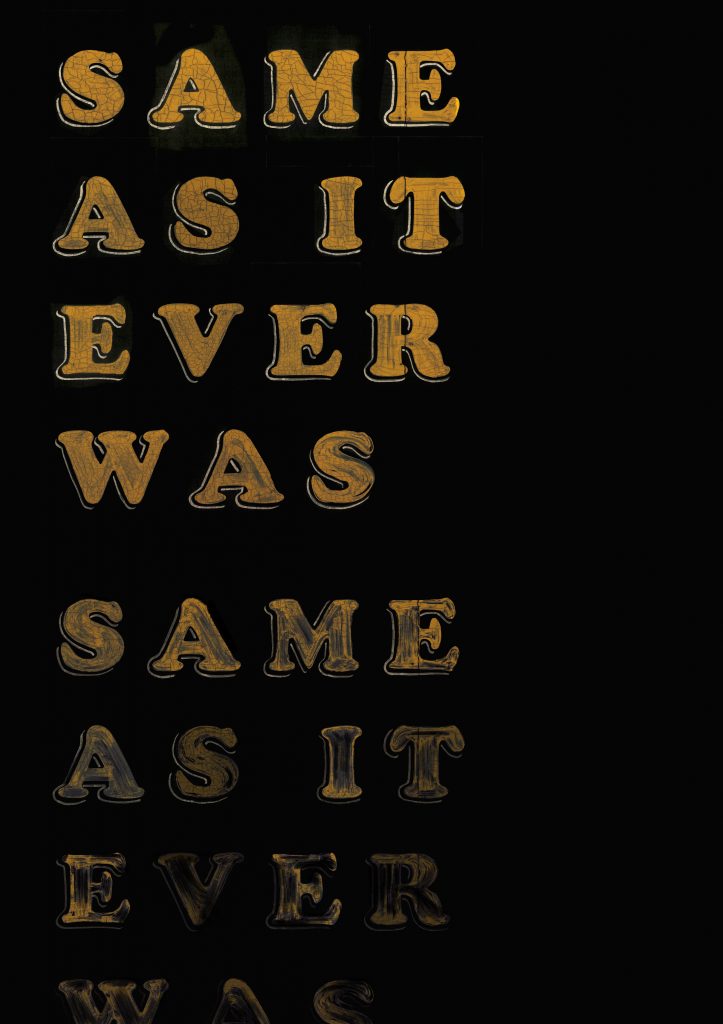 Run, run, as fast as you can

We skip up the station steps Millie and I. We’re at Bermondsey, the end of my mile. The sun is shining, the crowd’s cheering, and the runners are sweating. There are drums and shrill tin whistles. It’s a carnival.

I see the top of a gingerbread man and my heart swells with pride. For him, for me, and for everyone who’s taken part in our project, 26 Miles. He’s our mascot you see, the icon we use on our twitter feed.

There’s also a biscuit theme running through my story, Letting the days go by. My main character, Pip, is born just down the road from the now defunct Peek Freens factory. This is where they used to turn out Custard Creams, Bourbons and Ginger Nuts in their millions.

Every short story should contain at least one biscuit from my point of view. Chekhov loved a chocolate chip cookie. And Raymond Carver always pushed for Jammy Dodgers to be included in his work. Sadly, he was overruled by his agent, and slipped into alcoholism as a result.

Just like biscuits, the runners themselves come in all shapes and sizes. Anyone in fancy dress gets a big cheer. Charity fundraisers are popular too.

We line the streets while some locals peer on from their balconies. They live in hastily assembled post-war blocks. Sometimes cheek-by-jowl with newer, smarter flats. They have the best view, but somehow don’t feel part of the party: Bemused onlookers, left to clear up the post-race mess.

The gleaming towers of Canary Wharf loom large to the east. I think about this big city I love. We’re all Londoners today. I come over all emotional, I hadn’t expected this. Maybe it’s because of Boston? Maybe it’s because our own written race is over. Maybe it’s just my sweet brown-eyed girl grinning up at me over her Coke as I glug on an ice-cold can of Heineken and toast the day…