Mile where I love

Words and images by Jane Eden

Keep us in. Keep us out. Keep us down.

I live in a tower block.

The lifts are dark. They have been for a while.

I step inside. Rise to the sky. One mile high.

Twentieth floor. Through a blue door with double locks.

In my bedroom a bed, a desk, a chair.

My mirror – One Canada Square.

You have your name on your tower.

Have mine on mine

Scratched in metal on a sign that says danger of death.

You live in a “luxury apartment block with stunning views.”

That’s what your estate agent said to you.

But I see the same view you do.

Right through your window.

You drink too much.

I watch you weep. Head in hands.

When you see me on the street you look right through me.

You try to keep me out.

You don’t know one day I slipped in the door behind you.

Seen the floor you stop at.

On all of you.

You’re getting ready to run.

I watch from behind steamy washing on my balcony.

Twist it around me.

I see you shut your door. See you hit the street.

I see you running old man.

And I wonder who you’re running from.

From here. To there. I enter this mile an innocent man.

At race pace the bones of my feet bend against the cold.

Sweat pushes through skin barely keeping me in.

Hips are wheels dropping off a spindle.

Feet don’t go one in front. Side to side.

Knees fold. Hold. Each other up.

Long sound of brakes – the single note of a Double Decker

Slices across. Me. Heehaw chords. Seesaw –

Time stops. No-one gets off.

I have my eye on you still

And I watch the old woman in the orange tartan hat

Push her green shopping trolley past the red bus.

She got that hat at the Cancer Research charity shop.

She doesn’t know it’s the hat my mum wore.

And it wasn’t even cancer.

She doesn’t notice the bus.

the whole neighbourhood’s been out to get them.

This makes her happy like maybe she has never been happy before.

And no-one will know.

And cut her custard slice into three.

She used to be a butcher’s girl.

And spill her tea. And forget the custard slice is on her knee

Sees it on the news.

The thing she passed by.

And she’ll see the custard on the laminate mixed in with dog hair.

The dog that died a year ago.

The doors open. A man is thrown out. He drops to the pavement. He is Asian. Does that matter? A book hits the pavement. The pages flutter. The bookmark is three quarters of the way through.

A cry goes up.

The boys jump off the bus. Six of them. Hoods up.

And the man. They raise him up. His feet dangle.

The choreography. The kicks.

They dance around him.

One boy inhales it all into his mobile. He’s got an eye for this.

The passengers look straight ahead. Nothing to do with us.

The bus shudders. A majestic bounce for each step descended.

The girl sidles off the bus. She is black. Does that matter?

Dimples in her flesh. The laces of her black shoes undone.

The boys stand back. This is all for her.

She kicks the man. Clumsy. Unpractised. She roars.

Draws back her foot and kicks her soft kicks.

Her shoe comes off. Those laces undone.

She swings her schoolbag full of folders and books and an education.

Swings it over her head. Smashes it into his ribs.

His eyes open and close.

She does it again. Queenly purple glitter on her lids. Her eyes crazy cataract clouds. White spittle on her lips.

She pulls something from her school uniform jacket. Draws back her hand.

The jacket was supposed to last until she leaves school.

Mrs Awololo will mend it but it won’t be the same.

She won’t see the difference in the dark room they sleep in together.

It won’t matter because the girl won’t be wearing it where she’s going.

The knife goes in.

The Asian man flaps – fish out of water.

I try to shout at the boy who’s getting it all on his phone. My mouth spews impotence.

It’s the knife Mrs Awololo uses for carrots and onions. Not meat.

Celia looks down. The pot of eye shadow, smashed, dusts the ground. I bought her that. £1.99. The sticker’s curled but still on. I should’ve taken the label off.

Celia is  amazing in her white polo shirt. Even though she’s big, her breasts are flat – like dough before it rises. Later I will spread those legs against the blue and gold swirls of the always damp carpet as Mrs Awololo makes our tea and looks for the knife in the drawer. Celia will say, “Don’t come in, we’re doing maths.” Maths. That’s how I got into this. Into her. I’ll coil my finger into her knickers, tug on the elastic. The skirt stays on. Those concertina pleats. Those tight socks. I’ll shove my hands up the front of her shirt. Hang on to those unrisen breasts. Watch her eyes go back in her head. She looks ugly when she comes.

The Muslim guys walk down the road, on their way to print tomorrow’s news. They see the man. They run. They don’t know him but they raise him up, lower him back on the bus. Block the door from us. Vigilantes. The people’s heroes. They’ll be made a fuss of in the shopping precinct tomorrow. Next month they’ll take it further and save a young boy but one of them will die doing it and people will read about it in the papers and put flowers on the pavement.

And we hear a woman on the bus scream, “Drive. Fucking drive!” One of us sidles to the little door in the side of the bus that we think opens the doors in an emergency. The woman’s stabbing at her phone. 9 9 9. The bus takes off. We batter at the moving doors. Try to follow. But not really. It’s time for tea. We have other things to do.

We hear the song of the police. Helicopters start to go up. It’s already on Facebook.

Celia, uninterested, walks off, her legs beating against each other. She turns the corner. The eye shadow still on the ground, even though there’s a bin two metres away. That’s not right, is it? When we get married I’ll put my foot down about stuff like that.

And the police will knock at the door. And the knife is back in the drawer.

Celia will look them in the eye and say, “I wasn’t there.”

She’ll suck her cheeks and say, “He looked at me.”

They’ll say, “He didn’t give you a second glance.”

I shrink into the night. I won’t be a witness. The police will appeal. But I won’t come forward.

The old woman bolts the door. Changes the channel. Still in her hat.

You’re back in your flat. You don’t drink tonight, but you can’t stop weeping.

I tell you bruv, when you jump under the pressure of the sky, I’ll tell your story.

You can rely on me.

By then we’ll know his name.

And four of you will go to jail.

I raise my eyes. There’s a rope of stars that I could climb.

This mile is mine. 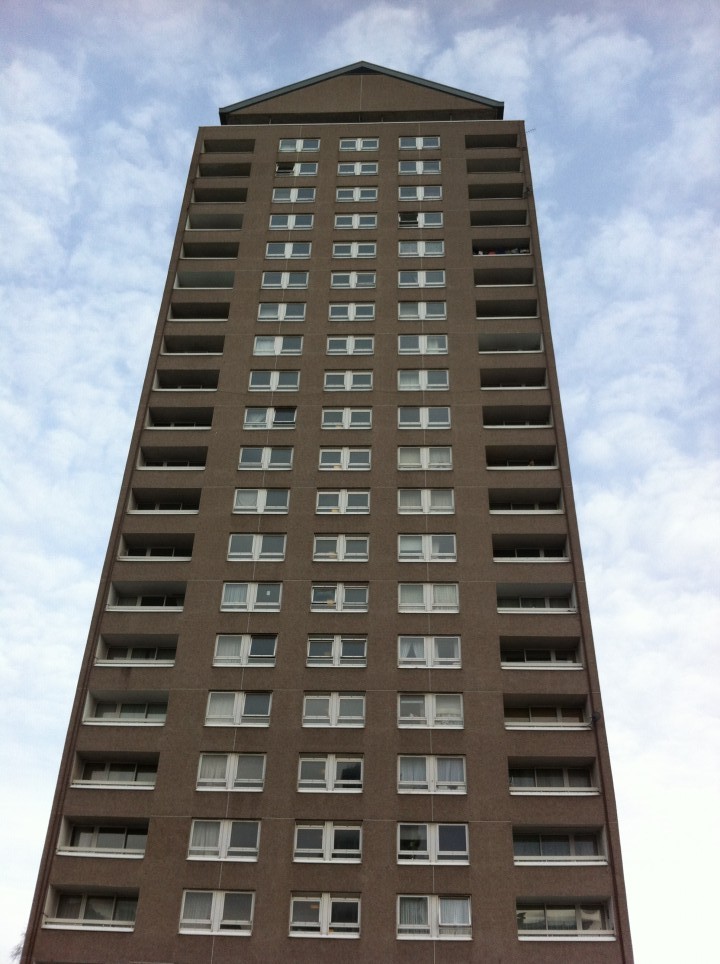