The year is 2213. Brian, having had an uneventful 40-year career as a historian, has brought some excitement into his life by leading walking tours along the road that bisects the Isle of Dogs. (The road formerly known as East Ferry.) We join him outside the Lord Nelson pub just as a new tour is about to start.

“Hello, hello and welcome to the start of our walk. Now, I know what you’re thinking: why has our tour guide brought us to what appears to be London’s dullest mile? But, please bear with me, as I think you’ll see that the Isle of Dogs holds many intrigues.

“The first thing to note is the name: the Isle of Dogs. No one knows how the name came about, because, as you may have noticed, this is not an actual island. But, many people think the name arose because a king kept his hunting dogs here in the 14th century. What rubbish! That’s just a myth, which we historians eschew completely. No, the truth is much simpler. This was once marshland inhabited only by ducks and the true name of this place is, in fact, the Isle of Ducks. So, the residents weren’t the king’s hunting dogs; they were the king’s hunting ducks. Wild beasts they were, with their webbed feet, vicious beaks, plum sauce and pancakes.”

The tourists are enthralled by this historical fact and one person whispers to his friend ‘This guy clearly knows his stuff.’ Smiling, Brian continues his tour:

“Here we are at Millwall Park. As you can see, archaeologists have been digging here and have found some curious artefacts. Aha! This one’s particularly interesting. It’s a piece of old leather. This piece of leather was the world’s first ever football. Now, do we have any West Ham fans in the crowd today?”

An eager boy, wearing a football shirt, raises his hand. Brian winks at him then rambles on:

“At one time this was London’s one and only football ground. And, even before the glorious game was created, people from all over the world came here to watch the games. Which is how it came to be that the game of football was invented right here on this spot in Millwall.”

A few of the tourists are nodding in agreement and a woman says ‘I always wondered about that.’ By this point, our hero Brian is in full swing:

“Now just up here on the right is something very exciting. We’re a bit tight on time, but I must show you this. You’ll regret not hearing about it.”

‘I’m going to use this for my history homework,’ comments a teenage girl at the back. Brian, ignoring a sign marked “Private – archaeological dig in progress” jumps over a low fence into a deep hole. He emerges a few minutes later somewhat dirty and holding something in his hand.

“Now this is our very latest discovery. It’s a piece of rope dating back to the early 1900s. We’ve unearthed miles of rope along this stretch and I’ve made it my personal mission to understand how there came to be so much of it. The clue, of course, is in the name on this plaque here: The Rope Walk.

“There have been many theories about the origins of this name. And, in fact, there are some amongst my esteemed colleagues who claim that this was once the site of Hawkins and Tipson’s Globe Rope Works. A rope-making factory that was supposedly in business until 1971. But, I’ve seen no such reference in my personal searches of the historical archives. I looked under ‘R’ for rope and ‘W’ for walk, but I found nothing. No. I think the clue to this enigma is in understanding the lay of the land. As I’ve mentioned already, this was once marshland. Traversing such boggy ground couldn’t have been easy, so, to get around the problem, they built walkways. And the material for these walkways, I hear you ask? None other than rope.”

‘Oh, that’s why this tour is called The Ropey Walk’ says a tall lady. Brian seems pleased by this eureka moment and waves his group along:

“And now we’re at the site of the old Mudchute station. This area is ripe with history. Just as the stench from the mud deposited here was said to be ripe, in years gone by. We don’t know what kind of a station Mudchute would have been, as the only thing our archaeologists have found here is mud. Tons of it. And, if you look closely, you can see that the mud is formed into large, sloping banks. The purpose of these banks has long been a mystery, but I have a theory. Does anyone here enjoy tobogganing?”

‘I always wanted a toboggan when I was a child, but my mum said we couldn’t afford it,’ remarks a man, sadly. Brian looks sympathetic. He continues:

“Everyone loves tobogganing. And our ancient ancestors loved it too. But, in the 1880s snow was often in short supply and was reserved for the enjoyment of the rich. So the poorer people, who couldn’t afford toboggans, used to slide down these muddy embankments on burlap sacks for fun. The sport of mudchuting became quite the event, especially on Sundays when people were given two hours off work. It’s said that there were even mudchuting competitions, with the winner being given an extra slice of stale bread at suppertime as their reward.”

We hear the sound of a train overhead as it pulls into the still operational Mudchute DLR station. No one notices this and Brian leads the group on:

“And here we are at Crossharbour station, where we have our last historical artefact. You see these two footprints in the tarmac? Using the latest technology, our scientists have been able to date these prints with pinpoint accuracy. They were left here on 21 April 2013–

A woman at the back interrupts.

‘Do you know what day it was?’ she asks.

“Actually I do. It was a Sunday, and the time of imprinting is estimated at around 11.30 in the morning. Give or take twenty minutes.”

The woman interrupts again. She seems quite excited and is scribbling notes.

“You are indeed right, madam. These prints were made by some type of fitness footwear. Here’s what we know about them:

Judging by the size of the footprints, the depth of the impression in the tarmac and the spacing between the left and right feet, we can deduce that this was a man, approximately 1.78 metres tall and weighing 66.9kg. We’ve determined that he was moving at a fast pace. In short: he was running.

Unfortunately, we may never know what he was running from or, indeed, what he may have been running towards. We can merely hope that he got there in one piece.”

The boy in the football shirt places his feet in the footprints and adopts a sprinting position. Brian feels the time is right to conclude his tour:

“And here we are at the end of our walk: Marsh Wall. This is where our journey together must end, dear friends. But, I can see my esteemed colleague approaching and I will leave you in her capable hands. She has a pretty interesting tale to share. But, I’d take it all with a pinch of salt if I were you. Stories cannot always be trusted.” 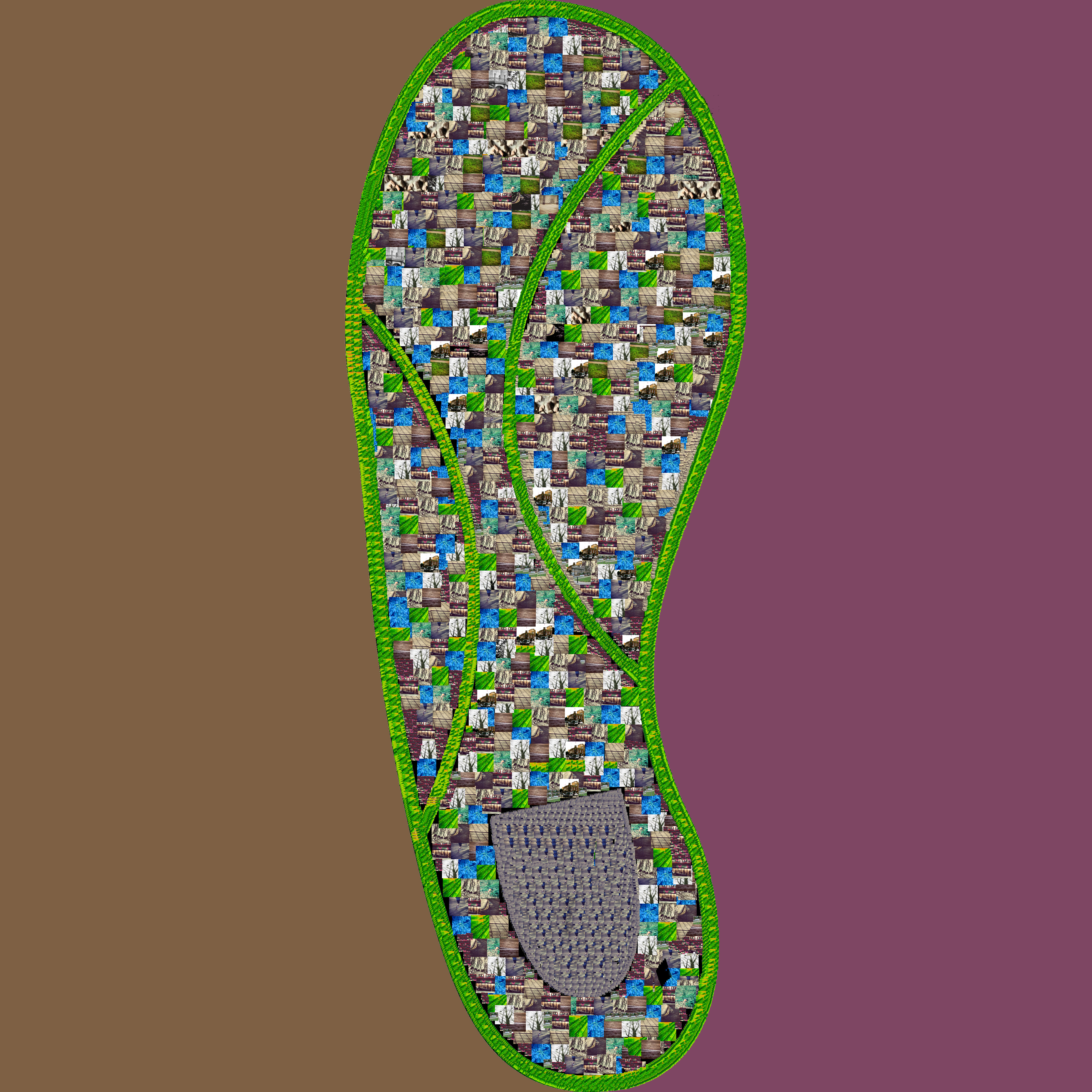 “The shoe print is made up of a collage of photos taken when walking the mile. The images represent the layers of social and physical history that has shaped the mile as it is today. This is the rich history upon which the marathon runner makes their shoe print as they run through the streets of London. To explore the footprint you need to zoom in close to see the detail that makes up this mile.” – Anj Cairns