Vanbrugh Park/Mycenae Road junction to 3 The Village, B210 by the Co-op

Words and images by Cle Morse-Privett

Amelie stood on the bridge. She didn’t really want to be there at all. It was far too early to be out in the cold. She looked at the lanes of cars rushing past below. Then further into the distance. Down to the Docklands and the Thames. The cars were dizzying in their speed, and they were all on the wrong side of the road. It felt as alien as water swirling the wrong way down a plughole.

She still hadn’t come to terms with how fast things moved in London. Even the people moved too quickly. But the days, for her, moved slowly.

Eventually, in the freezing haze of the too-bright-too-British morning, her eyes settled on the road signs below. To the O2 and Peckham and Central London. And to Dover.

Amelie hadn’t learned much about Britain in her 22 years, but she knew all about Dover. It meant white cliffs. Bluebirds. Dover sole. The British loved that, sole. But sole and soul weren’t the same thing in English. That ‘u’ made all the difference.

Most of all, Dover meant over the sea to home.

She’d arrived at St Pancras three months ago, wide-eyed, her violin strapped to her back. It was fair to say she’d liked what she’d seen. All red brick and arches, dappled light and Gothic grandeur. She’d wondered who’d built it. If first impressions were anything to go by, London would be, well… it’d be okay.

For three months now she’d called Charlton Road her home. Sharrrl-ton Rod. She repeated it softly to herself this morning, as she made her way to the bus stop. It had been nice here once. She could tell that from the houses. She walked past a row of Victorian shops, steel-fronted and given over to electrical suppliers. Today it was busy and bleak and full of raucous kids on their way to school. She reckoned it might just smell the same as it did back then though. The brisk assault of river air never really changes, does it? She missed the sunflower fields more than ever.

Michael had been driving the 44 up and down Charlton Road to Greenwich for going on twenty years. He’d taken the job when his daughter was just about toddling, and he knew the route almost as well as he knew what the freckles on her nose looked like.

He always felt he’d let himself down when he drove past his great-grandfather’s house. English Heritage had decided that William Henry Barlow had done well enough in life to posthumously get himself a blue plaque. So every day Michael drove back and forth past that blue plaque and his great-grandfather’s white villa. Three generations later, and he’d ended up with a red-brick terrace further up the road. And a red bus.

Amelie spotted his bus on the other side of the road. It was her bus, and she couldn’t be late for rehearsal. Not today.

Nothing surprised him on his route any more. Not the bends in the road. And certainly not the way the sunlight fell on the red wooden slats of Poplar Cottage in the spring. The seventeenth-century cottage looked so out of place on the busy road. But he was used to it now, just as he was used to the twinge of inadequacy he felt when he drove past his great-grandfather’s house this morning. But one thing did surprise him today. And it surprised him too late.

Somewhere behind him, a baby cried. The shrillness was vivid; it beat his eardrums like a symphony. It was all he could hear as he stepped from the bus. Was the engine still running? He didn’t know. He could feel his own hands at his side. They were the only things that were real now.

Amelie thought of Mahler’s 9th and the sunflower fields. The petals on a sunflower are the same shape as the windows in St Pancras, you know, and the man who built it had lived just there. Such blinding clarity. Everything so real, just for a moment. Yellow and red and blue and a soft, soft humming. Her mother kissing her on the cheek before school. She closed her eyes.

He looked down and saw her. A beautiful young girl about the same age as his daughter. Freckles too. But her head was the colour of the bus. A violin lay splintered on the road, and leaves of sheet music whipped in little whirlwinds like hellish tumbleweeds in some fucked-up Western. Delicate white hands with grazed knuckles gripped a book: The History of St Pancras Station.

And then, nothing on Charlton Road moved.

When the time came, he knew what he had to do. So he stood on the bridge and knew he wanted to be there. For a while he’d thought about visiting the Clifton Suspension Bridge. His great-grandfather had built that too. So it made sense to him, you see, since she’d been reading about St Pancras. There was a pleasing synchronicity in that which somehow seemed more correct than anything he’d actually done in the past 57 years. But there was also a pleasing synchronicity about Charlton Road, and so he stood on the bridge this morning.

So he stood on the bridge, and knew that’s where he should be. It was far too early to be out in the cold, but it didn’t matter now, and it still felt right. He looked down at the cars below. And further along too. Down to the Docklands, and along the Thames. Everything was right today, and he smiled.

He’d always admired the speed of London. But sometimes things moved too fast. He knew that now. The years, on the other hand, had moved too slowly since that day. But he’d be quick this morning. He couldn’t be late – he’d never been late in all his 22 years on the buses. Not yet.

Everything was so real, just for a moment. Yellow and red and a blue plaque on a white villa. The soft, soft humming of the traffic below and his mother kissing him on the cheek before school. He smiled again and closed his eyes.

Nothing moved on Charlton Road. 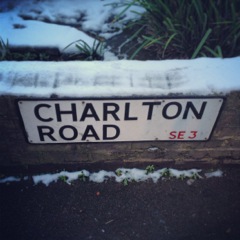