This evening at bath time Amy asked what I do all day.

“That’s a good question,” I said. She’s only four and has just realised people do things when she’s not there. “That’s a very good question indeed.” I didn’t answer.

“Daddy’s a very important man in The City,” my wife said, pulling the plug.

“That’s right,” I replied. It was all I could say.

Two months on and I still haven’t read the pack they gave me. The one with smiling people on the front and page after page on next steps and new opportunities. I worked there for twenty-five years and that folder was all I was allowed to take away with me.

They even made me leave my BlackBerry. It didn’t feel right, not having it in my jacket pocket. And my wife would have noticed straight away if it wasn’t by the bed.

So I bought my own one on the way home that evening.

The money finally came through. It’s going to be alright.

I’ve started working my way round the benches in Cabot Square. There are 45 in total, so I won’t get back to the start for well over a month. You can’t see them from the street either, so there’s no chance of being spotted.

Most days I’m there at 9, earlier if it’s ‘a busy week, darling’. Last week I left the house at 5.30 one morning to ‘close a deal’. The rush I got just saying that! And the thrill of the tube before London wakes up was worth the early start – empty carriages and Metro’s ink barely dry.

Turns out Cabot Square doesn’t open that early. But I was the first one in when the caretaker arrived. 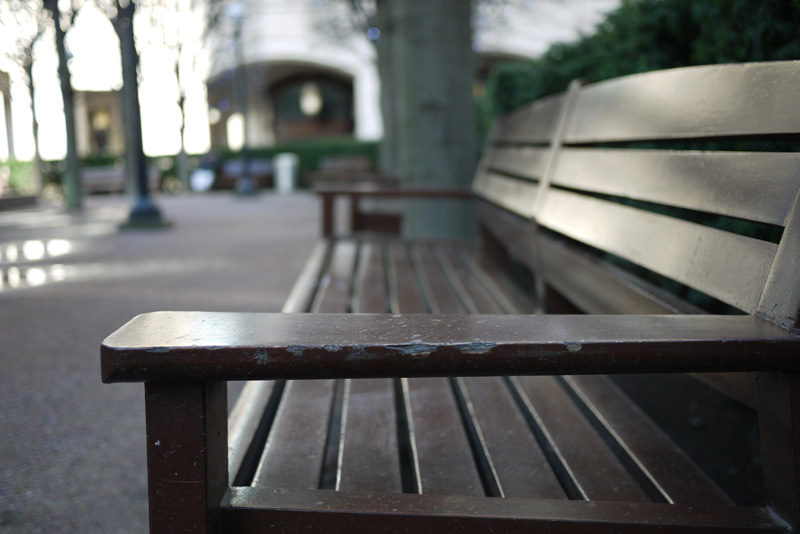 I spent my lunchtime queuing in Tiffany. I know, I know. Another necklace is the last thing my wife needs. But I wouldn’t have a clue where to start if I didn’t go there. And the sales assistant remembered me from Valentine’s day, so the necklace will match the bracelet that matches the earrings. It’s the least I could do, considering.

Every tree in the square is decorated with tiny twinkling lights. When it gets dark, you can see them reflected in the glass buildings.

I don’t remember noticing them from the inside. Or maybe they weren’t here last year?

Tonight is my Christmas party. I came in extra early ‘to make sure I could get away on time’. And now I’m in All Bar One with a bottle of Merlot.

It must look odd, a man sitting alone among crowds of forced conversations, unbuttoned collars and freshly applied make-up. But soon everyone will be too drunk to notice, and I probably only have to stay until about 10.

You can do that, when you’re a parent. You can make excuses. Leave before the end.

No one will argue, because family comes first and ‘a healthy work/life balance is encouraged’. But the truth is, no one cares if you’re there or not. The party goes on.

As usual, we had the same argument about taking more time off around Christmas. As usual, I explained it doesn’t work like that in The City. The deals don’t stop, so I can’t either.

It’s nice to be back in the square after the suffocating heat of my wife’s parents’ house. 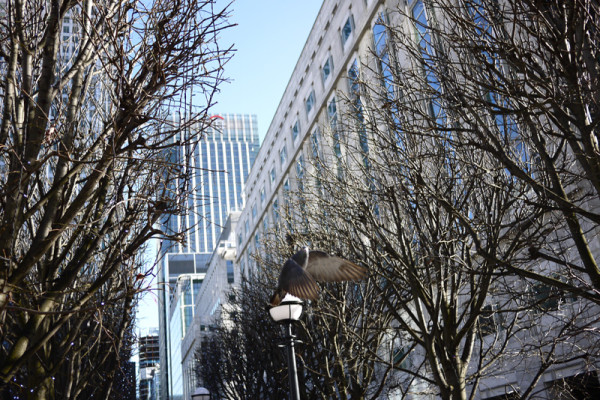 Cold day today. I managed to stay in the square till lunchtime, then had to walk around the shopping centre for an hour or two. I went for a suit fitting and bought a new pen.

Today I saw Sheila from HR. She was smoking in the alcove round the side of the office; all high heels, thin blouse and blue eyeliner. I don’t think she saw me, but I don’t care if she did. I’m allowed to be here, whatever her budget cuts say.

The folder she gave me is still in my briefcase. Is there any point reading it now?

Amy’s doing her five-metre swimming badge today. I would have loved to have been there, but working weekends is just part of the job. My wife understands, and Amy will too one day. 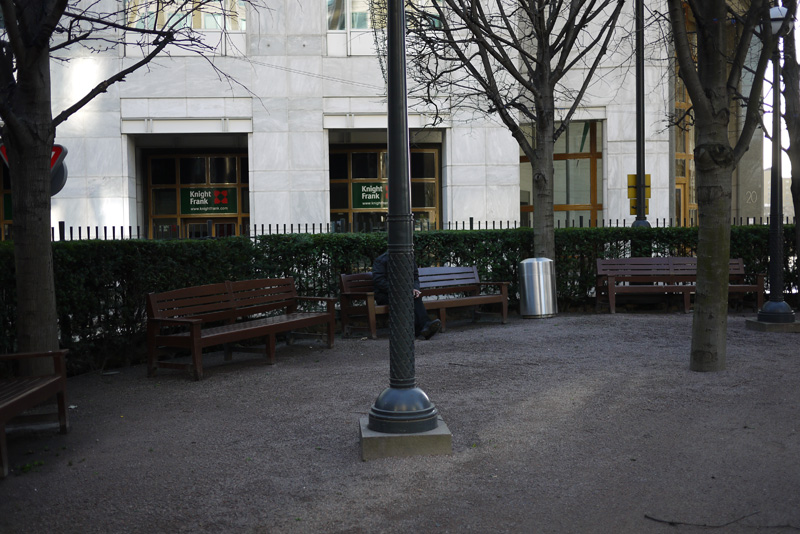 Cabot Square is most beautiful at the weekend anyway. No one hurrying to meetings. No frantic phone calls to overhear. Just the rushing of the water down, down, down over the steps of the fountain. And the seagulls from Billingsgate, squalling above.

Today an odd thing happened. I was sat on my bench, checking my emails, when I felt the square’s caretaker watching me.

He’s always here somewhere, picking up crisp packets with his pincer or trimming the hedges. But we’ve never said a word to each other. Why would we?

Today he was scraping leaves into shiny blue sacks.

I looked up. He had a bunch of brown leaves, all squashed together between giant claws. At his feet, a fresh blue sack had crumpled, making it impossible to see where it opened.

I glanced around the 45 benches. Up at the towers. Across the road to the coffee shop, packed with navy suits and slicked-back hair.

No one knew me. No one was looking.

I picked up the bag and held it open. It was the first useful thing I’ve done in months. 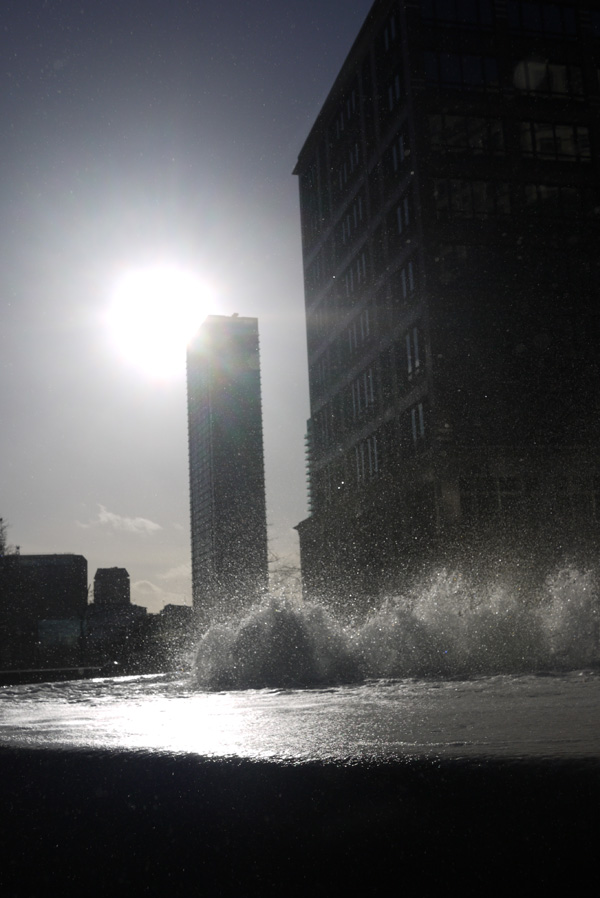 Today I went to work without a suit on. I told my wife it was a team-bonding day, but I don’t think she believed me.

No one goes to work in The City without a suit on, no one. My time is nearly up.

A late snowfall has been forecast, so we spent the morning sprinkling orange salt over the steps. Smart shoes, polished granite and glassy ice don’t mix well.

I’d never realised someone does this.

What did I do before this happened?

Spring in The City. Striped shirts, still with creases from the pack. Lighter evenings, later meetings. Red and yellow nasturtiums bravely shivering in the square.

Planted, potted and watered, by me.

Amy asked me again last night. What do I do when she’s at school?

I thought of the flowers. The grit. The BlackBerry I haven’t switched on for months.

“I’m a very important man in The City,” I answered. 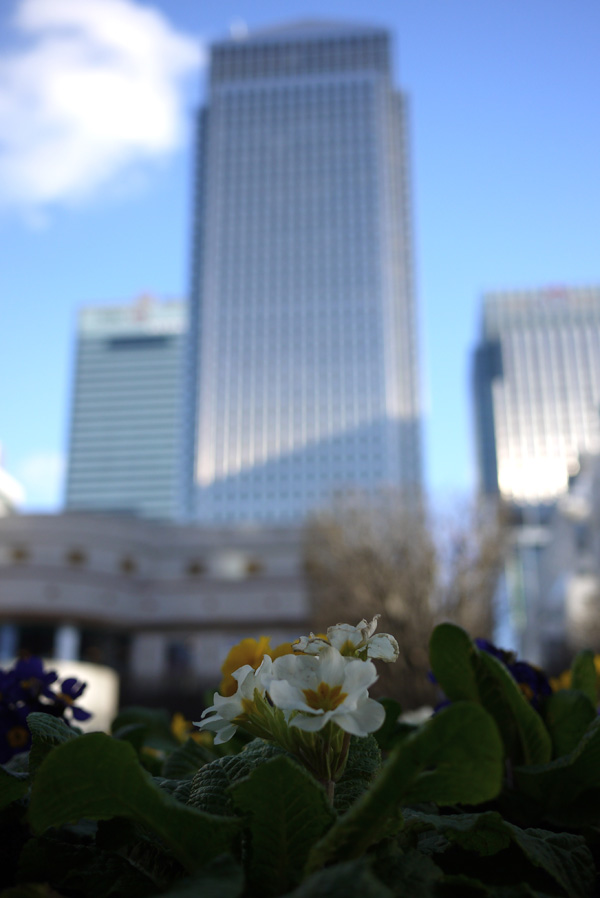