Words and images by by Rishi Dastidar

I am looking for.

I am looking for someone.

I was on a boat, and then there was a tower.

The Tower, is it?

I got off the boat.

I got off the boat and someone, someone told me to go east.

I am Wilfrid Michael Voynich.

Is this the busiest street in London?

Is this going east?

I must go east.

This is ironic. I have come from the east.

But not Hamburg here. Not now. London. It had to be London.

I have no coat. I have no glasses. I had to buy bread and herring. In Hamburg. And ticket to London. I sold my coat. I sold my glasses.

Now I am here. And I have to go east. Again.

I am looking for.

I am looking for a man.

I cannot tell you the name of the man I am looking for.

But I have it. I have it on piece of paper. 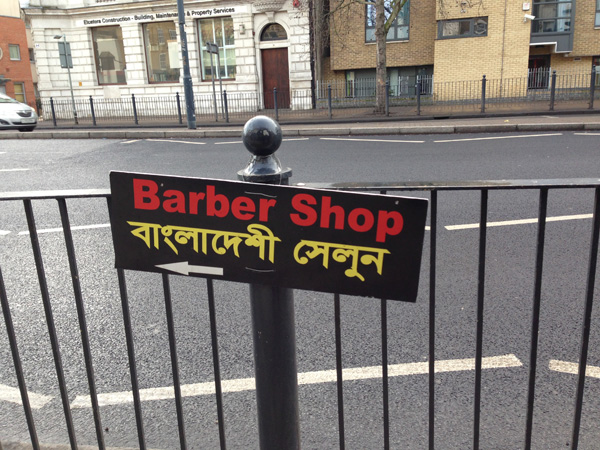 He comes from the east too.

He is man of the Steppes.

We used to breathe the same air.

We still do breathe the same air.

We breathe the same air of ideas.

Fragmented, dangerous, exciting ideas. Ideas. Ideologies. An ideology. Breaks structures. Breaks rules. Disobeys. Wants to charge into the future, destroying all that comes before it. All that has held us back until now. All rulers. All monopolies of violence. All apparatus of the state. Everything that impedes progress. That stops the modern world emerging, the world that we deserve to live in.

The world where we will be equal.

He believes this. I believe this.

I must find him. To help him.

Help give birth to this world that we believe in.

This modern world we will live in.

I must find him.

Is this the busiest street? The commercial street?

It must be. I have never seen a busier street. This commercial road.

The world is on this street. The modern world that we want to build.

There is everything on this street.

My eyes bulge at the everything on this street.

This street is living up to name.

There is commerce everywhere. Look.

There are shops, selling every victual. Not one shop per victual. One shop with all the victuals you could imagine.

There is a shop with ‘river habitats’. Selling the river! Everything is always for sale.

There are some things about this world that I am not sure about.

There is place with glass walls – glass walls! How do they stand it? Everyone looking at them. The place says it has classes and workshops and platforms. And it is called ‘Departure’. 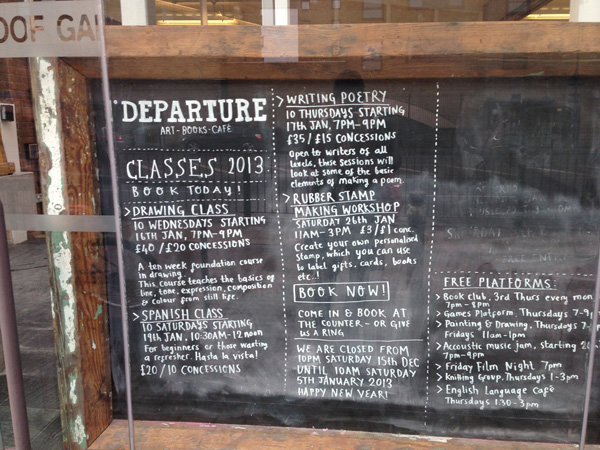 This is confusing to me.

The right sort of confusing. The confusing that me and the man from the Steppes want to bring to the world. To bring to you.

I think there are jokes here. I have heard of your famous John Nash. The architect. And he has a building here named in his honour. But it does not look like any building he ever built. 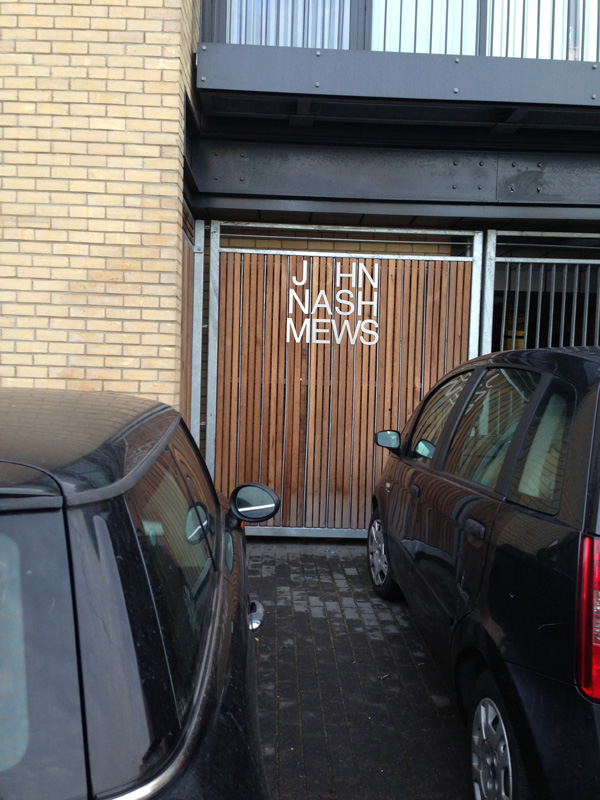 This is anarchy, no? Look, his name is even wrong. ‘J hn Nash Building’ on a building the famous John Nash didn’t build.

Our words, our ideology will fall on fertile ground now, I am sure of it.

And how fertile the ground is. The water too. This water on the canal named after your regent, is green. A bright green, I only ever saw in the spring in my homeland, for a week. When the rain came and made the world shine in the sun. Before we saw things starting to grow.

There are farms on this street. There must be. Or why are there the fountains and the cattle troughs for cows called ‘Harriet’?

In my world, in my new world, I will be destroying this authority too. This appeals to the sad-faced man. We must appeal to the rational, not to the myths.

But I think these myths will be hard to challenge. Hard to change.

On one side of this street is a church. A church for Saint Anne. A church built by a necromancer. This Hawksmoor. I think we claim him as one of us. A church for favour and grace. Whatever they are. We will have to make them mean something in this modern world that we shall be building.

But then on the other side. A pyramid. A pyramid of fat rings of some texture that feels like skin softened and hardened in sea spray. A pyramid of constructed to pay homage to a god from the subterranean world, it says, a god called ‘Louis Smith’. 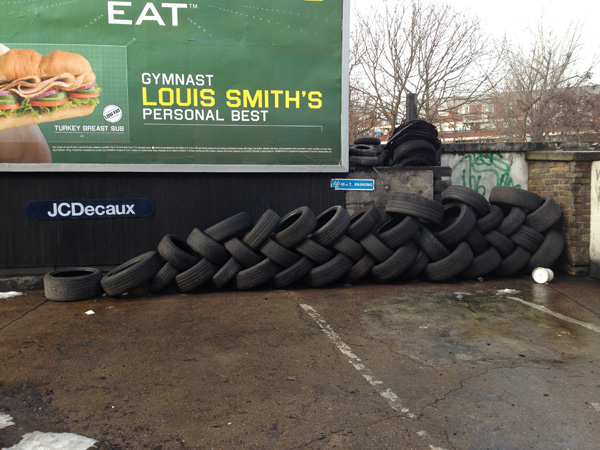 He must be a powerful god, this Louis Smith god.

I have a mission.

And outside it. I see Debord. I see de Jong, Jorn, Katya Lindell, Kotangyi, Jorgen Nash, Prem, Sturm, Maurice Wyckaert and HP Zimmer. They are in a situation.

Let me call them great great grandchildren. My descendents, in zig-zag lineage. They are saying anarchy as situation. Rebellion as play.

I approve of this field of encounter.

I am harvesting a never-ending fields of encounters.

And men pass me. Men trailing anchors around with them. Dragging them.  Black hooks. Steel spars. 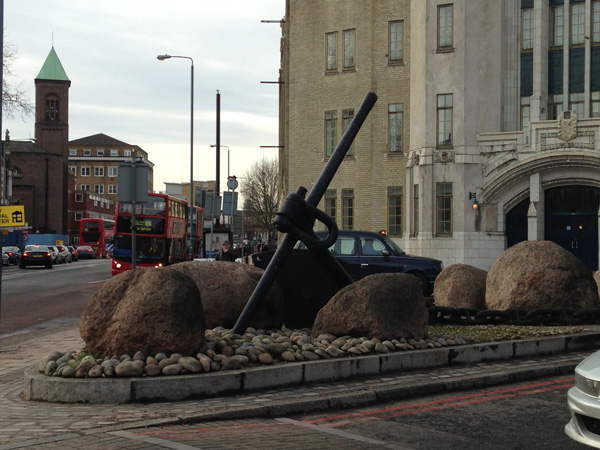 What a weight it is for a man to carry a metaphor with him. To live with it for all his life. And they do.

There are policemen here. I must hide. I rub against brown brick buildings with the texture of towelling.

But no. They are asleep. They must always be asleep in our new world.

There are dragons. Chinese dragons here. How much further east must I go? Paper dragons, swooping up and down on a roundabout in the sky. A totem that doesn’t move. That defies the sky to quench its prongs of fire.

I am on the heritage trail. It is taking me back to China. On a ship, with a Buddha’s head on the prow. 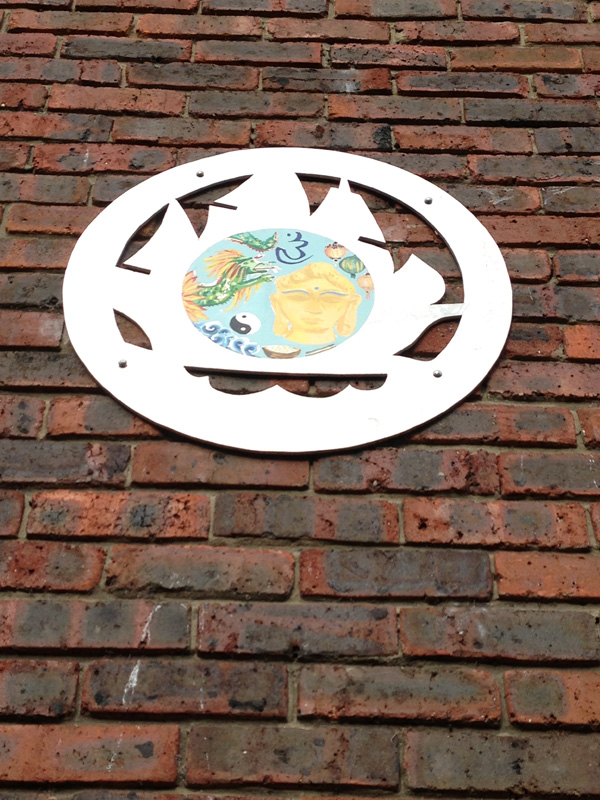 This, this my friends, is the anarchy I want.

I hear a deep gurgling. A whooshing of water. A black ditch below rushing in the opposite direction.

I am blind. I am blinded by the sun setting behind me. It bounces off towers and citadels. Canyon walls. Square-eyed giants squatting over the waters.

Maybe there will be anarchy in those too.

There is another totem. Another plinth. A white horse astride it. Above the ground. A knight’s horse. Riderless. 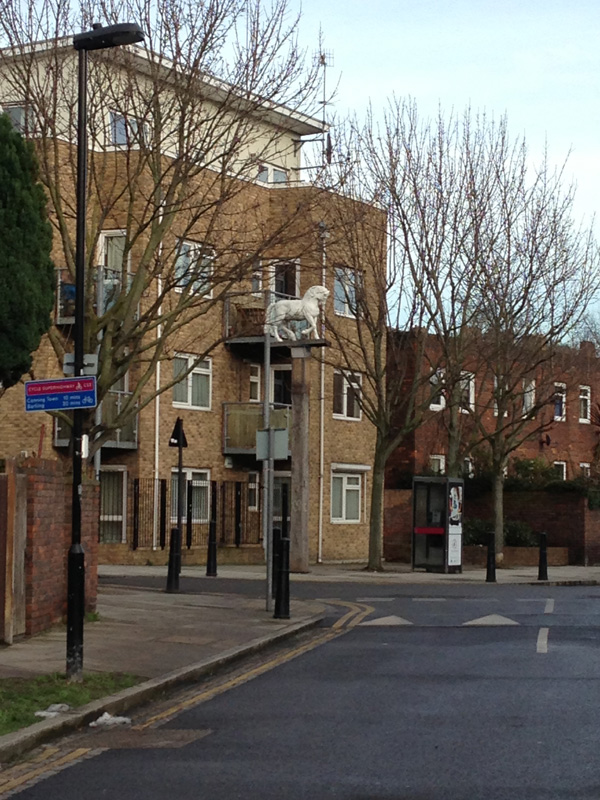 You. You are standing there. Beside it. Maybe you are a knight. Maybe in this new world, this world of me and the man from the Steppes, there will still be room for knights. Some honour remains in the rubble and the freedom. Some who follow rules. Even though they have permission not to. To follow, because it is natural. Sometimes.

I press the piece of paper into your hand. Your fingers unfold it. You look. At it. At me. You smile. You nod.