The Highway stretches ahead for a mile. An urban carriageway of a road, with two lanes of cars on either side, speeding east and west. God, you think to yourself, this is awful. On foot, walking or running, it’s a road that depresses the spirits.

I walk along it, hoping to find places and people of interest. There’s a riverside park to the left, further along a Hawksmoor church; otherwise it’s local authority flats, industrial units and brick walls. As for people, there aren’t many to be seen. It’s a road deserted by pedestrians, land ceded to the all-conquering motor car.

A song comes into my head and I recall that once this was Ratcliffe Highway. Fairport Convention once sang The Deserter, a Victorian folk song that began “As I was walking along Ratcliffe Highway…” It’s a tale of a young man press-ganged into the army, a serial deserter who was finally rescued from hanging by none other than Prince Albert. It’s a rousing song; I hum it to myself as I walk along. If you’re running along here in the Marathon, it’s a good one to listen to or sing. It might lift your spirits at a difficult time.

At the end of the mile, I turn into St Katharine’s Docks and I sit in the Dickens Inn wondering what I could write about. There’s a marina outside with luxury boats for rich City people. The pub has the merest veneer of being historically linked to Dickens – it reminds me of his characters, the Veneerings, in Our Mutual Friend. What would Dickens make of this place? Or, more to my personal point, what would Jim Knott make of it? My recently mourned father-in-law Jim worked in the docks at St Katharine’s and the London Docks in Wapping, back in the 1950s, 60s, 70s. Since then prettification has swept in on the tide. 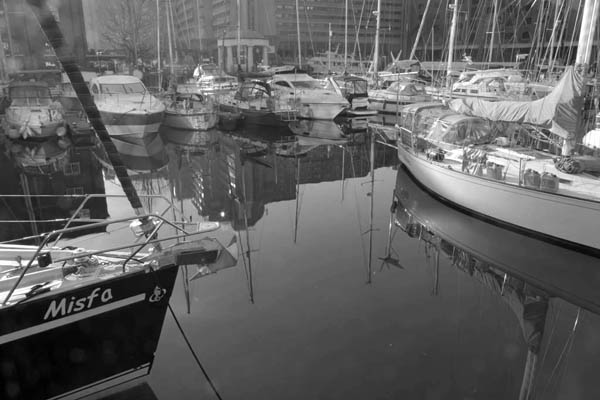 I head back into the old docks area between The Highway and the river, just to your left as you run Mile 22. Here in Wapping there were working docks during my own lifetime. Now all that remains of the dockland life are street and building names, wharves converted into upmarket apartments.

Ersatz is a word with enough ironic resonance in its origins to describe what is happening here. The tide of property profiteering has washed away any realistic sense of the past. History hangs on nostalgically in enamelled and painted place names on the streets: Cinnamon Street, Tobacco Dock, Gun House, Vinegar Street, King Henry’s Stairs, Oliver’s Wharf, Pierhead Gardens. It seems close to a betrayal, a desertion of the lives and memories of those who once struggled to make a living here. 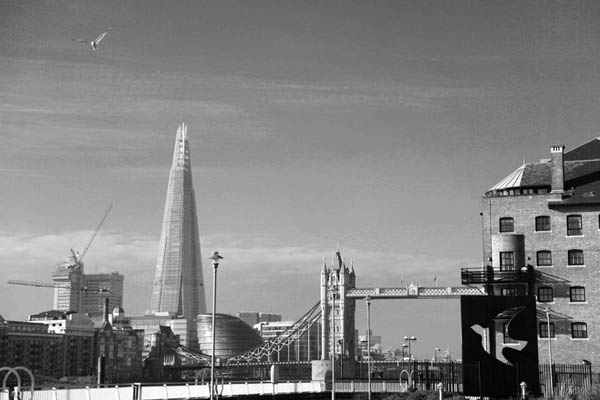 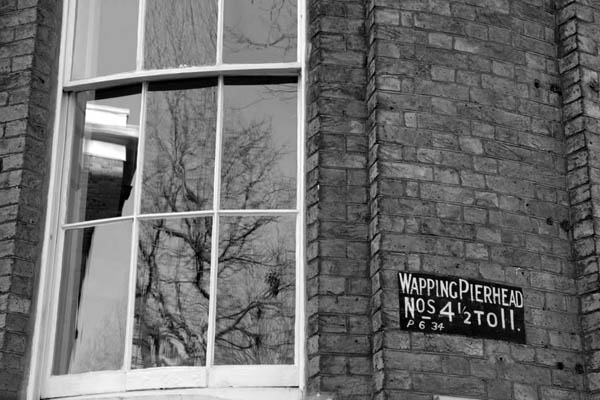 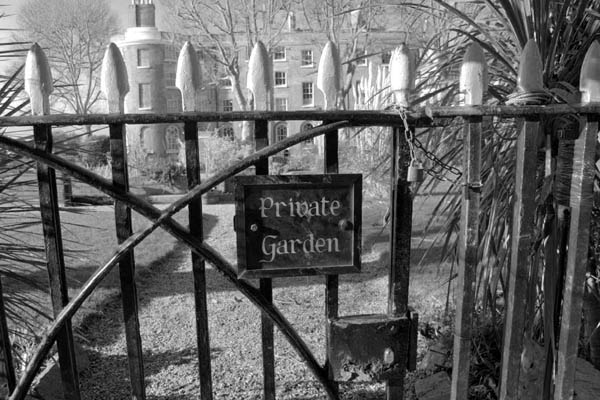 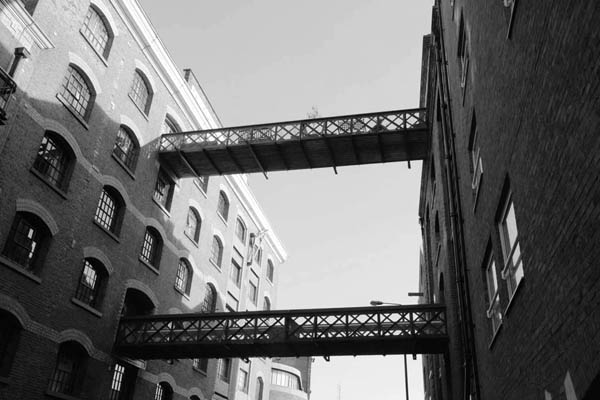 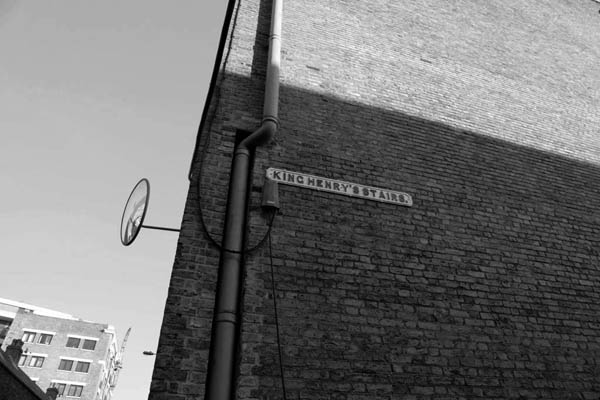 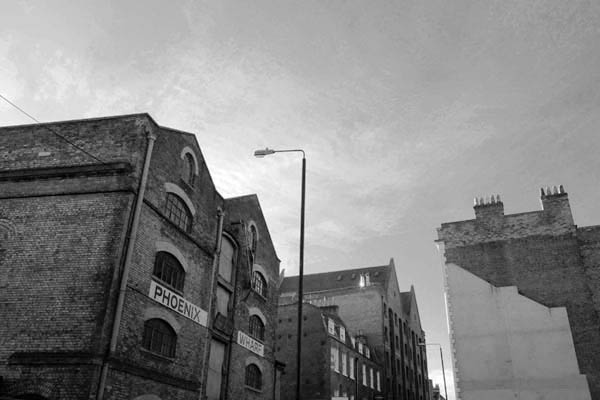 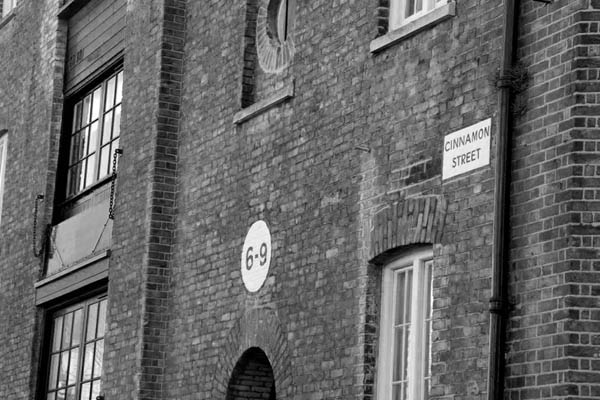 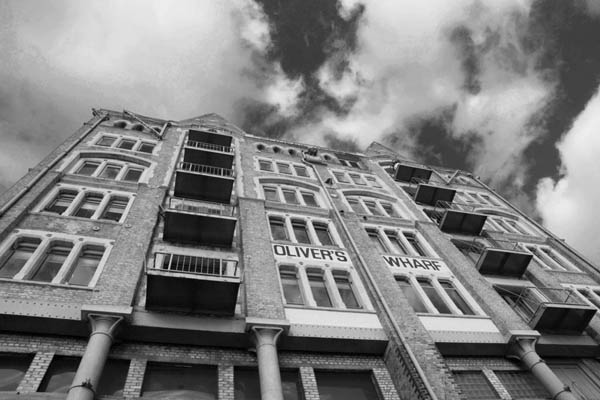 But, hey, what can you do? I’ve no wish to be a progress denier, a romantic standing on the refuse-sodden shoreline. After all, here you’re just a bobby’s beat from the scenes of the Ripper murders and, fifty yards north and parallel to The Highway, is Cable Street where ordinary working people pushed back against the advance of Mosley’s blackshirted fascists in the 1930s. 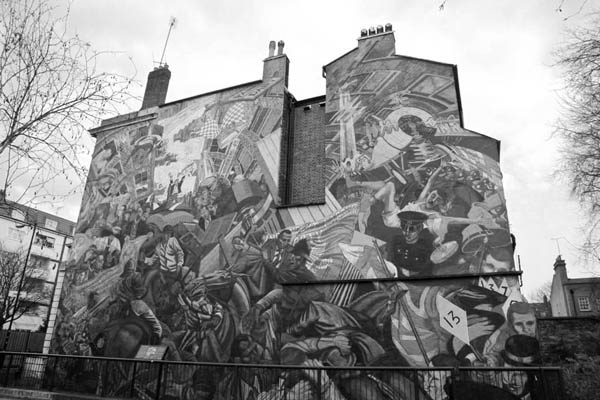 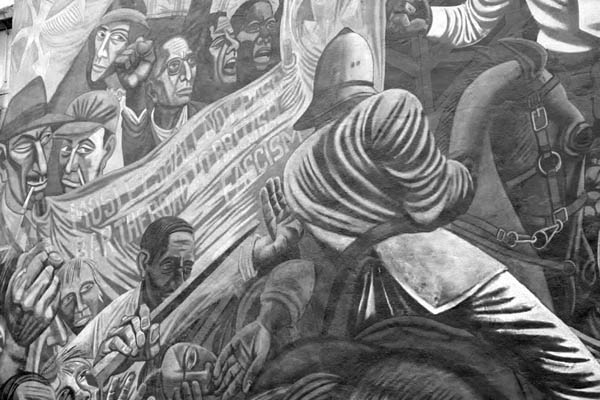 That’s why the anodyne nature of today’s Highway offends me. It’s a desertion of the life that once existed here in a rougher, tougher form. The Highway’s now a road designed to get you through and past the area as quickly and thoughtlessly as possible. But let’s take some time to think, let’s wander off this fast track past our history. Because you have to respect history; otherwise you abandon to oblivion the lives that people have led. People like Jim Knott.

Wander left into Wapping again, try to connect with the past. This is Jim Knott talking to his granddaughter Jessie on film:

A thing we used to do as kids. When there were stalls in Bethnal Green Road, at that time we didn’t have shops like we have now, it was all stalls, open stalls and when they packed in at night the kids used to go rummaging along and find ha’pennies and pennies in the gutter which when they were serving might have dropped down and also any bad fruit was thrown out and it would be there in a pile to be thrown out as rubbish. But we as kids used to go and get pieces of wood, crate wood, what they call a specked apple, cut out all the bad and eat the rest of the good. That was a way of life.

Wandering into Wapping, there are gravestones in a small park, lining the brick wall. Stop and read them, the life spans of people who once lived here. Look at the former school, founded by subscription in the seventeenth century. Take in the wharves and think how they would have looked, sounded and smelt a century earlier. 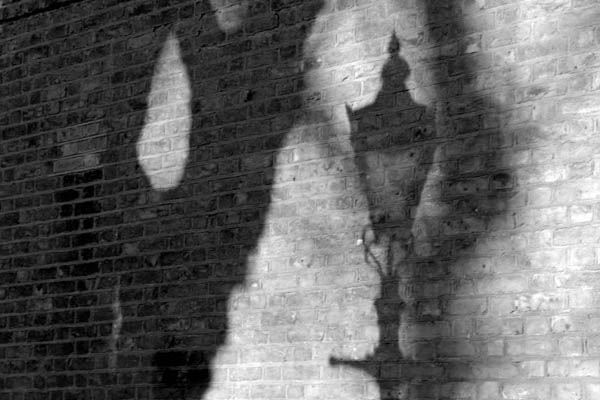 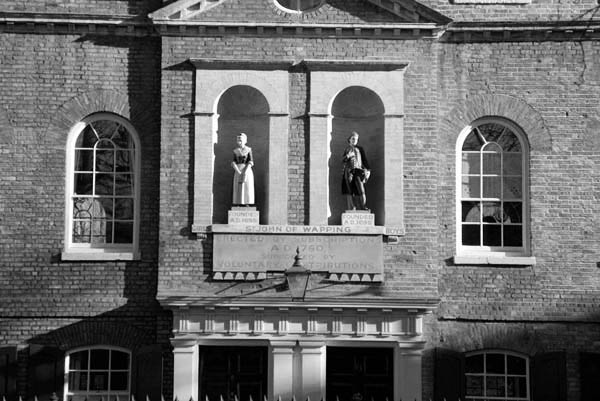 I’m with my daughter Jessie who’s taking photos on a freezing but sunny day in Wapping. Strangely, even in bright sunshine, there’s a misty feel to the light. By the side of the Town of Ramsgate pub you can walk down the Old Stairs to the river shore. It’s a shock to do this in London where the river flows without seeming to touch the sides of people’s lives. But here you can touch the river (though, health & safety warning, I wouldn’t advise it). And at low tide you can stand on the muddy, stony strand with the washed-up jetsam of the Thames at your feet. 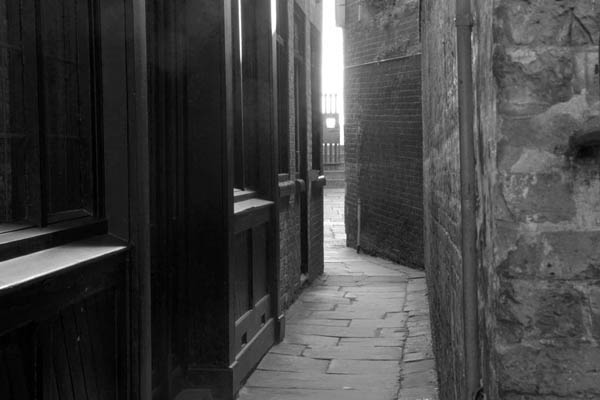 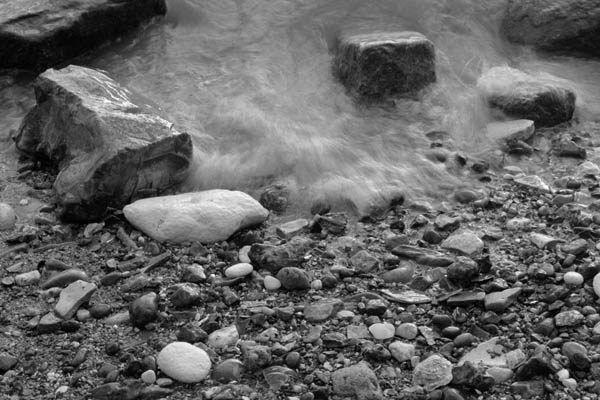 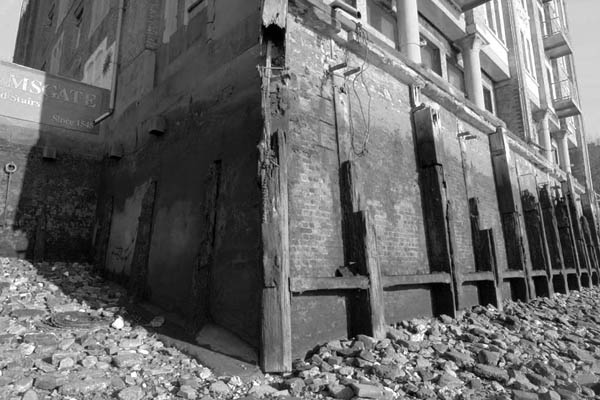 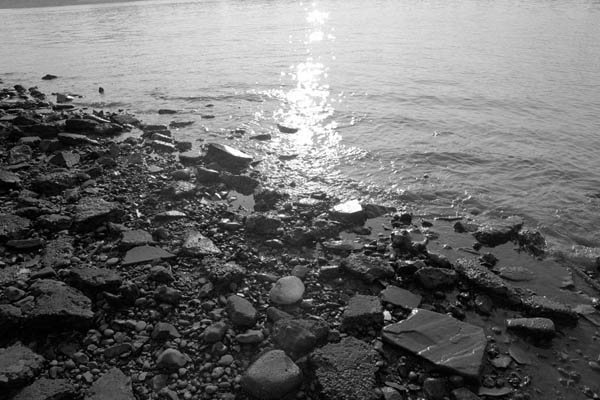 It’s not a place to linger. But what it does is put you closer, in real touching distance, to the reason for this city’s existence. The river is not decorative, though the views can be spectacular, to Canary Wharf and the Thames Barrier one way and to Tower Bridge and the historic city the other. Here, this jetty, this muddy pierhead, these stairs, are where the world’s riches arrived to sustain the lives of a living, trading, eating, drinking, loving, smoking, squabbling population over many centuries. And now we run past it, not really noticing, unless we have a reason to visit this islanded enclave, left behind when the waves of industry rolled on, a shore deserted by those whose money is no longer invested in the warehouses that once stored and grew their wealth. That river has flowed past. 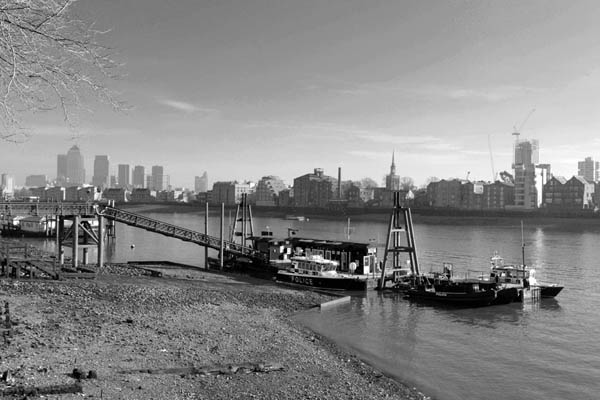 On another day here, a day without sunshine, a day with the mist rising and falling like a stage curtain, it seems to me that the layers of family history are strangely clearer. I walk as an intermediary between my daughter and her grandfather. There’s fog up and down the river, swirling through the narrow lanes of Wapping and today the river views are limited. There’s fog on the Essex marshes and fog on the Kentish heights, a memory of a Dickens’ novel, there’s the echo of a long-gone tug boat’s siren, a fleeting glimpse of a ghost from your family’s past. The mist seeps out, winding round corners of the buildings as if from a dormant dragon’s smoky breath, wafting wreaths of fog in and out and through the crevices of the brickwork and hardware of the reimagined wharves. 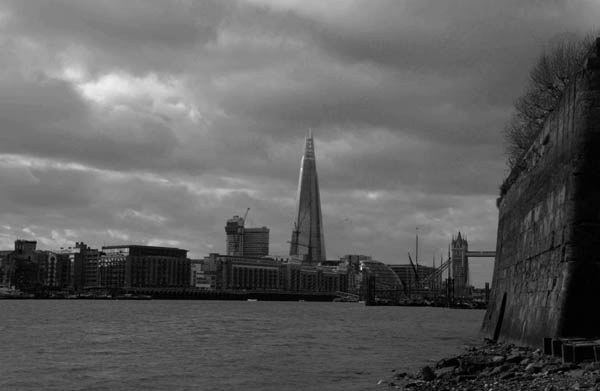 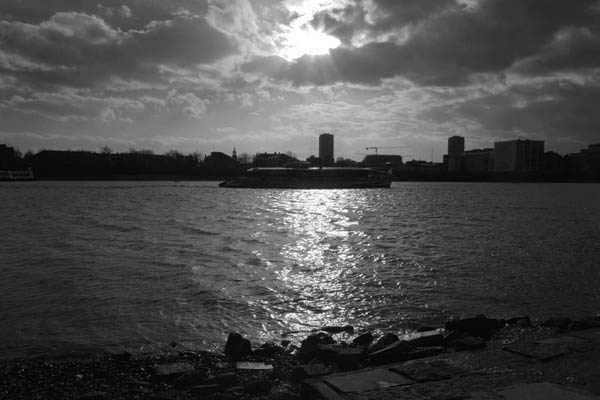 A handful of years earlier Jessie filmed her granddad as he told stories of his life. This was a way of life. We noticed this repeated phrase afterwards, when he had died and only the film remained. Jessie called the film Bloody Blimey! because that was another phrase he had, particularly when faced with a new example of technology or progress. He told stories of working in the docks, these docks, and having to fight to earn the right to a day’s work. We hope you’ll take a look at an extract from Jessie’s film and hear Jim Knott talking about the docks as they were then. And think about how this film still makes a connection with you, between then and now. Underneath it’s not that different, if you scratch just below the surface.