Wednesday April 24th, 7:08pm
At the head of the line is Martin, one of the senior boys. Then Sam, who was born exactly 100 days before Jamie. Then Lee. Lee is new. Jamie remembers the first time Lee’s name appeared in the roll call – like a gravy stain in the middle of a clean school shirt. He’s used to it now.

The Detachment Commander is talking about community. Jamie is usually apprehensive about new projects. But this one is something to do with old people – and Jamie likes old people. They don’t shove or fight, all swinging limbs and scabs. They don’t speak too loud. They often have mints.

The Commander wants to know: who else?

Jamie raises his hand. Behind him, a boy guffaws.

Jamie smoothes his tie, and shines the toe of his right shoe on his left trouser leg. Although his uniform is exactly right, he feels very different to the other boys in the hall.

9.02pm
Jamie leaves the Detachment. Other boys hurtle past, heads bobbing beneath the razor-wire, voices ringing like pennies rattling down a drainpipe.

Jamie passes the Spice Rack, which ‘specialises in balti and tandoori’. This is Jamie’s favourite building. He likes the juxtaposition: two storeys of crumbling red brick, scrolls of faded, faux-Georgian glamour, perched on top of the black plastic sign with its ketchup-red shutter. Jamie thinks both parts are right in their own way – you just wouldn’t think they go together.

He doesn’t notice the plastic bottle arcing across the road and swooping toward his cheek. He hears shouting, laughing, and the sound of pounding feet before he feels any pain.

Saturday April 27th, 12:29pm
Was that the doorbell? Damn thing, Bill can hardly tell. Either the batteries are going, or it’s his hearing aid again. He leans like an old battleship, one hand on the woodchip as he moves down the hall. Opening the door, he comes face to face with a stiff, pale boy of about twelve, thirteen.

Bill raises his wiry eyebrows, then smiles. He notices a woman in a parked car, twisting a strand of her hair. Must be mum. Bill nods subtly to her, not wanting to embarrass the boy by acknowledging his chaperone. He turns his twinkling eyes to the boy.

Bill waves to the woman as he closes the door.

‘Looking at me now,’ Bill says, hovering around the toppled wall, ‘you wouldn’t believe what good nick I used to be in. A runner, I was. Long distance. You like running?’

Jamie works, taking pieces of brick from the bottom of the garden to the skip. Bill notices that, even when he can carry more, the boy only ever takes two at a time.

‘I once ran the London marathon in three and a half hours. These days, I can just about run a bath, hey?’ Bill chuckles. He savours the sensation of talking. Or of someone listening.

After an hour, Bill tells Jamie to come inside and have a rest. He encourages the boy to sit in the comfy chair by the window, and proffers a plate of clumsily-arranged biscuits. Odd as the company is, Bill is glad of it.

Bill explains that he doesn’t have family nearby. His son, Paul, moved to Australia, and now has a family of his own on the other side of the world. They speak on the phone, sometimes. A lot of Bill’s friends have died now. Jamie mainly says yes, no, and goodbye.

Monday 13th May, 8:23am
Jamie’s mum pulls up outside the shop that used to be the Queen Victoria – budget-newsagent-base, crowned with two bemusing floors of mock-Tudor monochrome – and goes inside.

From the passenger seat, Jamie notices Lee, the most recent addition to the South East London Army Cadet Force. He’s running down the pavement with some boys Jamie doesn’t recognise, howling and jostling.

How many friends do people usually have? Three? Four? Forty-four? And how do they even go about finding friends? Jamie knows he had a friend at Sunday school once – a boy called Charlie – but really, they were only friends because their mums were friends. Charlie used to hide Jamie’s mittens, and Jamie used to flinch at Charlie’s filthy fingernails.

It’s not easy for Jamie to think about. He finds it easier to imagine a network, a grid stretching out behind his eyes. He imagines having five friends. If they all had five friends, including him, he’d have twenty friends-of-friends. Twenty five people altogether. Count the friends-of-friends-of-friends too, and you get to a hundred and five. Jamie pictures each as a glowing dot, golden links between them. A hundred and five. Jamie imagines that’d be enough people for a very successful birthday party, or a barbeque.

As they drive down Hillreach, Jamie thinks he might have spotted Bill: a single dot in his window, sitting in his too-hard armchair and gazing at the outside.

Monday 20th May, 5.29pm
‘I didn’t expect to see you today,’ grins Bill, squeezing the life out of a Yorkshire teabag. ‘I thought you’d be out playing football, or something.’

‘Not today,’ says Jamie, fiddling with a spoon. He talks more these days. ‘Bill, when you were at school, how many friends did you have?’

Bill rubs his bristly chin. ‘Oh, I’ve no idea. There was a gang of us, used to hang around the old school rugby pitch. Maybe fifteen, twenty of us.’ He pauses. ‘Do you have a best friend?’

Jamie wonders if he should say Lee.

Bill puts an extra sugar in Jamie’s mug, and cuts him a very big slice of lemon drizzle cake.

Saturday 1st June, 1:26pm
Bill is frequently surprised and amused by his visitor. Today, the two sit outside in the garden on plastic garden furniture, with glasses of strong orange squash.

‘Were you good at school?’ Jamie asks.

‘I was good at getting into trouble,’ Bill winks. ‘Not like you, I hope?’

Jamie thinks. ‘I don’t get into trouble with the teachers, anyway.’

Bill smiles, and stretches out his slippered feet.

Jamie asks: ‘Why don’t you go to Australia and live with your son?’

‘Australia? Oh no! There’d be nothing for me to do. I’d get under everyone’s feet. Besides, it’s too hot. And they have big hairy spiders that wouldn’t agree with me at all.’ He refills Jamie’s glass.

‘Have you ever been?’ asks Jamie.

‘How much is a plane ticket?’

Bill is silenced. The numbers, so deftly handled, take his breath away. Christ, what a world. He feels small – like a minnow at the end of an endless, winding fishing line.

‘These days, it might take me a bit longer,’ he murmurs.

For a while, neither speaks.

Then, Jamie: ‘I overheard my mum say to Doctor Fryer that I sometimes seem far away. As if she can’t reach me.’

Bill turns to the boy. He wants to hug him like he would hug his grandson – a child, distant, desperately missed.

Jamie continues. ‘I thought that was odd, because I was only in the kitchen at the time.’

Bill stops, then flings back his head, creasing his leathery cheeks with laughter.

‘Jamie,’ he says, wiping his eyes. ‘You’re a very special boy. I bet your mum is very special too. Stay close to one another, and you’ll be OK.’

On the way home, Jamie thinks about what Bill said. He isn’t sure what he’s supposed to do. But he takes his mum’s hand, and squeezes it. As she squeezes back, her eyes shimmer. 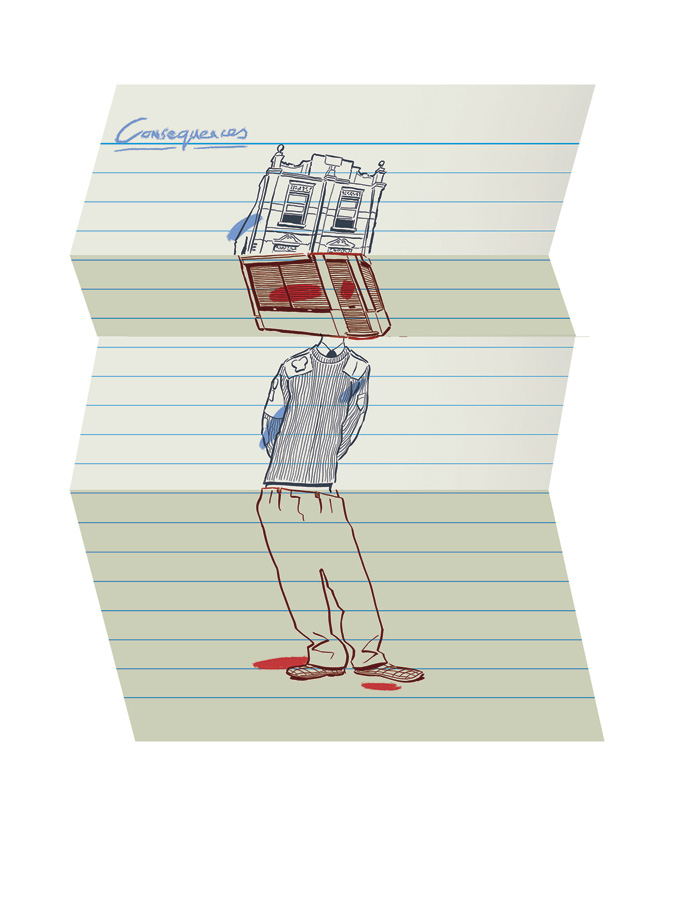