Words and images by Roisin Clarke

“He that loves pleasure must for pleasure fall.” – Christopher Marlowe

They sometimes call a hangover a ‘beast behind the eyes’, but this one was different. This time, it felt as if one had stretched out and forced a claw into my right socket.

“Marlie,” Evelyn mumbles somewhere near my ear. “You awake?” I shift onto my side, knee the wall, and jerk backwards across the mattress. “Unnnggghhhh.”  My tongue broaches the subject of wine-gummed lips.

“Keep still a sec.” Her voice is replaced by a jostling sound and a descending chill. Bagged ice gently nudges puffed brow bone. Returning to sore consciousness, all I can think is: Whatever’s been at my face, it bloody hurts.

I retrieve my left arm from beneath the pillow only to have it flop, numb and useless, across my chest. All the while, the pain beats beneath the heat-throb of the ice and against the monster circling my eye. Keeping time, I clench life back into my hand. Sunlight stripes my torso and a mower buzzes across Sayes Court Park, three floors below.

Here it comes: That familiar rise to reality and drop into doom.

This is what I remember….

It’s the usual booze-soaked Friday night. The Overground sicks us up at Surrey Quays and spews us into the chicken shop.  A short while later, Will emerges triumphant with his greasy-boxed bounty and performs one of his pavement-kerb-bus-lane shuffles. Twisting into position, he holds the pickled cucumber aloft between thumb and forefinger, rocking on scuffed heels to get the angle right. The light-flecked skyscraper, near-black against the night sky, seems to mock Lower Road. “Shall I compare thee to an… architectural monstrosity?” He hisses, before he sensibly gives way to the 47 to Catford and re-mounts the pavement. I groan, turn my back on Will and his gherkins, and make for home.

A breeze nips out to greet us from Deptford Park and Nick flips up his collar, forcing curls of crow-coloured hair against his neck. He stops by the gate, produces some Golden Virginia and a battered Rizla from some hidden pocket and gets rolling. As soon as I see the baccy, I know I want a smoke. I’m supposed to be giving up… Ah…

Even with half his stupid hair blown across his face I can see he’s rolling his eyes along with  his cigarette, but he obliges anyway. The others haven’t seen us and move on ahead. Peering into the park to distract from the cravings, I pick out the ‘blue iridescence’ sculpture down the path. It’s meant to be asparagus – loads of it once grew around here. Shame it doesn’t now; I love the stuff. Still, there’s always Sainsbury’s.

That’s when I spot the papers. Skedaddling around the sculpture. Buoyed on the breeze. Snagged on the grass. Nick hands me my eagerly-anticipated rollie, as I bend to retrieve a sheet trapped in the railings at calf-height.

“What is it?” Nick’s voice catches slightly as he exhales, his second-hand smoke snatched by a similarly-addicted wind.

I smooth out the crumples and blink. “It’s some Shakespeare script, by the looks of things.” One of the corners is missing, and I can’t make out the words in the dark and drunk.

“They could’ve put it in the bin, the skanks.”

I crane forward to see if Will’s still about. He’s not. “Well, mate…” My voice drops as I send a swift elbow into Nick’s arm. “Not everyone likes recycling other people’s words.”

Passing the Black Horse, we’re tempted to stop for one last pint. An old bloke in a new Fred Perry eyes us from the doorway and Rob thinks better of it. “Millwall played today, mate. Best give it a swerve,” he says, guiding me away from the door as if I were an errant child drawn to a tethered dog. Further along and over the road, I trip over a box of soil shoved diagonal to the Pepys Estate. Someone’s scooped out the middle like some bastard who’s ripped out a girl’s heart, leaving her crying at the roadside. Never mind. I flex my stubbed toe, shake off thoughts best saved for sobriety and press ahead.

We always lose Will at Rolt Street, where he still lives with his mum. At the turning he kicks an empty Union Jack fruit box, before crowing “I have a dream” at the Martin Luther King graffiti above it and blundering out of sight. I don’t waste much time.

“- Mate, don’t start this again.” Fraser slaps a bent-double Coke can from the pillar by my block, sending it clattering into the road. I persist, drunkenly fumbling grudges into the conversation and my key into the front door.

“ – Lemme finish, Frase. He… He keeps bloody nicking my ideas. It’s like the minute I write something, the second I mention anything… He’s gone and done the same thing five seconds later. Know what I mean?”

“Yeah, Marlie. Give it a rest.” Something in Fraser’s voice gives me pause, but I fill it – and my mouth – with oily, fatty chicken.

“Ain’t no thing but a chicken wing,” I conclude, distracted and defeated. We enter the hallway and take the lift to my floor in silence.  Once safely indoors, I head for the bedroom and collapse onto my mattress, shelling the heels of my shoes and kicking them aside. TV on, shoes off.

“Hung out to dry.” Fraser remains in the doorway, an unlit fag clasped and cocked between his lips.

“What, mate?” I gnaw the cork from an already-open bottle of claret and splash some into a dirty tumbler. Rob perches on the end of the bed, tipping Pringles into his lap.

“Was just thinking. That graffiti we saw just then. Funny, that. How it says ‘Hung out to dry.’”

“What you chatting about, Frase?” I plant my foot in the small of Rob’s back, sending his crisps skittering to the floor. He swears and swivels to pick up the pieces.

Fraser crosses to the bed and plants himself between me and Rob, obscuring my view of the TV. By now he’s all reds and pinks; blurred eyes and blotched cheeks. Sitting too close, like a weirdo on a night bus.

“Alright, Fraser. We’d best be chipping off, yeah?” Nick’s back from the bathroom now and leaning against the jamb.

“Don’t know what you’re going on about, mate.” An easy lie.

“You know full well. You and Ev. A few weeks back, in the Vietnamese place – “

“What are you talking about? What Vietnamese place?” There I go again.

“Mate, don’t… Mama Pho’s, down the road. You and her. I saw you in there with her, Marlie.” He sways towards me, buries both fists in the mattress and hauls himself off the bed.

“- Come on, Frase.” Nick moves towards us, ready to pull us apart.

“-Yeah Nick, alright. Alright. Let’s get out of here. Just…” Fraser bats him away and braces himself against the wall. There’s a brief pause as he pulls himself up to full height. “You… You chat about Will nicking your stuff, but you’re a hypocrite, mate. Ahhh… Whatever.” His knee cracks as he makes for the door. Still sore from the run, perhaps.

Then come the famous last words:

This is where I forget.

“He says you hit him.” Back in the present, Ev’s still pressing ice against my eye socket. Cold melt water trickles and tickles at my skin, and a flash of blue and orange flickers into view. A drop reaches my lips: I taste a tang of metal, not unlike blood. A faint scent of prawns confirms that she’s multi-tasking: Soothing my injured face and defrosting a bit of dinner. There’s nothing else in the freezer, except perhaps that creepy Dafoe-voiced polar bear with the too-small eyes. Aye-aye, Cap’n Birdseye.

“Yes. Twatted him over the head with that stupid duck from over the mantelpiece. Twice. Then there was a fight, Rob says. Somehow, Fraser got you right above the eye with a satay skewer. Thank God Lewisham A&E’s still open, or we might’ve been in trouble.” With my remaining good eye, I scan her face and know with woozy certainty: She’s definitely worth hitting a mate with a duck figurine. And getting stabbed in the face afterwards. Ev smirks back, flicks her gaze over the bruising, and kisses me.

None of it matters but her. Not Fraser and our gone-forever friendship, not the duck or skewer, not the hours of oblivion in A&E, nothing. Only my Evelyn on Evelyn Street.

You know what, though? I could murder a Merlot right now. 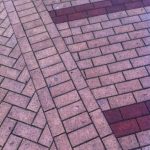 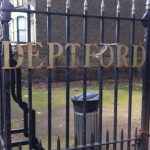 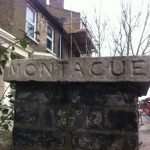 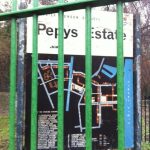 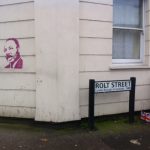 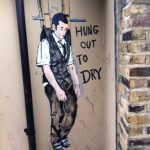 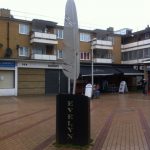