Before the Court by Andrew Motion 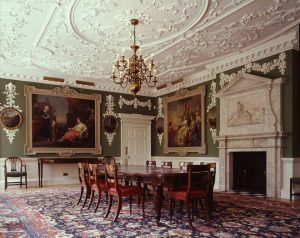 The Interior of the Court Room © The Foundling Museum

The reconstruction of the Court Room, and the preservation of all its original pictures, allows us to feel an extraordinary sense of difference as soon as we step in through the door. A difference between the grandeur of fixtures and fittings that dazzle us, and the environment of the children elsewhere in the Hospital – however well they were treated; and an equally great difference between the circumstances of the wealthy and powerful men seated at the table, and the plight of the women who had to appear before them. No matter how well-intentioned these men were, they must have seemed intimidating. And the women carried large burdens of shame, guilt, embarrassment, rage, unhappiness. And they had a lot to lose – or gain. And a Court is a Court.

For all these reasons, it seems to me highly likely that a woman stepping into the room to make her case would be unnerved at best, frightened at worst. Certainly she would feel buffeted by the richness that suddenly surrounded her. In my poem I imagine such a woman losing whatever sort of articulacy she might usually possess, and speaking in broken sentences – feeling almost overwhelmed by the difference in status and circumstance between the men and herself, not wanting to damage her case by making anything like a complaint about it, but at the same time not able to ignore it completely.

Also for these reasons (because it is what we all do when we feel thrown) I thought it fair to assume that my speaker would be aware of the fine things around her as a kaleidoscope of bits and pieces; she would not be able to understand them properly or make them coherent. For this reason, her eyes cannot take in a whole picture, or comprehend an entire narrative, but swerve from detail to detail and latch onto images that she recognises: the detail of boys playing marbles in Gainsborough’s little roundel of Christ’s Hospital; the tuft of bulrushes in Francis Hayman’s picture of The Finding of the Infant Moses.

At the same time, and finally, she wants to assert her worth.

When I was given the Court Room as my subject, my first and unspoken reaction was that I’d rather have been allocated something small to write about (something small I would then try and make big), such as a button or some other token. But as I stood in the Room itself and started to tune in to its long-since- silenced voices, I began to think there might still be a chance to move outwards from little to large in the same way. I hope so, at any rate. My poem is an attempt to use the discipline of writing a Sestude as a way of wringing the largest possible amount of meaning out of each of the 62 words I was allowed to use. And to let the silence around those words add invisibly and uncountably to their number.

I am a woman of good character