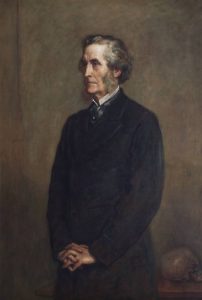 I found myself at the Foundling Museum on a wet Sunday, standing in front of my object, a dark portrait in, what felt like, an overly ornate room. I had wandered through the rest of the museum, caught up in the accessible lives of the foundlings, and on first glance Luther Holden’s portrait didn’t inspire me.

His wasn’t the story I wanted to tell. His picture was found up a winding staircase lined with portraits and paintings, in gilded frames. While on the lower floors the exhibition space told the stories of poverty stricken children facing awful circumstances; their lives decided sometimes by a cruel lottery system. It told of terrible separation. There were glass cases filled with tokens carefully created by parents who had to part with their children. The tokens were so they could identify their child, if ever they could return to collect them. These items had power and poignancy, in comparison the portrait left me cold.

I left the Museum inspired by the stories of the children, but not my object. In trying to connect to the portrait, I read about the man behind it, mainly his obituary. It turned out that, like many of the Foundlings, he had undergone an apprenticeship, unlike them this had lead him into a career as a surgeon and later a professor and anatomist. He was also the Foundling Hospital’s Honorary Surgeon.

The Foundlings’ Hospital seemed to be ahead of its time in terms of health but lacking in love. There seemed to be a strict and strange dichotomy made between physical health and affection. There was a great desire to help; to avoid the death of babies on the street and to educate and protect these children for the good of society and the children themselves. Yet this charitable will seemed to stop at physical health and not consider emotional health or happiness.

However I realised these were the sensibilities of the age and although there was little outward affection the people behind the Foundlings museum were warm-hearted and their legacy, and Luther Holden’s, continues on today through the people they helped and the changes that were made because of them.

Holden’s profession and connection to the Hospital helped me find my inspiration to write ‘Warm Blooded (Bloodline)’. I found from Holden’s obituary that he had no children and was a kindly teacher. The impression I had of distance from the painting was purely superficial, his intentions were to help others, as was the Foundlings Hospital’s founders, although we would disagree with their methods today.

Gatekeeper to another world.
Old. Dark. Cold.
Admired; framed from afar.
Swaddled in thistles, his Victorian heart beyond reproach.
A scalpel’s cut can pierce the vines. But-
The pulse of good works, beat of charity are not bled.
The blood pumps on.
Ninety years in this dusty town. Still the blood pumps on.
Veins thread, branch-
The legacy pools:
Bleeds for generations.