Lost and Found by Helen Jones 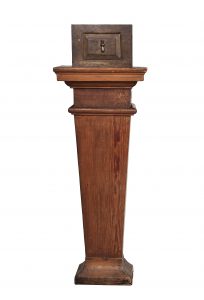 Briefly, in the early 1990s, I lived at number 37 Lamb’s Conduit Street, with a boyfriend, a trainee barrister. The street was very different back then, with none of the chichi shops selling French homeware, beautiful books, artisan sourdough sandwiches or Scandinavian shoes. It was shabby. When night fell, it still had a Dickensian feel, with footsteps echoing down the traffic-free street and the shouts of the occasional drunk weaving back from the pub on the corner.

Ours was a tiny jewel of a flat that we could barely afford. It was hot under the rafters and during the summer we would escape to the leafy squares of Bloomsbury clutching a bottle of wine, some law books for him and a novel for me. But there was one place where we couldn’t go – Coram’s Fields, a two-minute walk away. On the gate there was a sign: ‘No adults unless accompanied by a child.’ We didn’t have a child; we wanted one, one day. So we looked enviously through the railings at the families sprawled on the grass before moving on. That sign sparked my curiosity and during an idle half hour in Holborn library I looked up Coram and learned about the Foundling Hospital and thought I would write about it in some way, at some point. And now I have.

When I was paired with my object – a plain wooden donation box – I was secretly pleased. I didn’t want a portrait of one of the great and good. I wanted something smaller, something more prosaic that had been touched by other hands over the years. Something that I could touch too; something that wasn’t behind a glass case.

The donation box was first installed in 1740 to “receive the benefaction of charitable persons.” I began thinking about all the people that had touched that box and donated money. And a lot of money was donated. On Saturday 18 April 1741, Mr. Taylor White and Mr. Hume Campbell opened the box and found seven pounds, one shilling and six pence. Four days later the Duke of Richmond and the Earl of Abercorn discovered that the box held thirty eight pounds, five shillings and six pence – worth more than 3,300 pounds today.

I began thinking about why people donated money. Were they moved by the sight of the children lucky enough to be taken in by Thomas Coram? Did they think ‘there but for the grace of God go I?’ Or had they perhaps lost a child of their own? Infant mortality in London was around 45% in 1740.

An idea started to form, an image of a mother dropping coins into a box in memory of her lost child. Giving money for other children who were lost to their mothers but who found new lives at the Foundling Hospital. It was prompted by thoughts of a close friend of mine who lost her own child – a stillbirth – despite all the technology now available. With my friend’s permission, I used some of her experience as the basis for my 62 words. It’s written for her, with love.

As for the trainee barrister and me? Like our stay in Lamb’s Conduit Street, it didn’t last. For many years I avoided the area and that red front door, only venturing there for infrequent trips to the dentist at number 39. But in 2001 I had a child of my own and now he plays football and hockey with his school in Coram Fields. I no longer have to peer in through the railings but can walk straight through the gate, an adult accompanied by a child.

I once had a child.
A boy, long hoped for, long imagined.
Two tiny curled fists and a whorl of thick, dark hair
like a question mark for what might have been.
But then breathless, he slipped away from us.
So I drop coins into a plain wooden box for other children.
Children also lost to their mothers, but found again, here.