The Foundling Girl by Joan Lennon 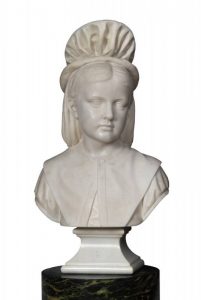 1. I remember when Jamila Gavin’s book “Coram Boy” came out – highly praised – I was definitely going to read it – but the kind of thing it was never quite the right moment for.  If I felt happy it would make me sad.  If I felt sad I’d feel sadder.  So I never did read it.  Just too harrowing.  Now I have 5 1/2 hours on the train down to London to prepare for the Museum on Monday, and I am going to take the plunge.  Wish me luck.  No, wish me courage.

3. During the tour round the Museum on the Monday, we are alerted to the specific 26 objects as we pass but don’t know which one will be ours.  As it happens, I find myself at the back of the group, still in the previous room, when the bust is pointed out, so I can’t see her or quite hear what is being said about her.  She’s tucked behind a door.  I take a quick look as we move on to the next room but there’s no electric shock, no flash of recognition.  I don’t even notice that her eyes are blank.

4. I’ve been to the Edinburgh Book Festival in Charlotte Square how many times?  And glanced at the statue of Prince Albert on a horse (unveiled by Queen Victoria in 1876) how many times?  And completely overlooked the figures of Science and Learning and of Labour how many times?  And now that I know those groups were carved by David Watson Stevenson, who carved my girl, I can’t get into the Square to properly see them, because it’s private.  Only (except for Festival time) open to residents of the fine Georgian houses round the Square.  All I can do is peer through the railings.  On the outside looking in.

5. She is at the back of my mind most of the time now.  Disconcerted to hear that she might be moved somewhere else in the Museum for the summer.  My sense of her is tied up in the way we met and the place she is in now – her setting is part of her, for me.

6. The poem insisted on coming today, in spite of a snotty nose (mine, not its) and me still having more reading to do on the statue and the Museum.  It wants to be about leaving and being left, the longing to know what happened next, what happened before.  It wants to be about how her eyes are blank and her colour matches the wall behind her, how the colours of the column she stands on are bold green and gold, and black and red, and how the bust of the man on the matching column has carved pupils to his eyes and an orange nose and a finely-curled important wig and a stern important expression.  It wants to be about the expression on her face and how hard it is for a modern audience to read.  I asked a few people at random and there was no agreement.  People saw complacence, sadness, blindness, acceptance.  Is there the barest quirk of a smile on her lips?  What would Stevenson’s contemporaries have seen?

The poem wants to be about all these things and a lot more, but 62 words is tight.  I’ll have to choose.

7. I’ve had an email from the Museum.  They don’t have much background information specifically about the bust beyond what’s already on the label.  It doesn’t matter – I’ve done the general reading, and I feel as if I know her.

8. It’s down to fine-tuning words now, here and there, moving white space about.  I love the scale of poems – containable, compared with a comparable stage of re-writing a novel.  Not easier – of course not!  Just different.

9. My sestude has come back from my editor.  After any absence, words always seem a little alien, as if someone else wrote them.  When I go to see my Foundling Girl again, will it feel the same?  Will she still be mine?

you,
made marble
at the point of leaving,
when, capped and tippetted
since toddling,
you’d be ossified for life –

what came before?
what happened next?
this building throbs
with our desire
to know more than
snippetted split-second still-lives

he
made you,
left you,
a chip of marble
your token