Side by Side, by Mike Reed 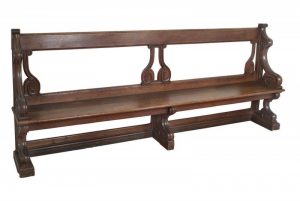 To begin with a confession: I’d never been to the Foundling Museum before this project began. In fact, I only heard of it by coincidence shortly before that. Shame on me: the Museum, and its story, are remarkable facets of the city I love so much. However did I miss them until now?

Mind you, perhaps it was good to come to the story afresh. As we were guided around the exhibits for our briefing, the discovery that unwanted babies were once simply abandoned by the London roadsides was as startling as it was heart-wrenching. Instantly, Thomas Coram the individual became more vivid in the mind: one could imagine, albeit in a small way, the shock and horror he must have felt at the sight of these deserted infants.

Discovering I’d been assigned the chapel pews raised a smile. As the son of an Anglican clergyman, I spent a good deal of my own childhood seated on one pew or another. At first, I wondered what parallels I might draw from this coincidence. But if Coram’s story is about anything, it’s about looking beyond oneself. Quickly, I ditched any idea of dragging my own story into the sestude.

The pews themselves are fairly simple, heavy oak pews. If there was a story to be told about them, I thought, it would likely be about the people who sat in them rather than the objects themselves. People are always the key, after all.

So, how fortunate I was to be handed a wonderful insight into those people by Kathryn Wilson at the Museum. Kathryn emailed me a 2011 article by Professor Rosemary Ashton, who runs the UCL’s Bloomsbury Project – an ongoing investigation into ‘Bloomsbury’s development from swampy rubbish-dump to centre of intellectual life’ (to quote their website).

The article reveals a canny fundraising venture that began at the Hospital in the 1790s. In those early days of the Chapel’s history, Londoners (including, for a time, Charles Dickens himself) would pay between two and eight guineas to rent a pew.

In return, they could come and hear the children sing, and see new foundlings baptised. ‘Celebrated clergymen and bishops’ also preached at the Chapel, Professor Ashton notes – including ‘the well-known wit, the Rev. Sydney Smith, who was an occasional preacher at the Chapel from 1803 to 1809.’

Competition for pew-space became fierce enough to spawn a waiting list, along with some distinctly uncharitable behaviour over who got ‘the best seats’. In 1823, James Smeath of Lamb’s Conduit Street wrote to the Secretary:

‘Sir, After two years’ application, & a regular attendant at the Foundling for twenty years, I had some reason to expect a more desirable sitting would have been afforded me, than in pew No. 15, which I must beg leave to decline accepting’.

One would have hoped the Smeaths of this world might see a little further than the ends of their noses, but human nature is what it is.

In fact, things went well beyond the odd snotty letter. In 1804, a ‘respectable maiden lady, Miss Elizabeth Sayers, living with her brother James in Great Ormond Street, came into conflict over a pew with a Dr Willain, a specialist in cutaneous diseases, who lived with his wife in Bloomsbury Square.’

Spurred on by his wife, Dr Willain ‘took [Miss Sayers] by the shoulder and tried to push her out’. The Chapel authorities later requested that Miss Sayers give up her treasured tract of oak.

The fracas was immortalised by James Sayers in The Foundling-Chapel Brawl, A Non-Heroic Ballad, with Notes Critical and Explanatory. (His 1805 sequel, in which the spirit of Thomas Coram visits the Committee to chastise them for siding with the Willains, is available as a Google e-Book.)

God prosper long our noble King,
—–Our lives and safeties all,
I’ th’ Foundling Chapel lately did
—–Occur – a woeful Brawl.

A place unmeet for such a deed!
—–Did Coram e’er foresee,
Where Charity and Peace should reign,
—–That Pride and Feuds should be?

Well, quite. And here seemed a perfect story for my sestude. It felt like a story Dickens himself might have chuckled, and shaken his head, over: that even here, on the site of such genuine charity, people would fall to push-and-shove over whose largesse bagsied them the best seats in the house.

And as so often in Dickens, it felt like the more wretched elements of human nature served, by contrast, to highlight the best. The pettiness of Willains and Sayerses reminds us of how grateful we must be for Corams.

I thought it would be fun – as well as a challenge – to write the sestude in the verse form chosen by James Sayers for his original account. Doing so, and achieving the strict word-count, was pretty tricky: many lines and verses bit the dust. But hopefully the story comes through clearly enough, in the end.

The only way to end is with a huge thank-you to the Museum team for this lovely opportunity – and especially to Kathryn Wilson for providing such inspiring background on the pews. Let’s hope this project goes some way towards making more people aware of the Museum’s story, and the vital, ongoing work of the charity that still bears Coram’s name.

These pews sat in the chapel once,
—Their spaces highly prized
By wealthy Londoners, who paid
—To see the lost baptised.

Whose charity was rewarded best
—Disturbed the gentlefolk.
Miss Sayers and the Willains ‘brawled’
—O’er one prime patch of oak.

Pure Dickens! (Yes, he sat here too.)
—Such ignominious pride
Just highlights Coram’s virtue when
—The two sit side by side.