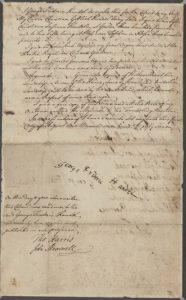 The great and good Mr Handel: The story behind the story

In many ways, Handel just does not fit with the Foundling Museum. In a place recalling the forgotten, the poor and the unloved, he was an immensely wealthy man with many close friends, who is as revered now as when he died more than 250 years ago.

His ‘object’ too – his last will and testament – is out of place. Next to the small, often monetarily worthless, tokens the foundlings’ mothers left with their babies his will is vast – as big as a child – and, with his seal and endless hand-written bequests, speaks of wealth, culture and connections.

I had known very little about the composer before visiting the museum’s Handel Gallery. But the sense of his prodigiousness, of his being larger than his surroundings, that struck as soon as I read his will, endured the more I discovered. In particular, the sense of his ‘big heart’ that I felt when I first read all those bequests, got stronger and stronger.

This is a man who gave and gave: of music, of friendship, of money to charities, of an organ to the Foundling Hospital, and the score of Messiah too, so that his work could keep housing abandoned children in perpetuity. A man who, despite failing sight, eventual blindness and bouts of serious illness, kept on feeling and giving joy. And who still does give joy: I went to my first ever Messiah at a local church while researching this project. In a sing-along format, gifted soloists and enraptured amateurs had as much fun as they must have done at the oratorio’s first performance in Dublin in 1742.

One of Handel’s last friends to see him alive, on his death referred to him as the “great and good Mr Handel”. It came as a shock, in these knowing times, to find out that anyone ‘great’ could truly be ‘good’. That a genius might not be a sociopath, that a public figure should not have grave private faultlines, that a rich, well-connected man might not overlook widows, servants and orphans in his will.

Précising the essence of George Frideric Handel in 62 words is a challenge for the quite-good-but not-at-all-great writer. To capture kindness, generosity, humour, genius, loyal friendship, all rolled in with grace in ill health without sounding cloying and sentimental is hard. So hard that, if we still wrote – and rewrote – on paper rather than screen, my litter bin would be filled with rejected pages.

But considering a life – and output – so great does spawn humility and pragmatism (after a certain amount of teeth grinding, admittedly). The world does not need my sestude to tell it how stupendous Handel was and of the priceless contribution he made to the world in general and the Foundling Hospital’s children in particular. His life and music have been doing that very well for three centuries, as they will for many more.

And if just one person realises his greatness through my piece, that’s enough. And one person already has.

Messiah took 24 days to write,
Handel’s testament, nine full years.
There were always further gifts to add
For servants; widows; causes; peers.
As blindness obscured the light, like that vast will’s leather hood,
The hand that wrote his names faltered
As his baton never could.
But darkness does not cloud all vision
And in the chapel, his music soared on. Hallelujah.