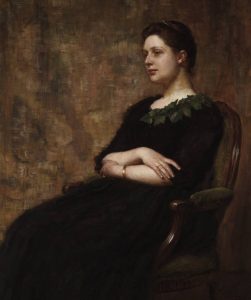 Cecil Rhodes – one of the men responsible for the colonisation of ‘Rhodesia’ – has been in the news. Some young black people in South Africa, students from the University of Cape Town (UCT), have been throwing excrement at his statue.

The husband of Mrs Forbes, the lady in my painting, was pallbearer to Cecil Rhodes in 1902. The two men stood together at battles in deepest Africa. They captured land for the Empire, killing locals as they went.

The students at UCT cannot understand why South Africa should still celebrate men like Cecil Rhodes.

I wonder what Mrs Patrick Forbes thought of her husband’s time as leader of the paramilitary British South Africa Police. Her painting shows her as a benign lady, as far from those colourful, heroic men who surround her in the museum as could possibly be. Back then, women’s opinions weren’t thought of as important. So what did she think and what did she do with that thinking?

As, later in her life, Governor of the Foundling Hospital, how did her husband’s past life sit with her? Her hospital prided itself on benevolence and philanthropy. Did her husband show such compassion at war?

What if she believed her husband’s actions were far from gallant – but could never tell him? What if she kept a diary and wrote her honest thoughts there? What if, fairly soon after the death of Cecil Rhodes, she wrote a poem to her husband that she never showed him? I think she’s holding it in her left hand in the painting.

In the poem she pleads with her husband to stop glorifying what happened in Africa. To stop celebrating the conquests and the deaths of those natives who were slain. She is prescient enough to know how history will speak of him – and of Cecil Rhodes.

Let them be, Dear Husband,
For what you did is not gallant.

Years will be unkind to Cecil and Empire
And Lies will be revealed from Colony to Colony
And Injustice will engrave your Stone
And I shall exist absent from your Heart.

In your Stead I shall offer Love to our Dearest Children –
For They always accept with Colour and Grace.