Scrolling Past by Irene Lofthouse 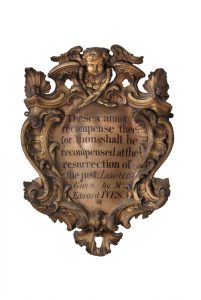 When the opportunity to take part in 26 Pairs of Eyes came up, I threw my hat in the ring immediately. I was very taken with the Foundling Museum when I first visited several years ago. It was a happenstance; wandering around back streets with a friend, we came upon it and were intrigued. Many of the stories resonated, working as I had in children’s homes many years ago.

When partnered with cartouches as my objects, I was a little nonplussed. I knew I hadn’t seen them when I’d visited, so the brief to bring them to the notice of visitors through a creative response felt quite a challenge.

I could see why I may have ignored them as I wandered around the museum. Religious inscriptions, cherubs and angels are not things that float my creative canoe. Although, in general, I’ll be the one looking up at cornices, mouldings and ceiling roses (being a plasterer’s daughter) the locations of two of the cartouches don’t leap out for easy viewing as the more decorative work does. So, I needed to delve deeper into why they were there.

Discovering that two of them were lead-painted to look like wood intrigued me; it suggested a metaphor for the foundlings themselves, their new names and clothes masking the real person. So I had a starting point.

Digging deeper in to the etymology of the word with its Latin, French and Italian meanings revealed how it had changed over time to represent many things. Its Egyptian origins gave it a role as a protector of a name and person. This chimed with the Biblical quotations featured on the pieces. It gave me more ideas to play with about nurture, how we hide ourselves behind disguises, and how we want to protect ourselves and others.

I also found another definition of the word: ‘the paper case holding combustible materials in certain fireworks’ (1).  This further metaphor again appealed, both as a time capsule and as a storage device with a long fuse that could erupt, shattering ‘normal’ lives, uncovering hidden histories far into the future.

This left the identity of the donor to feed into my musings. As he was named, as Edward Ives, I thought this would be the easy bit. But here was a mystery. There was no information on the museum website or booklet, only a short paper by a volunteer that threw up many questions (2). Who was he?

Was he the Edward Ives given the contract to provide all the plumbing for the hospital in 1743? Or was he the naval surgeon Edward Ives who could be linked – via services for sick and wounded sailors in Gosport, Hampshire – with Theodore Jacobsen, the Foundling Hospital architect who also designed the Royal Hospital for Sick Sailors at Haslar, near Gosport, which was completed in 1761? We don’t know – It could be one or the other, or neither.

Again, I felt a resonance. The cartouches, the donor, the foundlings – all were enigmas with an outward façade masking the inner reality.

Many children go through a phase of feeling that they don’t ‘belong’ in their family, that they’re foundlings or adopted. I know I did. It is part of our journey towards understanding who we are and how we relate to our siblings, parents and extended family. We often create a persona for ourselves as a coat of armour, our protection against a shifting world. Our own cartouche.

Fleetingly, eyes roam over me, never noting the carapace enveloping an enigma.

I am other than I was, named but unknown. My form as ancient as Pharaohs, an amulet protecting their person.

Plumbing the depths, my art banishes evil, spreading good luck for them, for me, for you.