An imagined correspondence by Sue Evans 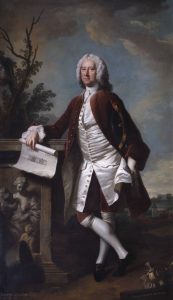 Thomas Hudson, Theodore Jacobsen, 1746 © Coram in the care of the Foundling Museum

An older ad-age: The story behind the story

My paired object is an arrangement of oil paint on canvas enclosed within a picture frame with egg and dart moulding. The synthesis of the artist’s brush strokes reveals a portrait of Foundling Hospital architect Theodore Jacobsen (c. 1695 – 1772), and somehow I feel a need to draw a line between my object and the man.

On first scrutiny, I notice little sign of Jacobsen’s Teutonic origins and mercantile background. His wealth came from his Hanseatic family’s trading house at London Steelyard, a walled dock on the River Thames. Clues to his later architectural calling are in the painting – a Composite capital at his feet and a half-unfurled architectural plan and elevation of the Foundling Hospital in his right hand. The Woman with three children in the carved relief is Caritas or Charity, presumably referring to Jacobsen’s philanthropy for he received no financial reward for designing the Foundling Hospital. Perhaps Thomas Hudson’s portrait of this prosperous and enlightened man, and apparent member of the landed gentry, was recompense enough.

During his prolific career Hudson painted more than 400 portraits of members of the aristocracy, political figures and Anglican clergymen, as well as musicians and people in the theatre. His work was especially in demand during the mid 18th century and the Foundling Hospital must have benefited from his success, as in 1746 Hudson became a governor. He donated his painting of Theodore Jacobsen to the Hospital along with his portrait of Vice-President John Milner the same year. Both paintings hang next to one another in the Picture Gallery and are very different in tone. Jacobsen was a founding governor and by all accounts worked diligently to design and oversee the building of the Hospital over many years. Milner was his contemporary and noted for introducing the lottery system for the admission of foundling children. In his portrait Milner looks a troubled soul. I imagine correspondence between them during the Hospital’s early years, both men having had to deal with scandals, disputes and delays during their tenure. Maybe a visit to Jacobsen’s country house in a secluded dell in Surrey known as Lonesome, the lush valley of the River Tillingbourne, could have improved Milner’s spirits.

It was only later that I saw the birds. I was trying to work out what the metallic object in front of the carving might be and zooming into the digital image of the painting on my laptop. Then, barely distinguishable in the dark void underneath Jacobsen’s bent right knee, I could just about see two pairs of eyes, beaks and a swirling mass of feathers. Chickens perhaps in recognition of Jacobsen’s bucolic lifestyle at certain months of the year. My feelings about Jacobsen were ambivalent. I wasn’t sure I liked him. I felt distanced from him, wondering how all this apparent opulence equated with caring for poor abandoned children.

The birds are eagles. Or to be more precise, there is only one bird – it is the double-headed eagle associated with the Hanseatic League coat of arms. I had missed this wonderful creature when looking at the painting in the museum’s Picture Gallery, the reflections on the canvas from the windows opposite making the darker details difficult to see. The scales fell from my eyes – the painting is not about Jacobsen aspiring to look the quintessential English gentleman. Its purpose was to persuade Hudson’s clients that they too could appear refined and fashionable, and lords of all they surveyed.

I was wrong – Jacobsen hadn’t turned his back on his origins, and with this discreet painted gesture the artist acknowledges the architect’s true identity. This portrait is unequivocally an advertisement for the work of Thomas Hudson in London’s first showcase and emporium for the arts.

Charitable Institutions do not build themselves, I fear.

You look tired, Milner. Come to Tillingbourne. We shall take the air, eat waterzootje and drink to the memory of King William.