The clue is in the title

I stand white, majestic and foreboding

above gull blanketed, jagged rocks below.

I am a ship, adorned in luxurious, Art Deco splendour,

jutting out of the beckoning ocean,

far, far away from the main shore.

My tidal isolation is the perfect backdrop

for murder, conspiracy and intrigue.

My spit is transient.

Come to me, the island of soldiers, 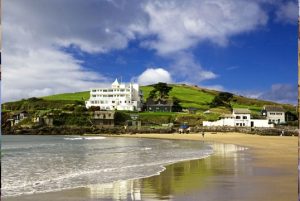 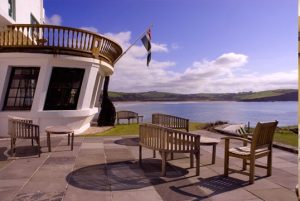 My journey began by ‘Google’! I researched Burgh Island Hotel and followed my nose, so-to-speak, with entries including ‘Tripadvisor’, the ‘Telegraph’ review, the ‘Good Pub guide’, the Good Hotel Guide’ and the hotel’s own website. Not able to visit, although I did research room availability, I cast around for photos and people who had; a couple of relatives had been there and I wrote down their lasting impressions.

The Agatha Christie connection (but also Noel Coward, and the filming of TV favourites such as Poirot and Lovejoy) was a gift and I enjoyed trawling second hand bookstores looking for a couple of titles that were set on the Island; ‘And Then There Were None’ featuring ‘Soldier Island’ apparently, the ‘best-selling crime novel of all time,’ is indeed a good read!

I then left my research for a few days to see what lasting impressions stayed with me; my title came instantly and the rest of the sestude almost wrote itself. With one or two good friends to read my initial drafts, I was fairly content with my prose and then it was just the trepidation of sending it to the editor to contend with….. 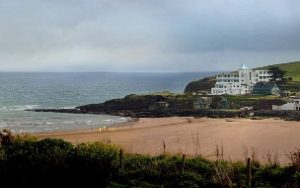