BT45 8RZ is the site of St Malachy’s, Castdeldawson, where Seamus Heaney played Gaelic football as a boy.

My Lady’s Tresses of Church Island

That night he dreamed
of a church spire straining
through the saturnal ring of
spinach yews and silken water.

On carpet-damp moss,
he lay among the cattle,
one forefinger marking time
to a sandpiper’s winnow.

Long before dawn he awoke; knowing
that if the poems of the universe should perish,

wild orchids would spring from the earth and replenish what was lost. 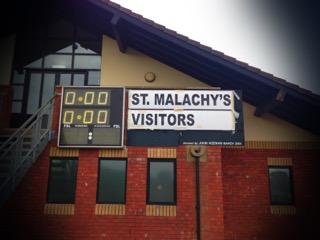 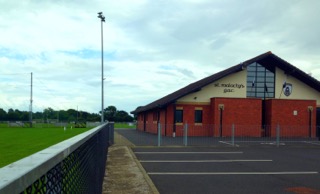 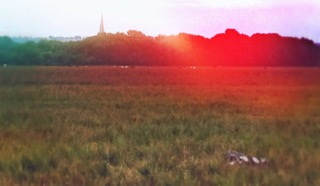 My dad is a Derry man. So was Seamus Heaney. They knew each other, not through writing, but sport. Fitting then my postcode should be where Heaney played gaelic football, a club he supported all his life.

I wanted to go. I persuaded the children to come, reading them a favourite Heaney poem The Strand at Lough Beg – a violent, dreamlike poem about the murder of Heaney’s cousin.

St Malachy’s is unexceptional, typical of any Irish rural sports club. The kids didn’t even get out of the car. We searched instead for the more romantic horizons of Church Island on Lough Beg, the celestial place featured in the poem and supposedly just a mile down the road.

We couldn’t access it. We could see it though. Driving through narrow lanes, I stopped to ask for directions from a boy of fourteen. He wore a red and white Gaelic jersey and was clutching a writing journal. He was polite and serious, warning that if there were cattle in the marsh, it wouldn’t be safe for the children to cross.

We never made it to Church Island. Instead, we met a beautiful Bellaghy boy walking in the sunlight, proudly wearing his team’s jersey, his precious words tucked purposefully under his left arm next to his heart.