Once
you came on a
flying visit
borne on a high wind
from Spain
a secret agent
a migrant.
You stayed. You became
more London than Londoners
losing your accent
adopting a cockney swagger
hiding in plain sight
a model native.
Your otherness unnoticed now
your bark camouflaged in khaki.
You fit in
cityslicker.

This tree
always will be
you and me. 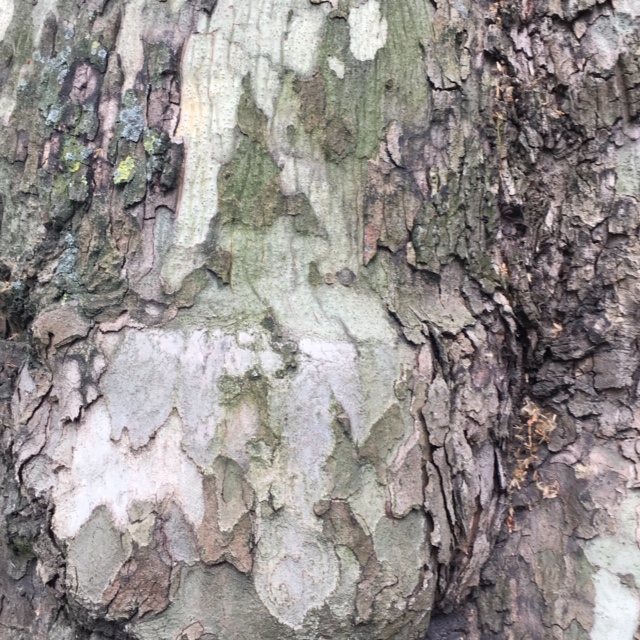 It seems there are few specific uses for a plane tree after it’s died. Apparently it used to be popular for making veneers because it’s an attractive golden-brown colour with dark-brown flecks.

The idea of ‘veneer’ fitted in a loose way with the thought that had driven my sestude: that the plane tree is not quite what it seems. It’s a migrant assumed to be a native. And with its peeling bark and khaki camouflage it’s a secret agent under that cunning disguise.

Other thoughts occurred when I returned to Highgate Woods, one of my favourite places, not far from where I live in north London. I’d arranged a walk & write around the woods, with Neil Baker and I leading a group of 26 writers. We wandered through trees in the company of writers. Writing. Pausing. Observing. Setting exercises. Writing. Reading the results.

Opposite Highgate Wood is a line of plane trees doing its valued job of countering pollution. It seems to stand guard along the eastern border of Highgate Wood, next to Queen’s Wood – both ancient woodlands that are part of London’s forest (London is a forest by Paul Wood was an inspiring read).

Enter Highgate Wood. I run through here every Sunday morning. It’s dominated by hornbeams and oaks, with holly, beech, wild service and other trees. It’s a haven for local people and also for wildlife – birds and bats particularly love its leafiness and the natural crannies in wood.

When trees die they are left to rot over time in Highgate Wood. Decay becomes a positive aspect of woodland management as the old timber becomes home and food for insects of many kinds, while providing a rich friend for moss, lichen, fungi. The old uses for timber are less needed these days – we no longer rely on wood for fires, tool handles, naval ships.

Which all raises the question of use and usefulness. The trees might not be consulted but they feel good, you sense, about living a useful life in a community – and continuing to be useful after death.

There’s a message for us in this. Live a useful life. Support community. Help others. Leave a legacy of usefulness after you’ve gone. In this way the tree becomes a symbol of the natural cycle and of nature’s interdependence. Each tree is independent; each tree plays a bigger role when it’s part of an interdependent community.