Summer’s fierce height and
the streets are empty at noon.
The air here is warmer than blood
when you bloom, peacock tree.
Chilli bright blossoms on ashen bark,
crimson flowers fall stark upon
tired earth to bless the dead who call
from their tombs. Seeds split in forest
fires, life bursts from embers. You rise
again a flaming bird, red as myth. 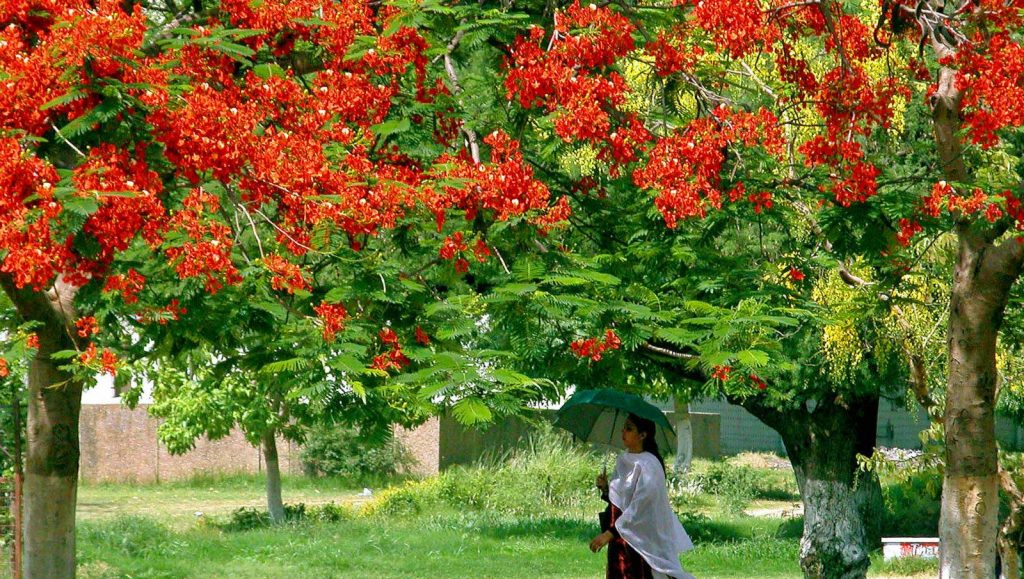 Like the tea and chilli plants, the gulmohar was introduced to India through colonisation. Native to Madagascar, the tree thrives in India, tolerating drought and bursting into dramatic bloom during the scorching Delhi summer. Temperatures in the hottest months of May and June soar above 40°, schools are closed and tempers fray. Dusty desert winds blow through streets and the tarmac shimmers in the heat haze.

The gulmohar provides shade, with a spreading green canopy of fern-like leaves. It is planted for the showy scarlet flowers, four claw-shaped red petals and a variegated rani, or queen petal. Gulmohar means ‘peacock flower’ and the tree grows on roadsides, in parks and gardens. From the 12th to the 19th centuries Delhi was ruled over by dynasties whose rulers built elaborate tombs and forts in extensive gardens, now a welcome relief from intense heat and inescapable pollution.

I remember the gulmohar from holidays in Delhi as a child. We spent summers sleeping on the roof in the cool night air, strolling through gardens veiled by dusk, watching ceiling fans spin. Few had air-conditioning in those days. The rickshaw was our transport of choice, with an occasional ride on the back of a cousin’s motor scooter. The streets were mostly empty of cars, though there were rickshaws and motorbikes as well as cows and stray dogs. A peacock would sometimes emerge from roadside trees to strut in a shower of rain. The sky was a deep, clear blue, the sun scalded our skin. We obeyed our elders’ injunctions to stay in during the hottest part of the day, though we never napped as they did but read comics and played carom.

I have not taken my children to Delhi, though we’ve visited India. The pollution, the heat and the traffic keep me from the city. With climate change accelerating, these problems grow worse every year, despite a new metro, despite tree-planting initiatives and electric rickshaws. This year, a temperature of 48°C was recorded in Delhi in June, so hot that red gulmohar flowers shrivelled and dropped to the ground. When I read these stories, I wonder how we can go on. What will remain for our children and grandchildren?

In the deciduous forests of Madagascar, the gulmohar’s seeds are hardy, surviving forest fires to germinate in intense heat and rise green from the ashes. I fear we humans are less resilient.