Lost lovers once etched a heart around their initials. Your reply: to graft.

To annul, unhurriedly. And breathe.

The villagers named you, perceiving a skull sculpted from your lattice of
vines and gyrating branches.

We always impress our fleeting identities onto you. You pay no notice.
Our generations become your breaths, each moulding air into tangled
arbour and heartwood. 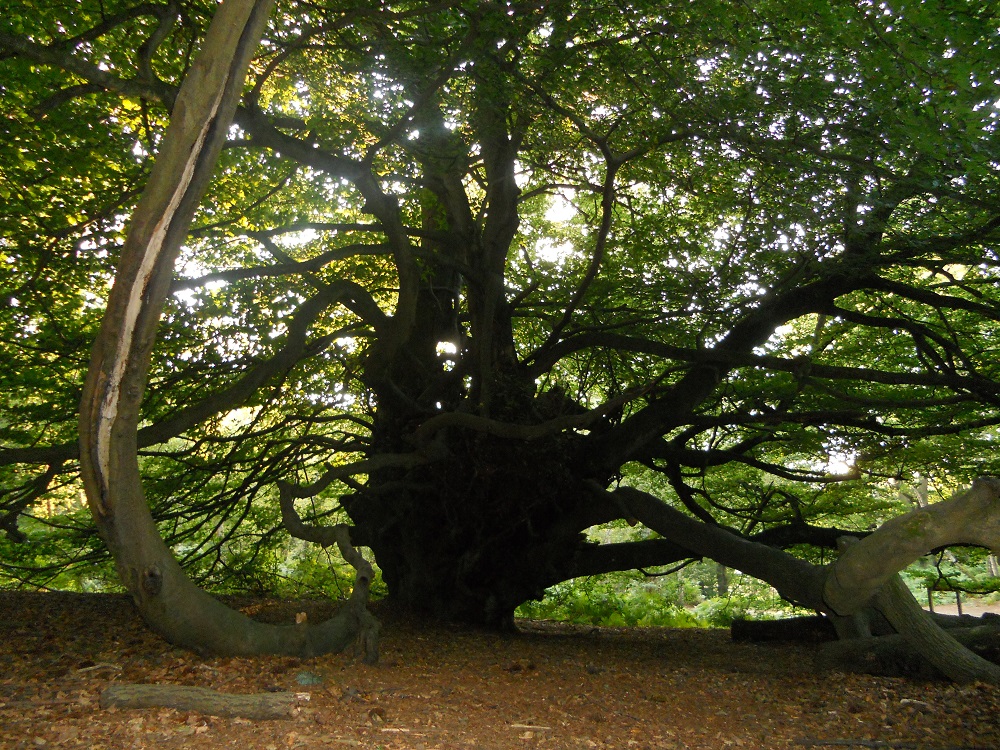 ‘Beech woods have given me truest secrets’ – Ivor Gurney

All trees are beautiful, aren’t they? This one ain’t… It’s an eruption of tortuous limbs and growths; vines and ugly distortions; with horizontal branches as weighty as full-grown trees. More ‘A Monster Calls’ than ‘Faraway Tree’. While in its presence one evening I became aware I was ‘body shaming’ it – and that this was my tree. I questioned my thoughts and emotions in the fading light that reddened the carpet of decayed nuts and leaves.

The tree is the ‘Witch’s Broom’, above the Surrey village of Abinger Hammer. It’s already had 15 minutes of fame – being shortlisted for Tree of the Year in 2017. The term ‘Witches Broom’ describes an undisciplined growth on branches, the result of infections. But in this case, according to the National Trust surveyor, the extraordinary shape likely had a different cause. Around 300 years ago woodlanders probably planted Beech saplings together to ensure a thicket of stems for fuel (maybe for the iron making industry – the name Abinger Hammer references the forge). The clump was abandoned, and it slowly fused into the monster, a favourite climbing tree of children (who hide messages in jam jars around its roots).

I wanted to explore the ‘otherness’ of trees. Our relationship with them seems one-sided. Unlike many animals, trees don’t display emotions, move imperceptibly, and we are in awe of their lifespans. Their otherness makes it hard to conceptualise a relationship. To bridge this gap our mental picture of a tree features human-scale language. Branches become ‘limbs’; the top is the ‘crown’; pine trees ‘whisper’ and willows ‘weep’. We borrow terms and ‘put down roots’. We can’t help but imbue plants with symbolism (poppies for remembrance) or characteristics (solid as an oak). Lovers must carve their names on them (called, rather satisfyingly, ‘arborglyphs’). But the trees seem to exist on another plane.

And despite understanding the science, I cannot truly believe the miraculous alchemy of trees – they take in the most insubstantial element (air) and remove the carbon to form their new growths of softwood, roots and branches – the very essence of ‘substance’.

Language can take us far into an understanding of nature, but the liminal space of a wood reminds me of the limitations of our comprehension and the language we use to order it. The Witch’s Broom ‘shows’ me that there are other, transcendent ways of experiencing these beings.