Flat to the salt hewn brick,
The Mother tree calls
Into the lighthouse’s foghorn yawn,
Past the watercolour sea.

She’s older than the last islander
And the lobsters on the wall.
Fat with bonemeal of bards,
Who fled in boats to pray and die.

Now. City kids splashed with muck,
Kick up shingle,
And spit the pips
Of your small, rare fruit. 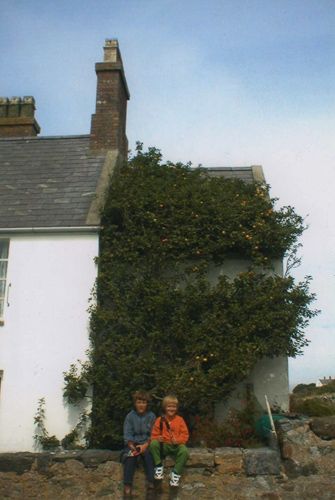 The tree I wrote about used to live on a tiny Welsh island called Bardsey, or Ynys Enlli. Home to four permanent residents and a few hundred sheep, it’s a strange patch of land I used to visit as a child. Far from the smog and grunt of Birmingham, it felt like a place that had been sketched out in a map at the back of a children’s book. Circled by bobbing seals and choppy tides, it was landmarked by an unmanned ‘shop’, a lighthouse, and a grumpy turkey. It’s a place that lives in the blurry photographs my mum took of me plodding along with a bucket full of shrimp and my first serious crush. He was the one who introduced me to the grumpy turkey. I remember trying to explain Bardsey to my classmates after the half-term holidays – it felt impossible. As if the island was cloaked in a brain-fogging veil that protected it from city-slickers.

A quick Google tells you that three visits to Bardsey earn you the equivalent pilgrim points as a trip to Rome. I’m two-thirds of the way there. According to folklore, it’s the burial place of 20,000 saints who fled to the island to escape persecution. It’s also rumoured that the island is the mythical paradise of Avalon, the final resting place of King Arthur, and the place Merlin guarded the The Thirteen Treasures of Britain.

It was my dad who suggested I write about the Bardsey Apple. I’d never knowingly met the tree but I’d have walked past it on the way back to the house for dinner. I like the thought of it growing silently up the side of Plas Bach – waiting for me to get tangled in its myth. It was discovered by horticulturalist Ian Sturrock in 1998, after a birdwatcher told him about a lonely apple tree that lived on the island. At the time it was the rarest tree in the world, and the only one of its kind. It’s thought to be the only survivor of an orchard grown by the monks who came to the island thousands of years ago. And unlike most apple trees North Wales, it’s sainted boughs grow miraculously canker free. The Mother tree has since died, but it’s saplings now grow on the mainland. Alone on an island in the middle of the sea Afal Enlli lives in memory and survives in myth.