I am no sunlit briar: my thorns
are long and septic-sharp.
I hold out bare arms –
their black wounds visible –
I am an expert at self-harm.

I can endure a thousand winters
till I thaw – in my belly
stones from my blue sloes
I dried to cure my ailments
and bring me over the mountain.
I carry my own healing. 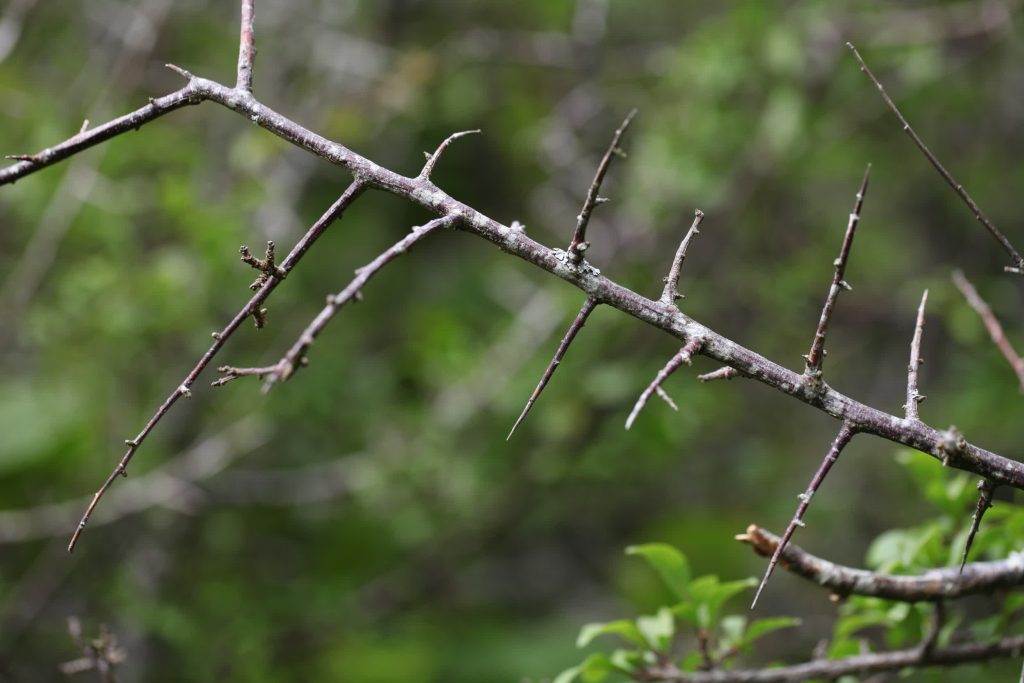 The harshest tree – harbinger of trouble and bad luck – the blackthorn has curative uses that are often also punitive. Its branches were fashioned, legend says, to make Christ’s crown of thorns. His blood dripped purple, the colour of the juice of the tree’s blue-black damson-sized fruits.

Bitter sloe berries – palatable only if picked after the first frost – are mingled with sugar to flavour gin. Sloe gin is a liqueur that helps those slowed by winter’s cruelties to chink glasses in front of warm hearths, hope for a better year. Sloes tincture jams, jellies, chutneys, syrups and pies; dye linens a pale blue. The tree’s sap made medieval manuscript ink.

Mesolithic man ate the tart fruit, spitting pits into midden mounds, which archaeologists like rootling through. Mummified Otzi, who slipped on an icy Alpine summit five thousand years ago, stowed dried sloes in his medicine bag to dine on for his ailments. A blackened berry lay in the snow near his body, out of his earthly reach. The stones, called sloe pits, lining his stomach couldn’t prevent his fate.

The berries expunge and expel bodily liquids and solids; as well as stimulate, contract, cleanse, extract, purify, and alleviate allergies, bladder complaints, colds, catarrh, eczema, herpes, indigestion, neurosis, kidney stones, prostrate particularities, and weak hearts. When dried, the white flowers have healing powers. But carry a spray through the front door and it invites death in.

Blackthorn makes a fiery fire that burns slowly with great heat but little smoke. Heretics and witches were burned on its pyres. Some witches still clung to their magical blackthorn sticks. They affixed blackthorn’s savage thorns to the sticks’ ends, for use in cursing rituals or to pierce poppets.

Blackthorn polishes up into handles for canes and tools. Its straightest stems make Irish cudgels, and stout sticks for regimental Irish officers in the British Army.

Yet blackthorn branches were once prettified with mistletoe and fashioned into New Year’s wreaths, hung from front doors for protection. Blackthorn crowns were scorched in New Year fires, the ashes scattered on fields to fertilise the first sown wheat. Blackthorn sprouts to form thickets that guard Sleeping Beauty’s beauty.