To revel in love’s joyful, bright flame
All that remains are heaped beach cinders and
Discarded memories of the night before
Stirred up by the salty breeze 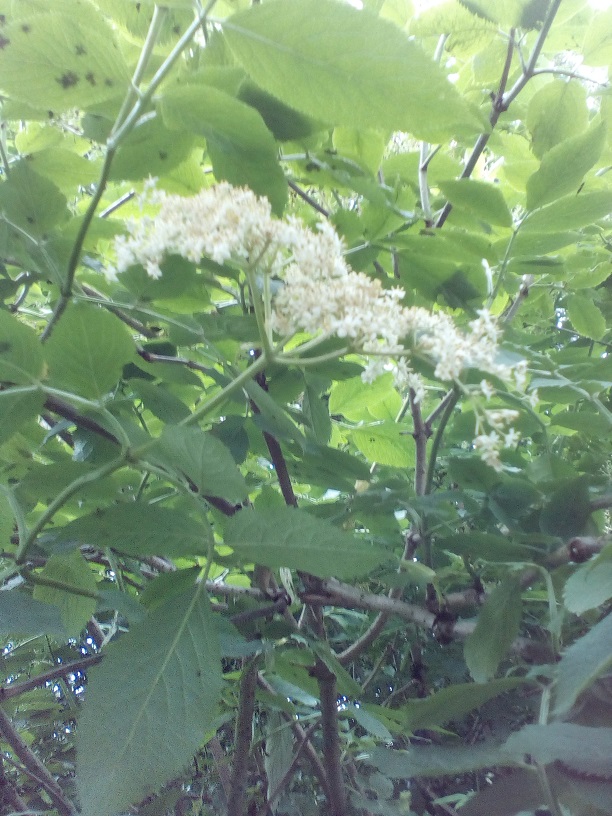 As much of my fiction writing is inspired by ancient myths, I turned to these for research when I was given the elder as my tree. In Scotland, the elder was traditionally seen as a place to enter the fairy realm during Samhain, if you fell asleep under its branches. I also discovered that the name originates from the Anglo-Saxon ‘aeld’, meaning ‘fire’. This has led to its wood being used to make bellows, and the warning against burning it: “Make a fire of Elder tree, Death within your house will be”.

If you needed to use the elder to make your new bellows or musical instrument, and you lived in Denmark or northern England, it was customary to ask the Elder Mother or Hyldemoer for permission before cutting any wood from the tree.

My elder snuck up on me. I’d travelled to Tyninghame near Dunbar where I’d half-remembered a pleasant, quiet forest from a previous summer. The weather was typically Scottish: changeable and ‘dreich’. Fortunately, I didn’t have to go far to find my tree; in fact, I backed into it trying to avoid a tangle of nettles! Its branches jutted out, the green beginnings of berries almost completely replacing the last scattering of flowers.

As luck would have it, the stately home hidden in the woods was hosting a wedding that day, so I spent some time directing confused guests down the right path. While I observed the elder, all I could see were the outlines of fancy dresses heading towards the festivities. It made me wonder what the Elder Mother would think of this. She might mistake them for ethereal fairy folk! And would she be happy for the lucky couple, or wistful, waiting for a sweetheart that never came?

The forest path leads to a beach well-used by local folk. There’s traces of old parties everywhere in the charred stone rings, discarded disposable barbecues, and small piles of beer cans. I thought back to the elder’s fiery associations. Perhaps the revellers wouldn’t have taken its wood to cook their dinner. If they did, I hoped the worst thing they suffered was a hangover…

I brought some elderflowers back with me – after asking Elder Mother’s permission – and the scent still permeates my office at home. If the berries have ripened this autumn, I’ll be sure to return to make something to toast the happy couple with.