From relict Caledonian forest:
The seed of an idea
The pride of a community.

Rising from the ashes:
A humble lichen-clad survivor
A steadfast watchman of the Way
A child of the millennium.

Rooted in a landscape shaped by glaciers and memories
Just a cone’s throw away
From the scars of lead
From battles and clearances
A new story is growing. 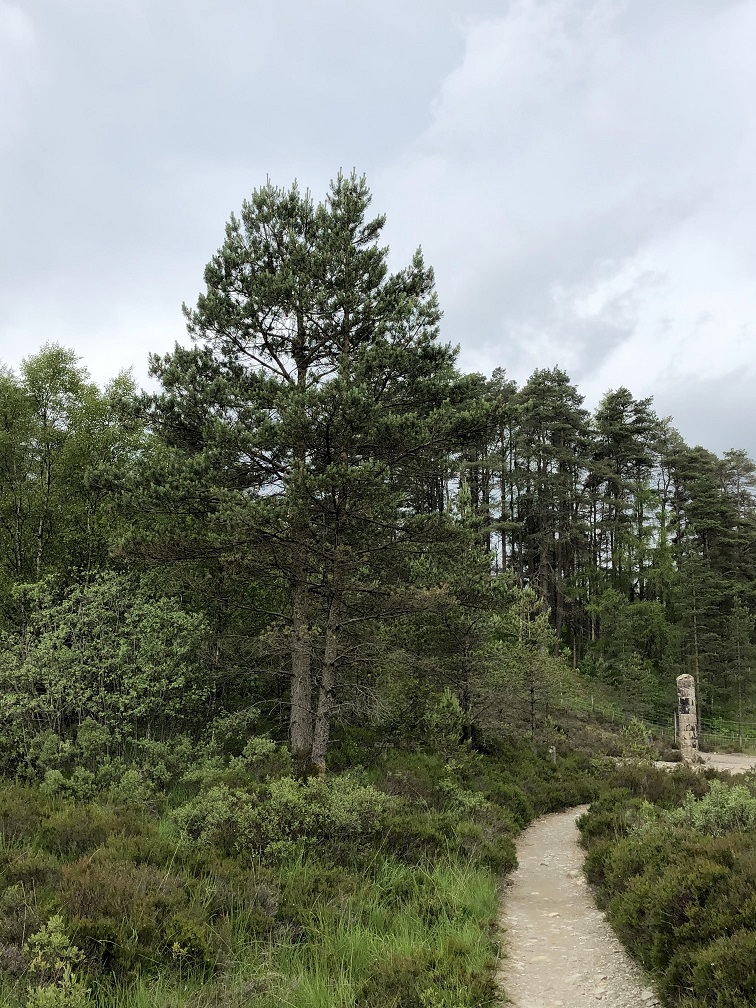 The once and future king of Scotland?

Around 6,000 years ago, huge swathes of Scotland were covered with Caledonian forest – rich, native woodland teeming with life. Towering over everything was the Scots pine, an abundant keystone species forming the backbone on which many others depended. And now, even with the Caledonian forest depleted to just over one per cent of its original area, the pine still rules – the craggy giant king of the trees.

Perhaps ‘king’ isn’t quite right, though. Yes, the Scots pine dominates this woodland, but it nurtures other wildlife as a caretaker or shepherd would, like Tolkein’s Ents. Indeed, there is something distinctly Ent-like about Scots pines, from their skin of rugged rusty bark to their shoulder-like upper branches.

While they can’t walk, they do travel. Unable to regenerate under their own canopy, areas of Scots pine woodland shift every two to three centuries, making them appear to move when viewed over thousands of years.

But what is a Scots pine when it’s no longer a tree? You could say it’s a patriotic symbol after being overwhelmingly voted Scotland’s national tree in 2014. You might point to its building credentials – from ocean-going ships’ masts to sturdy sideboards housing the family china. But after meeting my particular pine, I’d say there’s more to it than that.

Just a few metres from my pine, in a barren clearing poisoned by the spoil of lead smelting, is a plaque installed by the Tyndrum Community Woodland, offering information and this quote:

“We have not just planted a woodland, we are watching an idea grow.”

My tree, along with its brothers and sisters, was planted in the year 2000 using seeds from surviving native forest, replacing local trees destroyed by fire. This community woodland is both ancient and new, resurrecting the trees which have been depleted by centuries of human meddling. It forms part of the Millennium Forest for Scotland and hugs a section of the West Highland Way, Scotland’s most popular long distance walking route.

Every walker who passes through and stops to read the plaque understands that this woodland is something precious, something to be respected and protected. It’s the pride of a community, and a living testament to the belief that we can change the story of how humans and wildlife work together.

At a time when we need our planet’s green lungs more than ever, these gentle giants offer renewed hope.